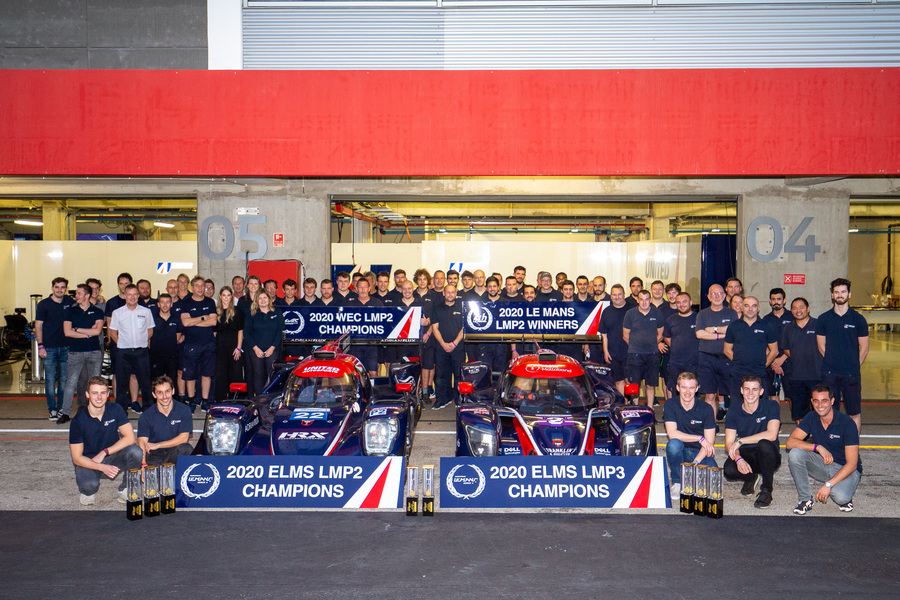 United Autosports have been crowned European Le Mans Series LMP3 Champions for the third time at the final round of the 2020 season in Portimao, Portugal.

The #2 crew of Wayne Boyd, Tom Gamble and Rob Wheldon won the four-hour race to clinch the team’s third LMP3 championship in five years. The three drivers drove a stunning race to win in style for the third time this year after starting from pole position for the fourth time. The team finished 21 points ahead of second place, scoring a total of 94 points after three wins, a third place and four poles.

The pole sitting #32 crew of Will Owen, Alex Brundle and Job van Uitert finished fourth to seal second in the LMP2 standings, giving United Autosports a 1-2 in the LMP2 championship battle. They had a mixed race, with FCY cautions and safety cars not falling their way. All three drivers drove a brilliant race to be running second and third alongside the sister #22 for the latter stages of the race. Job van Uitert scored his first pole position as a United Autosports driver yesterday after a stunning lap, leading the field by 0.441 seconds to second place.

It was a fifth podium out of five races for the #22 Oreca 07 of Phil Hanson and Filipe Albuquerque as they finished the race third - a slow puncture late on in the race hampering their progress - after contact at the start of the race knocked them down the order. The pair were crowned LMP2 champions at the previous round at Monza, ultimately finishing the year 39 points ahead of their team mates in the #32.

The #3 team of Jim McGuire, Andrew Bentley and Duncan Tappy finished a fantastic fourth after a spin early on for Andrew when attempting a pass for second place knocked them down the order. Andrew recovered brilliantly to pass the car onto Jim, who drove a faultless stint to hand the Ligier over to Duncan to bring the car home in fourth.

This championship tops off United Autosports’ fantastic year, after winning the Le Mans 24 Hours in September as well as the FIA World Endurance Championship. They won the ELMS LMP2 title last month, followed by the ELMS LMP3 title today – a feat no other sports car team has achieved in the same year.

“Well what can I say. This is a fantastic result for the whole team to win not one, but two championships in the same series. That has never been done in ELMS before so I am super proud of everyone. Huge credit obviously goes to Richard for putting this team together. A great day to end a great year for United Autosports.”

“It’s quite incredible. I’m massively proud of everybody, the whole team. I don’t think anybody imagined achieving what we have achieved this year. The competition has been really fierce. It’s hard to absorb it at the moment, everything has come thick and fast and to win both titles, Le Mans and WEC and it’s three LMP3 titles in five years so it’s nice to have that back. A huge credit to everybody.”

“Our race was dramatic. I had no where to go at the start and had contact when the car in front of me spun so we had to pit early to repair the nose. Without the two FCYs we would have been no where today. Unfortunately we had a slow puncture at the end so we couldn’t run as much of an aggressive strategy as we hoped. I think second would have been our best anyway. The team made a good recovery. I don’t think we had the car to win today but you can’t have the car to win every weekend but I’m happy to end the season with a podium.”

“I think we were lucky with the way the race went today. Phil had no where to go on the start but these things happen and we had to adapt the strategy. P2 would have been possible today but the slow puncture gave us P3. Five podiums in five races so I think we have to be happy.”

“The race was good for me. I lost one position at the start but managed to get it back. I managed to build a gap to him but then they changed drivers and I just couldn’t hold him off. We didn’t have the pace to beat the #26 so we thought we’d get second, but one thing or another happened with the FCYs and safety cars and we lost out. It was a fair fight from there but we weren’t quick enough to beat the #22. We all did a good job and I’m proud of the job we did. And we got second in the championship.”

“Firstly, I’m delighted to seal second in the championship and another Le Mans entry for the team. I think that’s four for them now! For us it was a bit of a frustrating race. We had a good fight at the front. Will had a great start and I had a good battle with Filipe in the #22, which was really fun and respectful. We leaned on each other quite hard but I think it was fine. At the end of the race we lost out to the #30 and the #22 but fourth is all we needed to take second in the championship.”

“For some reason we had massive blisters on the tyres which made it difficult. We were unlucky with the safety cars and the FCYs, we were quite strong and looking for a strong P2 finish but these things happen. I can take away some positives as qualifying was awesome yesterday.”

“Absolutely over the moon. Towards the end of the race, we knew second was enough to do it but to win was great. And to be honest we deserved it. We were the fastest car out there. The team have done an incredible job this year, always giving us a fantastic car. I can’t thank everyone enough. I’ve been with United for five years now and to finally win the championship with them is amazing. It tops off a brilliant year for the team. I’m so proud to have been involved.”

“I think we knew from the start of the year with the line up we had that it was possible and in pre-season testing we had a really fast car. United prepared so well for this year, we really hit the ground running at the first round and then the same again at the second round. We had a couple of unlucky rounds where we didn’t get the results we wanted or deserved but it has bee fantastic to cap it off with a win. The best way to win the championship. It wouldn’t have been possible without my awesome team mates and this amazing team. United have won everything they have been a part of this year so it’s a pleasure to be part of it.”

“I really enjoyed the race. The team had just put together such a fantastic car for us all year long, I can’t fault that. I drove to the best of my ability which was thankfully enough. Absolutely mega job from the boys. Fantastic.”

“Awesome result, I’m so excited about that. A great way to end the year. We really worked well together as a team and had some good pace towards the end of the season.”

“Fourth place – I’m really happy with that. I think all things considered it’s a really good result for us. Jim had a stonking stint. He really has tried so hard this weekend with regards to the advice Andrew and I have given him. Unfortunately Andrew got caught up in a bit of an incident at the start of the race but that’s racing. I’m glad we finished the year on a high. I just want to say thank you to United Autosports and Jim for having me this year.”

“That was a really hard fought race. Unfortunately the car in front of me in the first ten minutes of the race squeezed in on me when I was making a move for position because I was faster than him and spun me around. I ended up bouncing over the curb and spinning to avoid contact. I think I recovered pretty well and didn’t lose too much time. It put us out of kilter with the rest of the field as we switch strategy, but it was a great race. The fourth place is amazing. At the start of the year we would have taken that. Jim drove such a strong race to get us this fourth place. It was all down to Jim.”