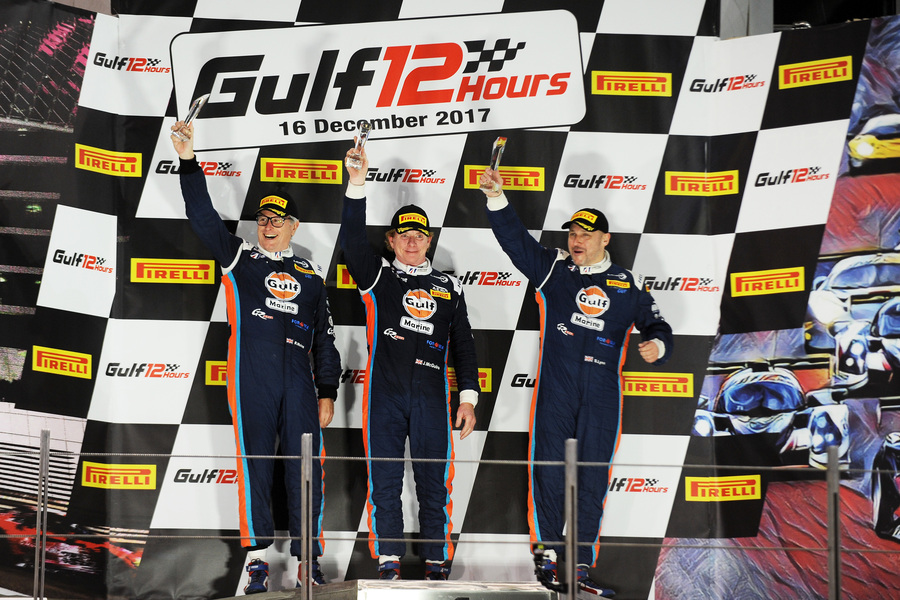 United Autosports have scored a triple podium at the Gulf 12 Hours, including a class win for Richard Meins, Shaun Lynn and Jim McGuire in the #23 Ligier JS P3.

The first half of the 12-hour endurance race started just after 9am on Saturday 16th December, where Johnny and Guy lined up sixth and seventh respectively. Shaun started the race for the #23 team from 15th after a combined qualifying on Friday. All three cars got a clean getaway, and drove almost flawless stints – only pitting when necessary for tyres and fuel. The racing during the first half was cut short as the safety car was deployed with almost 90 minutes still to run. The safety car stayed out as the circuit officials repaired damaged barriers until the end of the six-hour session.

Race two began just as the sun set, with Johnny once again starting the #22 Ligier, this time from fifth place on the grid. Richard Meins started the #23 from 13th and Patrick took the start for the #24 in seventh – the finishing positions from race one. Once again, all three cars made a clean start, with Johnny taking the LMP3 lead on lap one. He had a great battle with the Ultimate Ligier JS P3 for the majority of his opening stint. As night fell, there were reports around the circuit that rain was on its way. Luckily it was only a light shower and although prepared, there was no need to change to wet tyres. During the latter part of the race, Jim McGuire, Richard Meins and Shaun Lynn all set their personal best lap times, getting faster and faster with each lap. They ultimately finished 15th overall, a fantastic result, giving them first in class. Tony Wells, Johnny Mowlem and Bon Grimes were in with a chance of winning the LMP3 class, Johnny hunting down the leading Ligier in the later stages of the race. Guy Cosmo, Patrick Byrne, Mike Benham and Salih Yoluc also drive a great second half, holding the overall lead at one point. At the end of the 12 hours, all three driver crews finished on the podium, with car #22 finishing second and car #24 finishing third.

The next event for United Autosports is the official test for the Rolex 24 At Daytona – the ROAR before the 24 – on 5-7 January, where the team will enter two Ligier JS P217s for Fernando Alonso, Lando Norris, Phil Hanson, Will Owen, Paul Di Resta, Hugo de Sadeleer and Bruno Senna.

“United Autosports did a fantastic job with the car. We managed to improve the car as the weekend went on and by the end of the race it was really, really good. Although I’m quite tired now, I’m really pleased because Bon and Tony did a phenomenal job so to get second in class is great. The win looked like it might have been on for a while, which is why I did the double stint at the end, but it wasn’t quite to be. But second in class is great and I’m looking forward to the next one. Thank you to all of United Autosports for a great job all weekend.”

“The thing that I’ve been most amazed with this weekend is how great the team is – how well they work together and they are so well rehearsed and professional. It’s just a step up from what I’m used to. If I was to be honest, the only faults during the week were with my driving, which I know and I’m going to improve on, but the team didn’t miss a beat. It just goes to show that if you get it right, you get the results. The circuit is great too. It’s quite tricky though as sometimes you’d go out and be on the pace and then other times you wouldn’t be. But all in all, I’ve had a great weekend.”

“I’ve had a nice weekend. Happy to be back with the team and I’m a bit tired to be honest! I found some pace and I was pleased with my lap times. I need to find more pace but we are heading in the right direction. The Ultimate guys did a great job so congratulations to them. The event has been fun, Bon and Johnny were a laugh and I got another trophy rounding off the year nicely.”

“I’ve had a great week. I love Abu Dhabi. It’s a relaxed atmosphere and you get a lot of track time. I think we were all on the pace and we have had a fantastic time and we did the best we could. Hopefully we will be back next year. We are all a lot quicker this year than last year. The competition is tough and we aren’t going to beat the Pro guys, but I’m pretty happy with where we finished – I loved it!”

“Abu Dhabi was absolutely amazing. It was my second time here after racing with United in 2016. I loved the race even more than the first time. I was faster, the car was amazing, as were the team as always. They really helped me progress and get faster and faster so I’m super happy."

“I’ve had a fantastic weekend driving with Richard and Shaun. Three gentlemen – the dream team – that came out here to try and attack the track and we’ve absolutely had a blast. As a combined effort we had good pace and did a good job. The car was great, the team was great and I couldn’t ask for more."

“I’m feeling great after this week in Abu Dhabi. The Gulf 12 Hours is an incredible event on many levels. It’s a very exciting race track and facility and to be back racing with my favourite team is fab. We came into the week with high expectations as we wanted to come away with a podium. We were hoping for the top step but early on it wasn’t really going to be on the cards for us but everyone put in a great effort and the drivers really rose to the occasion so I’m going home happy.”

“Everything was great in Abu Dhabi. United were phenomenal once again and the team worked hard getting the best set up for the car and giving us all the attention in the world. We had two new drivers with Guy and myself this weekend so it was great to meet them. The circuit is nice and the facilities are great. We have had a blast.”

“It was great to do my first proper event with United Autosports. They are a super bunch of people to spend time with so that helps on these kind of events. It was also my first proper endurance race so it was nice to be able to experience all aspects of it. I’m looking forward to getting back in the car hopefully in the new year.”

“The race was a lot of fun. It was not quite the result we were expecting but it was still a good comeback. I loved working with United Autosports – they are a great bunch of guys and girls. Good attention to detail makes everything easier for the drivers.”

“All the drivers did really well this weekend – I’m really pleased with them all. We love this event. It gives us lots of track time and I think we pushed the Ultimate car the best we could for the win in LMP3, so congratulations to them. We’ve got to be pleased with all three cars on the podium. Jim, Richard and Shaun did a great job to beat all their personal best times and get themselves a trophy.”