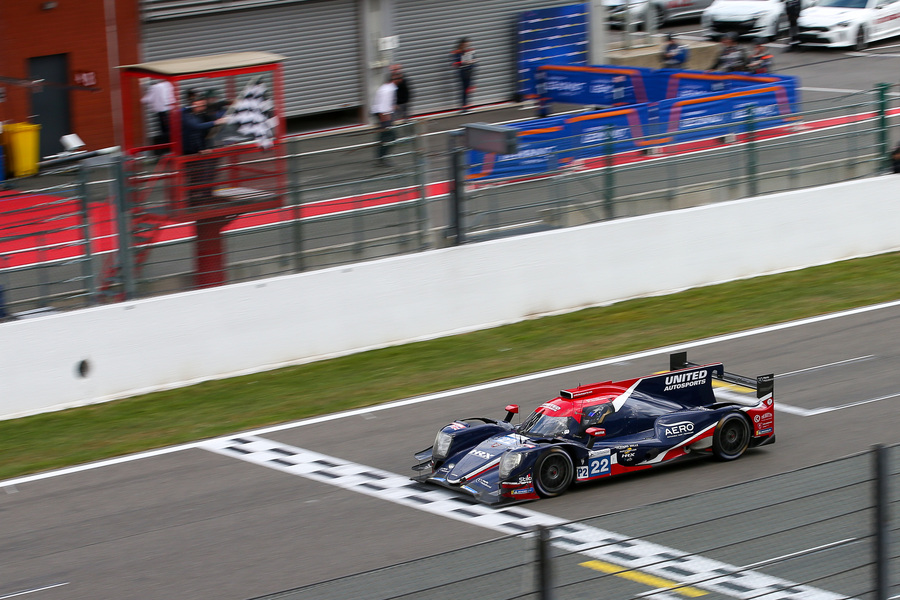 United Autosports have won the 4 Hours of Spa Francorchamps today, as the #22 Oreca 07 of Phil Hanson and Filipe Albuquerque crossed the line first in an action-packed race in Belgium.

The race win marks the team’s first ELMS win of 2019, as well as the first win for the team with the new Oreca chassis. Phil Hanson also scored the fastest race lap, along with the #22 crew topping the timing sheets in both FP1 and FP2 as well as scoring pole position earlier in the weekend – the team’s 50th pole position since they began racing.

The next race for the team is the second round of the FIA World Endurance Championship at Fuji, Japan on 4-6 October.

Phil Hanson lined the #22 up on pole position after a stunning lap by Filipe Albuquerque on Saturday afternoon, posting a time 0.739 seconds faster than the rest of the field. The #32 started seventh with Will Owen behind the wheel after Alex Brundle’s qualifying efforts the previous day. Phil made a great start and led his first stint, pulling away from the rest of the field. Will dropped one spot to eighth on the start but soon recovered and was up to fifth by the time his first pit stop came around. After a double stint, Phil handed the #22 car over to Filipe and Will handed the #32 over to Ryan Cullen after running second and third for the majority of the second stint. Both Filipe and Ryan ran well, until Filipe picked up a puncture after running over another car’s debris causing the #22 crew to stop and change the wheel with just over two hours of the race left to go. As the second safety car was deployed, the #22 crew pitted again for a splash of fuel, but as Filipe left the pits, the red light at the end of the pit lane was on, meaning he could not rejoin the track straight away, dropping him down to eighth. The #32 pitted with Ryan handing the car over to Alex Brundle after a great stint, battling with the other cars around him. Alex continued the good form of the #32 crew, until his door latch broke and the door opened, meaning the team had to pit again for repairs only four minutes later. With just over an hour left to go, Phil got back in the #22 and rejoined in second place. He set about closing a 20 second gap to the leading car, until they got pinged with a drive through penalty with 15 minutes remaining and Phil had closed the gap to just five seconds. Phil took the lead on lap 95 and brought the car home for the team’s first win in the 2019 ELMS six laps later. The #32 car ultimately crossed the line ninth.

Garett Grist started the #2 LMP3 car from eighth on the grid, with Christian England starting P10. Garett dropped to 10thon the start, with Christian P11. The pair were running in 10th (#3) and 13th (#2) until the first pit stops, when Wayne Boyd and Andrew Bentley took over. The pair made up places during their stints, Andrew Bentley racing for the first time in the ELMS, standing in for an injured Mike Guasch who was watching back at home in California. After fighting through the pack, Wayne pitted the #2 and handed over to Tommy Erdos in P11. Andrew was running as high as fifth by lap 56, with Tommy running second by lap 58. Andrew handed the #3 car back to Christian for the final stint, while Tommy stayed on board the #2 till the end of the race. Christian brought the #3 home in fifth place, while Tommy had an unfortunate accident on the last corner while running fifth and chasing for a higher position on the last lap. He spun and hit the wall leading to a DNF for the #2 crew.

“I’m really happy. It’s a year since our last win here. And it’s funny because we had a DNF at Silverstone last year and then won the next race at Spa, which is the same as has happened this year. We then went on to win at Portimao too, so we are one step to doing the same thing this year. We had a great weekend. The pole from Filipe, the fastest race lap from me and then the win. And it wasn’t an easy race either which makes it all the more satisfying. We could control the race from the start but then we had a puncture and the strategy meant that we would be struggling with the fuel but we got really lucky with a safety car and FCY which brought us back on strategy. I was able to hunt the leader down and was catching him consistently every lap. It looked like it was going to go down to the last lap, but we got lucky with payback from the puncture when the leader got a drive through. We could then just sail home.”

“I think it has been the perfect weekend. Fastest in both FP1, FP2, qualifying, fastest race lap and now the race win. Even with the set backs we had during the race, the puncture where I had to come in, adapt the strategy and then chase for the lead and get the win. That makes the whole difference with this win. Today Phil did an amazing job from the beginning to the end, Gary our engineer, the whole team. Especially coming back from Silverstone where the tension is then more on you and the team but in the end it is just remarkable win and weekend. It’s a perfect win and a perfect weekend, I’m super happy.”

“Will did a great job at the start making his way up the field. With his pace I knew we were on for a good race. Ryan really kept that going during his stint. I jumped in with two hours to go but unfortunately the door catch failed. I tried to fix the door while I was driving but it wasn’t possible so we had to pit and we ended P9. I’m gutted for the team who have put a car together in such a short space of time.”

“We started seventh and Will did a great job during the start. My double stint was pretty steady. I just tried to keep up with the leaders. I don’t think we deserved P9 today, we could have done a lot better as I think the pace from all three of us could have put us on the podium. Portimao is a track I like so we will look ahead to that and hopefully we will have a bit more luck.”

“It’s been a while since I’ve been in a car with top pace so it was really refreshing to have a good opening stint today. United have done a top job with the Oreca and we had one of the fastest cars on track and it was a lot of fun to drive. Ryan and Alex also did a good job. We had to do an extra pit stop unfortunately which ruined our race as I think we had the pace to be up there with the #22. Congrats to them. We are excited for the next one now we know we have really good pace.

“I’m not really sure what to say about this race. We managed to make it through the first lap with no contact which I was very happy about. I had zero grip so I really struggled out there. Wayne did a great job making some progress. Tommy was in for the last two hours and we got ourselves back into contention but unfortunately on the last lap we ended up not finishing. Not getting any points today hurt our championship hopes so it’s been a rough day today.”

“I had good pace in comparison to the Ultimate car in front. But I just didn’t feel like I had any tyres left. I was pushing as hard as I could as I knew it was for position. We had a bit of an advantage over him in sector two, but the tyres made it difficult to keep the car on the track. I was right up with him on the last corner and it was going to be a drag race to the line. I just put my foot down leaving the last corner to try and get him, but it didn’t work and I spun and made contact with the wall. It could have been a P4, but really it was a P-nothing. I’m gutted and very sorry for the whole team.”

“It was a very disappointing race. We came into this weekend think we could try and fight for the win which would move us up in the championship so we could fight for it at the last round, but it really didn’t go to plan at all. I really enjoyed my stint and I was happy with my pace and I was able to gather a few positions back. It’s a real pity what happened with Tommy at the end but obviously when you’re trying to push for positions sometimes that can happen. Thank you to United Autosports as always and we will move onto Portugal.”

“I’m pretty happy with the result and my stint overall. I kept it fairly clean, the pace was relatively strong and the car felt ok. I just focused on keeping it clean and bringing it home. Working with Christian and the team was great. We both worked really hard, the whole team did. The pit stops were faultless too so they really did their bit too.”

“We got a good result but we expected more to be honest. The car was a bit of a struggle, low grip. I picked up a little bit of damage in the final stint. Andrew did really well to say he was thrown in at the deep end with this being his first race weekend in the ELMS. He had solid pace. We all wish Mike well and hope he has a speedy recovery.”

“Awesome result for Phil, Filipe and the #22 crew. Bad luck for #32 with the door issue they had, but I’m sure they will come back strong at the next race. The LMP3 team had a rough time too. A P5 and P6 looked promising"

“It’s exactly a year since we were here winning in the rain in Spa so it feels nice to have won this year where it went the full distance and I think everyone was chasing us for pace rather than us chasing them. We’ve been quick in every session since we’ve got the Oreca so I think a win was deserved for the team. I feel desperately unlucky for car 32 because on our pace with both cars, I think everyone will see that it could have been a closely fought race between both our cars and could have been a 1-2 for us. Then in LMP3, Tommy’s done really well and has been on the podium three races running and he doesn’t make many mistakes. But that was a race to the line and I think unfortunately it wasn’t to be. We haven’t got a car in LMP3 at the moment to challenge for the win with the race pace. I can’t wait to get to 2020 with the new cars to give everyone a competitive chance there as the only way we are getting on the podium at the minute is through no mistakes and fantastic team work.”