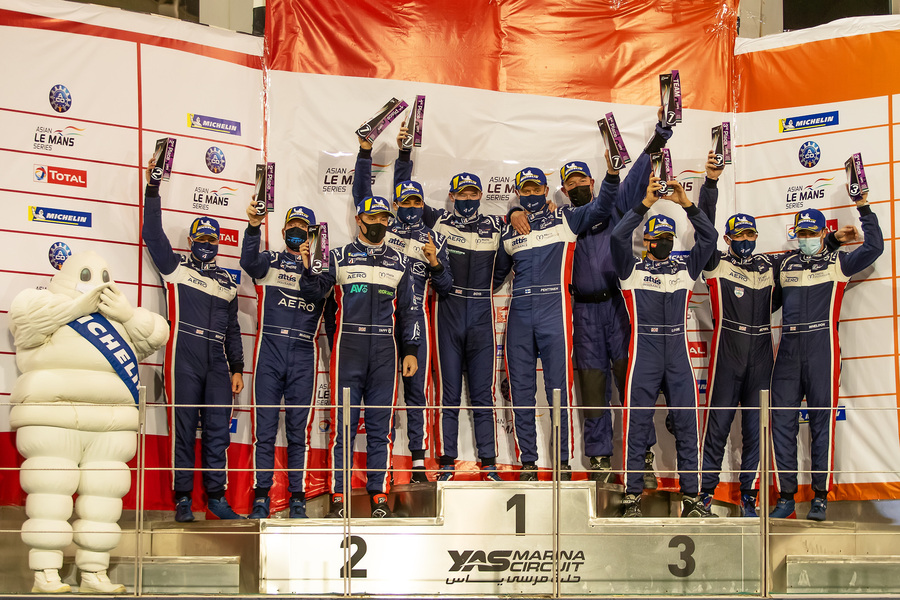 United Autosports have won the 2021 Asian Le Mans Series LMP3 Championship after the #23 crew of Wayne Boyd, Manuel Maldonado and Rory Penttinen won the final race of the series in Abu Dhabi.

The #23 crew of Wayne Boyd, Manuel Maldonado and Rory Penttinen won the race from second on the grid, marking their third visit to the top step of the podium in the championship, after a disappointing DNF in yesterday’s race.

Completing their 1-2-3 podium lockout was the #2 crew of Ian Loggie, Andy Meyrick and Rob Wheldon, who crossed the line third in today’s race after a DNF yesterday. The trio also finished fourth in the championship standings at the end of the four race series.

The next race for the team is the IMSA WeatherTech SportsCar Championship Mobil 1 12 Hours of Sebring, held on 18-20 March.

“What a result today with the 1-2-3, the championship win and a championship second place. A great way to start the year following on from our awesome season in 2020. Very proud of the whole team today after a tough couple of weeks for them all. They certainly deserve this.”

“Winning the Asian Le Mans Series has rounded off an incredible 12 months for the team. I am super proud of all the drivers and all the team, including those who have been following back home. To finish the final race with a podium lockout is a testament the the professionalism of all involved.”

“It’s great to be part of the team today. An awesome result for United Autosports finishing 1-2-3 on the podium and congratulations to them on winning the championship with the #23 car too.”

“The car was fantastic for the race today and United made the right calls. I’m just disappointed with the penalties we received that denied us the race win. But overall it’s been a fantastic experience and an awesome team result to take all three places on the podium today. Well done to the #23 crew on the championship win.”

“I can’t believe this weekend. It’s been absolutely mega. Race one was really tough. I got jammed up into the first corner and ended up dropping back into the GT cars but I had some good battles with the pros in those cars. Duncan and Andrew pushed hard and we ended up on the podium which was an amazing result after how hard the start of the race was. Today I got a good start. I stayed clean and handed over to Andrew who did a mega job as did Duncan and then we ended up P2, which was fantastic. An amazing result after all the hard work the team have done and not just over the last three weeks out here. It was great for us to bring the car home to take second place as well as United finishing first, second and third and winning the championship. Fantastic!”

“What can I say? Second in the Asian Le Mans Series championship for the #3 crew. It was great to give the team that result, along with the championship win for the #23 crew. Three out of four podiums for us as well. I think we did a really good job and worked together really well. Jim has really upped his game this season and it’s been a great team effort. It was the perfect test session for us heading into the European Le Mans Series. I can’t wait to get going. Thank you to every single person from United working relentlessly for the last three weeks. It’s been a gruelling schedule for everyone with some really late nights and early mornings so thank you to the whole team.”

“We came second in the race today and second in the championship, which is just awesome! We came here as a pre season test really. Our expectations were positive and we were hopeful of some strong results but to come away with second in the championship and finishing on the podium in three out of four races is pretty extraordinary. Both Duncan and Jim did great. A huge thanks to the whole United team, especially the guys on car #3. It’s been a tough couple of weeks and they didn’t drop the ball once so an awesome effort all round. Huge thanks to Jim, United, Richard and Zak. To finish the final round of the championship with a championship win and second place for us, but to have all three United cars on the podium as well is just an extraordinary thing. A real boost for the team. I’m looking forward to ELMS now.”

“It’s amazing to get the championship and the win in the last race. It was a bit chaotic with the DNF yesterday making it a little bit harder. But I’m over the moon, the team have done a fantastic job. It has been amazing to share the car with Rory and Wayne over the last two weekends and to join United Autosports. I feel like I’m already part of the family so I can’t wait for the start of the European series. Massive thanks to Richard, Zak and United for giving me this opportunity. It was great to get the win to seal the championship.”

“What a day. My 50th race with United. A race win and the Asian Le Mans Series Championship win – it couldn’t have gone any better. A fantastic job by everyone. Both Rory and Manuel did great stints and the guys gave us a fantastic car – everyone played their part. Fantastic for United to have a podium lockout. It’s not very often you see that and it speaks volumes about the team. They’ve done a phenomenal job throughout this series and they always do. A huge thanks to everyone.”

“A super day. We did the job we needed to do today. I had a good start, but we had to contend with the safety car periods, but after that we led a lot of the race. Both Manuel and Wayne did the job and we came home with a win. We worked hard for it today. It’s super to have three wins out of four and the championship too. It’s my first championship win too so huge thank you to United Autosports, Richard and Zak. I’m really so happy. I hope I can come back and race with United Autosports again.”