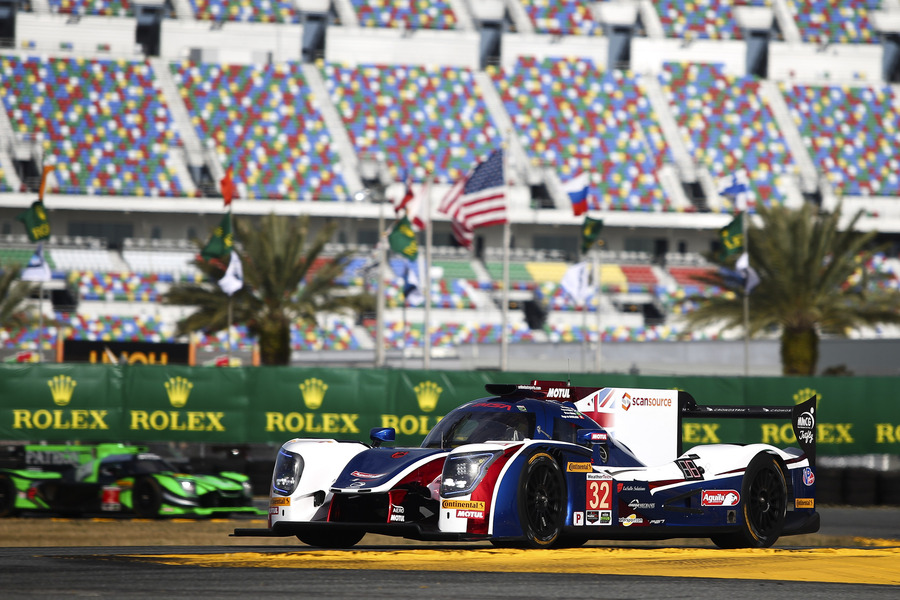 United Autosports’ co-owners Zak Brown and Richard Dean have vowed to make a quick return to the Daytona International Speedway after the Anglo-American team made a big impression in the Rolex 24 this weekend (27-28 Jan). The outfit’s brace of Ligier JS P217 LMP2 sports-prototypes both led the race at various times and were inside the top-10 and vying for podiums for the majority of the race. The UK-based team ultimately achieved fourth (#32) overall and 13th (#23) in class on its full Rolex début, a puncture plus brake and throttle sensor issues afflicting the #23 while a clutch malfunction with just over five hours to run demoted the #32 from third-place. The United entries undoubtedly made a massive impact in the opening round of the IMSA WeatherTech SportsCar Championship.

The United Ligiers ran inside the top-nine after two hours while both cars led briefly (Alonso & Di Resta twice) during pit-stop phases inside four hours, the #32 leap-frogging the “sister” Ligier at 6pm – the United cars leading the way in LMP2, the highest-placed non DPi cars. McLaren F1 test and reserve driver Norris had taken the #23 back ahead of the #32 and into sixth after five-hours just prior to a rain shower – Lando running third – the fastest car on-track in the treacherously slippery conditions – and led prior to pitting for slick tyres. But the #23 running sixth with 2016-17 LMP3 Asian Le Mans Series champion Hanson at the wheel, cruelly collected a right, rear puncture just after 10pm, the flailing rubber necessitating a rear deck and tail change with Alonso resuming 11th but crucially over three laps down on the leader.

The #23 had recovered brilliantly to sixth but at 1am, Alonso suffered a “long” brake pedal rectified by a new brake master cylinder, Norris returning to the race 16th in class and now 25-laps down after garage repairs lasting 40mins. Meanwhile the #32 crew continued to set consistent times with clean laps and lay an excellent third at mid-distance having quietly but efficiently moved up the leaderboard. Cruelly, with almost 18hrs completed, the #32 suffered a clutch problem losing 10mins which dropped the car two places to fifth although the driver crew spent the closing stages battling for fourth place. The team decided that as the #23 could not gain any further places in the final 75mins, a decision was made to park the Ligier until the final laps to save the car from unnecessary additional wear and tear.

A combined 6,250-miles achieved at the unique Florida venue since Thursday’s opening practice session will serve as good experience for United which will return for three further IMSA races this season starting with the Sebring 12 Hours (17 Mar). Crucial data concerning the new front aerodynamics being raced on the Ligiers for the first time will prove invaluable for the remainder of United’s season – both in the U.S. and Europe. Additionally, experience with the Continental tyres and U.S. competition in general gleaned this past week should again put United in contention in the remaining three Tequila Patron North American Endurance Cup races.

The UK-based team has quickly taken the sportscar scene by storm in Europe and will embark on its mission to win the European Le Mans Series LMP3 title for a third consecutive year and its maiden LMP2 title – having finished second in the standings in its début year in that category – at Paul Ricard (F) in April. In addition to the six-race ELMS programme, plus a Le Mans 24 Hours entry, United will contest the remaining three Tequila Patron North American Endurance Cup rounds – which also included this weekend’s race – at Sebring, Watkins Glen and Petit Le Mans with its LMP2 Ligier.

STORY OF THE RACE

“We’ll be back! We’ve had an awesome week at Daytona. We were consistently in the top-five and led the race with both cars. All of our drivers excelled and thoroughly enjoyed themselves.”

“It’s been a tough week which ultimately turned out okay. It feels strange to be slightly disappointed with a fourth place band miss out on a podium but after the preceding days when we struggled with pace, that’s how I feel. In the race both cars were competitive and all seven drivers strong. Fernando was a great influence on the younger drivers. Top speed, handling, drivability and tyre management was all really good.”

“I have a positive feeling about this weekend’s race and the whole event, I really did enjoy this a lot. I love driving and doing this for 8 or 9 hours in a race is great! Unfortunately, we had too many issues that were out of our control, some unlucky situations like the puncture. In one of the first opening stints we were the fifth car of five on the lead lap but with the puncture we lost four laps as there was also quite a lot of damage on the car. Entering the night was quite a good part of the race, as the car felt quite competitive, surprisingly, as it had never been like that before. We made some changes after practice and qualifying and today we were consistently one of the three fastest cars. That gave us a lot of confidence going into the night, we recovered two laps, also thanks to the safety car periods. After that we had some brake issues which the team had never experienced before and we lost a lot of time. The team also suffered bad luck with our sister car that was in the running for a podium finish but then had a clutch problem. But despite the issues we had, I have a good taste in my mouth as I learned how to cope with the fatigue, traffic management, full course yellows, night driving, driver change procedures, driving preparation between the stints like how much rest you need to have and the amount of time you need to allow in the garage before taking over the car again. So, if and when I ever do another 24hr, I’ll be much more prepared as it’ll be my second time. Now I think I can drive prototype cars at a higher level than two weeks ago, as I now know things I didn’t know 24 hours ago. But the nicest thing of all and a boost of confidence was how competitive we were. United Autosports did an amazing job. With a package, which at the beginning of the event, seemed to maybe not be as competitive as others’ out there, they managed to turn the situation around and gave us a competitive car. The mechanics, in spite of the many issues we had in the race, kept focussed and motivated throughout, proving an incredible dedication. Also, the harmony with my team-mates was great, young but impressively mature and prepared. I am leaving Daytona with great memories and a lot of things I have learned.”

“It’s a ‘hectic’ track to race on as it’s short so you encounter a lot more traffic compared to Le Mans for example. But the [flood] lighting here is amazing. I had no warning of the puncture and even stroking it gently back to the pits at 30kph, the tyre carcass unfortunately caused a lot of damage to the bodywork.”

“It’s been a lot of fun and I’ve enjoyed it. We had some setbacks but all three of us continued to push to the end. I think we did a good job with the package we had. It was very difficult when it started raining last night. Initially I was told it wouldn’t rain for long but then it got heavier making conditions tricky. I made up ground but I had no clue what position I was in, I certainly didn’t think I was near P1. It was a cool stint and very enjoyable. You’re forever overtaking cars, you can’t relax much.”

“It’s a very different kind of an event that I more used to in Europe. I found the track physically tough too – due to the banking and the fact the direction runs anti-clockwise which again is quite unusual compared to what I’m used to. That said, I loved driving at night under the floodlights. We had some issues that cost us time. I was running out of fuel so had to make an emergency pit-stop under FCY with the pits closed so then had to pit again to hand the car over to Will who then had to serve a drive-thru for my emergency stop.”

“I’ve thoroughly enjoyed my first ever 24 hour race. This kind of racing has all been very new to me. We had some ups and downs with the car that cost us time, some just plain bad luck plus some mechanical issues that probably ultimately cost us a podium. The track is aggressive, bumpy and so hard on the cars. But I’ve loved it, the team have excelled and a race I’d love to come back and do again.”

“It wasn’t easy to achieve the result and we faced many challenges on the way. I had every faith in United making the right decisions for the race. It was a very competitive field and as an American to come back home and get this result is really special. When I put the clutch in to stop the car on Sunday morning it just went to the floor. I’d handed the car over to Paul but there wasn’t any pressure so he couldn’t take off. We just ran our own race, concentrated on ourselves, but getting that problem was a real sucker. I survived a couple of hairy sideways moments in the rain on Saturday.”

“We were never going to be the fastest car out there so our aim was to be tidy and consistent. I got into the car when it was raining on Saturday and that was tricky. We tried to be safe when we switched back to slicks. We had to change the tail as we’d picked up an electrical gremlin which could have affected the rear lights.”