United Autosports to the fore once more in ELMS 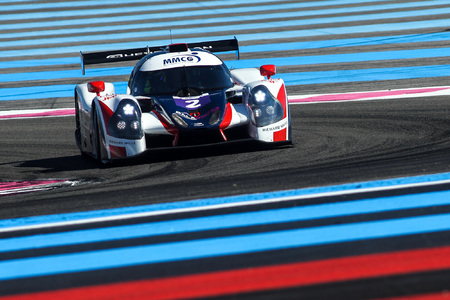 Four European Le Mans Series races and five LMP3 podiums for United Autosports. That’s the staggering statistic for the Anglo-American team competing in its maiden ELMS season after the latest race in France today (28 Aug). Alex Brundle/Christian England/Mike Guasch swept their #2 Ligier JS P3 to third place in the 4 Hours of Le Castellet – the trio’s fourth straight ELMS podium. Although the race marked the first time United did not win LMP3, this latest success for the UK-based outfit sees them continue to lead the Teams’ standings, while Brundle/England/Guasch lie first in the Driver’s championship with two races remaining. For the sister car of Matt Bell/Wayne Boyd/Mark Patterson, it was another “if only” weekend for the unfortunate trio whose luck must change soon.

Brundle claimed fourth position on the 20-car LMP3 grid on Saturday while the #3 Ligier, missed qualifying completely due to an engine/gearbox change necessary after the car had lost power early in the final practice session. Brundle and Bell took the start in sweltering sunshine on Sunday afternoon in the #2 and #3 Ligiers that were running low and high aerodynamic configurations respectively – England and Boyd the only two United Autosports drivers to have no previous race experience on the fast, sweeping 3.64-mile Paul Ricard track.

Brundle was third at the end of the first lap while Bell had made up five LMP3 places before being summoned by the race officials to serve a two minute “stop-go” penalty, for its engine change, on lap three. Alex had slipped back to fifth with 30 minutes gone, his #2 Ligier suffering from a mysterious issue that severely affected straight line speed. Brundle pitted and changed driver to Guasch with a little under one hour on the clock with Patterson taking over from Bell five minutes later – Mike and Mark running seventh and 18th respectively after the stops. Shortly after mid-distance, the race’s second Full Course Caution, when the field must reduce its speed to 80kph, saw Guasch hand the seventh-placed #2 car over to England while Patterson pitted for fuel and tyres under green race conditions.

England and Patterson were both setting consistently fast lap times, Christian moving up to third place with an hour remaining and actually making his final fuel stop in the lead moments after Mark handed his 13th placed Ligier to Boyd with 50 minutes to run.

With 30 minutes remaining, England lay third, 17 seconds behind the class leader and five behind the second-placed car, while Boyd, consistently the fastest LMP3 car on track during the last hour, was up to 12th.  England took the chequered flag third – 32 seconds behind the LMP3 class leader – with the #3 Ligier taking a hard-earned 11th – Boyd setting his car’s fastest lap at the very last lap.

The penultimate round of the six-race ELMS is staged at Spa-Francorchamps (Belgium) on 25 September.

In aid of Macmillan Cancer Support, Richard Dean along with ELMS championship leader Alex Brundle “Braved The Shave” on Saturday. Fellow United Autosports co-owner Zak Brown did the honours on Richard while Christian England sheared his co-driver. For the past two years, Dean himself has been “all clear” having been diagnosed with cancer almost three years ago. He underwent six weeks of treatment that included chemotherapy and radiation. Senior Engineer Paul “Flower” Haigh, #2 engineer Gary Robertshaw, #3 No1 mechanic Ken Clayton and team truckie John Kitson also experienced a close shave. Donations can be made at https://bravetheshave.org.uk/shavers/richard-dean/

#2 Brundle (GB) / England (GB) / Guasch (USA) – Ligier JS P3
Alex Brundle (GB). Age: 25. Born: King’s Lynn, England. Lives: London, England.
“This has been the toughest ELMS weekend we’ve had in terms of managing car balance. Fourth on the LMP3 grid was a decent recovery after the various downforce changes we’d made. In the race, the car had a top-speed issue and we currently don’t know why. I didn’t have the pace on the straight. It was then a case of making the best out of things – Mike and Christian drove awesome stints and we’re still well ahead in the standings.”

Christian England (GB). Age: 34. Born: Barnsley, England. Lives: Huddersfield, England.
“Third place is a good result after what was damage limitation in terms of the car’s lack of straight line speed and the championship is still looking good for us. My two hour stint was pretty tough especially running out of water less than halfway through but this was what is likely to be the hottest race of the year.”

Mike Guasch (USA). Age: 58. Born: Palo Alto (CAL), USA. Lives: Martinez, (CAL), USA.
“I tested here on Wednesday and went quicker than I’d ever gone – I love this place and already can’t wait to come back here next year. We changed the car a lot over the days. I completed a clean stint in the race but I wasn’t that happy with it being ultra-critical. We’re still well ahead in the title race and looking to consolidate at Spa.”

#3 Bell (GB) / Boyd (GB) / Patterson (SA) – Ligier JS P3
Matt Bell (GB). Age: 26. Born: Newcastle, England. Lives: Stamford, England.
“It’s been another tough weekend for car #3 – the tide of luck doesn’t want to turn our way. The engine change meant we missed qualifying which meant we started from the back of the grid and early in the race I had to serve a two minute penalty in the pits which seemed harsh but it’s the rules. The annoying thing is I firmly believe we had the pace to be right up at the front here. I made a mega start making up places. Car felt good in what was a busy stint traffic wise.”

Wayne Boyd (GB). Age: 25. Born: Belfast, Northern Ireland. Lives: Templepatrick, Northern Ireland.
“It’s a ‘what could have been’ weekend again for us. Starting dead last and with the time penalty always meant the race was going to be very difficult for our car and immediately put us on the back foot. But the race pace of all three of us was actually very good and I enjoyed my stint.”

Mark Patterson (USA). Age: 64. Born: Port Elizabeth, South Africa. Lives: Cabo San Lucas, Mexico.
“Going out on old tyres after Matt’s opening stint was a little challenging but I got new rubber for my second stint – it made for a completely different ‘Disney ride’ which was great fun. I wasn’t particularly fast but more steady – I did the best I did, brought it home in one piece for Wayne to take to the finish.”

Zak Brown (USA). United Autosports Team Owner. Born: Los Angeles, California, USA. Lives: London, England:
“The important element today was to consolidate our championship lead and that was achieved. It wasn’t a straightforward weekend by any means but everyone at United Autosports pulled together and made the best out of a difficult weekend. The team will go away, analyse data, and come back even stronger at Spa.”

Richard Dean (GB). United Autosports Team Owner and Managing Director. Born/Lives: Leeds, England:
“I’m relieved to have got a podium. Car #2 wasn’t the fastest today but all three drivers did a fantastic job. They didn’t put a foot wrong while their pit-stops were spot on. But Car #3 again . . . the entire weekend hasn’t gone right for them and that’s now the last three races they’ve suffered terrible luck – two punctures and this weekend’s engine issue totally out of their control. Nevertheless they pulled a lap back after effectively losing a lap and a half due to the time penalty having started from the back of the grid. Matt made up a huge number of places, Mark was phenomenal while Wayne was the fastest [LMP3] car on the track in the last hour.”