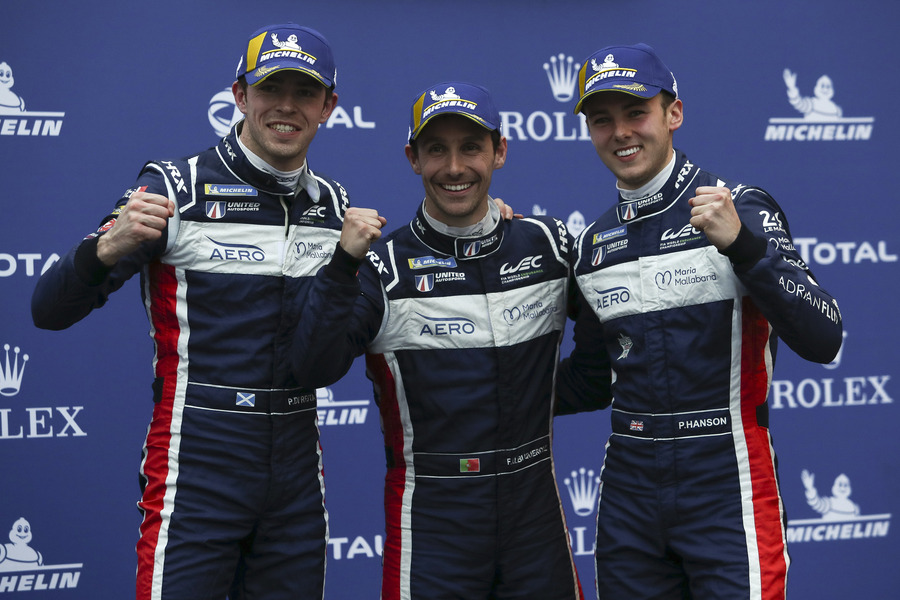 United Autosports leads the LMP2 FIA World Endurance Teams’ Trophy title race after Phil Hanson, Filipe Albuquerque and Paul Di Resta brilliantly won its second consecutive WEC race – the British team’s fourth consecutive top-three placing. United’s four-point series lead comes courtesy of a fantastic fight back up the leaderboard by the United trio plus perfect tyre strategy from the United pit wall in the 6 Hour Lone Star Le Mans event staged at the Circuit of The Americas in Austin, Texas, today (23 Feb). It was the first time United and Hanson had ever competed at CoTA, the first time Di Resta had raced a sportscar there after two Formula 1 GP starts (2012/13) while for Albuquerque, it was only his second race at CoTA after a second-place finish (LMP2) in 2016. Round six of the eight-race season is held at Sebring, Florida, on 20 March.

A fantastic start by Di Resta from the front row of the LMP2 grid saw him snatch the lead at the first corner, the weather dry overcast, cool and breezy, but a handling imbalance dropped the #22 to fourth 15 minutes in. An efficient fuel-only pit-stop promoted Di Resta a place but running on soft quali tyres continued to severely hamper his pace – the #22 completing the first hour placed fifth. A struggling Di Resta, pitted early from seventh for a full service to Hanson who resumed eighth – the United Oreca now running out of phase compared to the rest of the LMP2 runners.

A very impressive stint saw Hanson take the lead before pitting for fuel nearing one-third distance, the young Briton re-emerging sixth. The #22 led once more before stopping for a full service to Albuquerque. The Portuguese led at mid-distance, pitting again for fuel/left tyres and re-joining third before moving back into the lead with a little over two-hours to go, continuing the yo-yo effect due to the different timings of pit-stops for United’s rivals.

Di Resta took over from Albuquerque, who had once again, produced a stellar performance, the Scot slotting into third and heading the field with 90 minutes left – the ex-F1 driver, unlike his two race opening stints, able to press on fast and very hard. He pitted for fuel with 63 minutes left, resuming in the lead but fully aware a fuel splash would be necessary before the chequered flag. Di Resta duly stopped again with 20 minutes to run, remaining in the lead, and took the chequered flag, first in LMP2 and fourth overall, a comfortable 24 seconds ahead of the second-placed LMP2 car.

Phil Hanson
“A second consecutive win which takes us into the championship lead – a great start to 2020! I’m very happy. It was hard, very hard and a bit of a rollercoaster kind of race. Much more difficult than our Bahrain win. I managed to get us into the lead in both of my stints. I enjoyed my second one better but overall I felt I put in a strong and solid performance. I can’t wait for Sebring to come around.”

Filipe Albuquerque
“An outstanding job by United in every department. We struggled at the beginning which was no fault of Paul’s – it was the [tyre] strategy we’d chosen. But we felt this would pay off later in the race and that’s how it turned out. We weren’t necessarily the fastest car today but were definitely the most consistent over the entire six-hours. I pushed hard in my stints, absolutely on the limit.”

“It’s good to be leading the championship with this second win and the momentum is now with United Autosports. I had difficult opening stints and had to cut the second one short and it looked like it would be hard to come back but we were very strong at the end and everything worked out how we’d planned. We now focus on extending the lead at Sebring which is a nice long one. Looking forward to it.”

Zak Brown, Team Owner and Chairman, United Autosports:
“Wow, that was some race! An awesome performance by the team – strong drives by Phil, Filipe and Paul but also brilliant strategy from the guys in the pits who played a huge part in today’s success. A stunning all round performance that deservedly gives us the championship lead heading to Sebring next month.”

Richard Dean, Team Owner and Managing Director, United Autosports:
“It’s fantastic to win a second race in a row. To be leading the championship is the best place to be but we need to be in that position after Le Mans in June! The three drivers and our engineers were absolutely magnificent today. We took the pain with regards tyre management early in the race whereas our rivals suffered from mid to late race. It was a case of coming from behind but Gary [Robertshaw] and Dave [Greenwood] on the pit wall never lost focus. Credit to the entire team with flawless and fast pit-stops.”