United Autosports leave rounds 13, 14 and 15 of the GT Cup looking at the positives from their weekend at Snetterton, Norfolk. 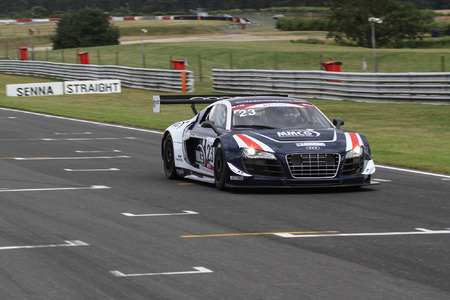 Phil Burgan put his Audi R8 LMS ultra on pole position on Sunday morning, for the first of two sprint races. Sunday started dry but the rain came just before the start of the first race. Phil lined up on pole position, but struggled with pace in the wet and dropped down to fourth on the first lap. Phil wasn’t able to show the wet pace he had at the previous round at Silverstone, due to a suspected broken engine mount, and finished the race in eighth place overall, fourth in the GTO class.

Phil lined up third on the grid on Saturday for the 50-minute pit stop race after a wet qualifying, which was littered with red flags. Phil held the top spot on the timing screens for most of the qualifying session, but was unable to better his time due to the lack of track time as a result of so many red flag periods. He had some great battles throughout the race, but a spin as he entered the start-finish straight dropped him down to seventh. After the pit stop, he made up two places to eventually finish fifth overall and fourth in class.

Unfortunately, the team had to make the decision not to start race three, due to broken engine mounts sustained in race two. There wasn’t enough time to take the engine out and repair the broken parts so Phil could go out and race safely.

The team will return to the championship at Brands Hatch on 15-16 August.

“The pole position shows Phil has the pace in the car. He’s had a long break and has done some racing in a Maserati, but he was back on the pace one he got dialled into the Audi again. It’s disappointing that we couldn’t start the second race due to the broken engine mounts, which looks like a hangover from an incident earlier on in the weekend but we will come back at Brands Hatch I’m sure.”

“We have had some ups and downs this weekend. Friday testing was good, I qualified well on Saturday and finishing fourth in class after a spin was a decent result. The pole position in Sunday’s qualifying was a highlight of the weekend but during the race I just couldn’t replicate the strong lap times I showed at Silverstone or in testing on Friday. I couldn’t seem to make the car do what I wanted it to do and obviously that was down to the broken engine mounts. Disappointing to not be able to start the last race but that’s racing.”