United Autosports finished the opening round of the 2017 Henderson Insurance LMP3 Cup Championship on the podium.

Tony Wells and Matt Bell brought their #3 Ligier JS P3 home in second place at the end of Sunday's race. Tony qualified the car third on the grid for both races, with Christian England lining up on the front row in second.

Sunday’s race was a replay of Saturday as Paul Bailey lined up on pole position but dropped back as Christian England took the lead into the first corner, with Tony Wells following through to take second place. Christian stretched his lead out over team mate Tony, only for it to be reduced as the safety car was deployed to rescue a stranded car. The United Autosports duo led the pack round Donington Park until the pit window opened.

Andrew Evans - in his LMP3 race debut - took over the wheel of the #2 Ligier JS P3 from Christian England at the half-way point of the race. Andrew struggled with the pace of the car in the second half of Saturday’s race, ultimately finishing sixth. Matt was struggling with a slow puncture in the #3 Ligier JS P3, which eventually let go one lap till the end, dropping him from third to seventh at the chequered flag.

In race two, Christian and Tony led from the first corner and had to deal with two safety car periods. As the pit window opened, Tony stopped first to hand over to Matt. Matt resumed the race in second, while Christian stayed out as long as possible until he also stopped to hand over to Andrew, promoting Matt to the lead of the race. Matt was caught and passed by the winner of the first race, Colin Noble, but held on to take second at the end of the race. Unfortunately, Andrew spun off into the wall in the #2 Ligier JS P3, which caused a race-stopping red flag with only four minutes left to run.

The second round of the Henderson Insurance LMP3 Cup Championship will be at Brands Hatch on 20-21 May.

Christian England, #2 driver, United Autosports:
“I’ve really enjoyed the first race in the Henderson Insurance LMP3 Cup Championship and it was great to be involved in the Championship's first round. I had a couple of good stints and enjoyed being out in front. The car felt really good and I think I’m getting better in my own pace. For this weekend, I’m happy with my personal performance and it can only be a good thing to get more practice for the European series.”

Andrew Evans, #2 driver, United Autosports:
“Overall it was crazy weekend for my first race in Europe. I’ve learnt a lot, especially from Christian who was a great team mate - he taught me a lot about pit stop races, which I’ve not had a lot of experience with. Going into the first race, Christian did a great job getting us into the lead. Going out there, unfortunately I lacked the pace and ended up P6. Going into the second race we were in a good position and I held P4 for a while, until I ended up in the barrier. I think we will have a much better second race as I love driving these Ligier LMP3 cars.”

Tony Wells, #3 driver, United Autosports:
“The team was great and everyone was very welcoming and it’s a happy, supportive environment. I think I did my bit - qualifying was as good as I could get out the car and I had some great stints at the start of the race. I think there’s still a bit more to come out the car, but we had a great time.”

Matt Bell, #3 driver, United Autosports:
“We had some ups and downs this weekend. It was a shame to end yesterday’s race with a puncture. It seemed to be a slow puncture that was running through the whole race but then gave up on the last lap! Tony had a mega stint and he’s great at starting races which bodes well for the year. We will work on some set up for the next race, but a second place is not a bad start to the championship.”

Richard Dean, Team Owner and Managing Director, United Autosports:
“I think generally for the championship the weekend has gone really well. The paddock looked fantastic and everyone presented themselves really well. The racing has been great - close and fast. Here we are as ELMS champions and we have come away from here not winning a race. We’ve had a second place finish and two front row starts, and Matt had some bad luck with the slow puncture, but it just shows what a good job everyone else has done. We will do a bit more testing to get a better understanding of the Pirellis but we are looking forward to the rest of the season.”

UNITED AUTOSPORTS JOINED ON THE PODIUM BY A FAMILIAR FACE 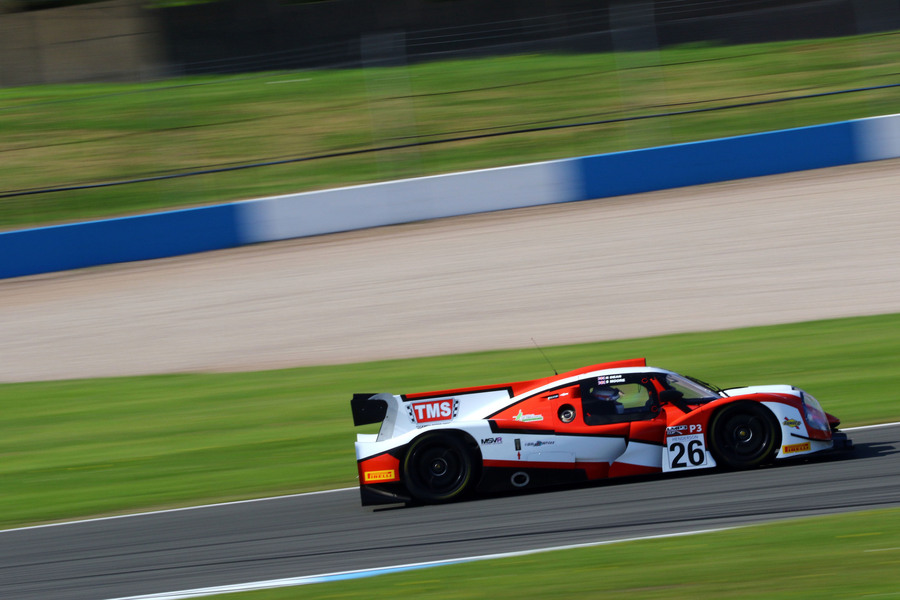 Matt Bell and Tony Wells were joined on the podium at the end of Sunday's race by a familiar face, as United Autosports Team Owner, Richard Dean finished third alongside Sarah Moore in the Tockwith Motorsports Ligier JS P3.

As the bronze graded driver, Richard qualified the car in fifth for both races. Richard moved up the grid during his stints in Saturday and Sunday’s races before handing over to Sarah at the half-way point. Sarah drove stunning stints to bring the #26 Ligier JS P3 home in sixth and third.

“I had lots of fun with Tockwith. The car was fantastic and Sarah was incredible, she’s done a really great job and I’m not just saying that because she was faster than me, but she was quicker than a lot of the other guys too. She had a slow puncture during the second race, which slowed her pace a little, but we still came away with a podium! I should retire again now - I had lots of fun.