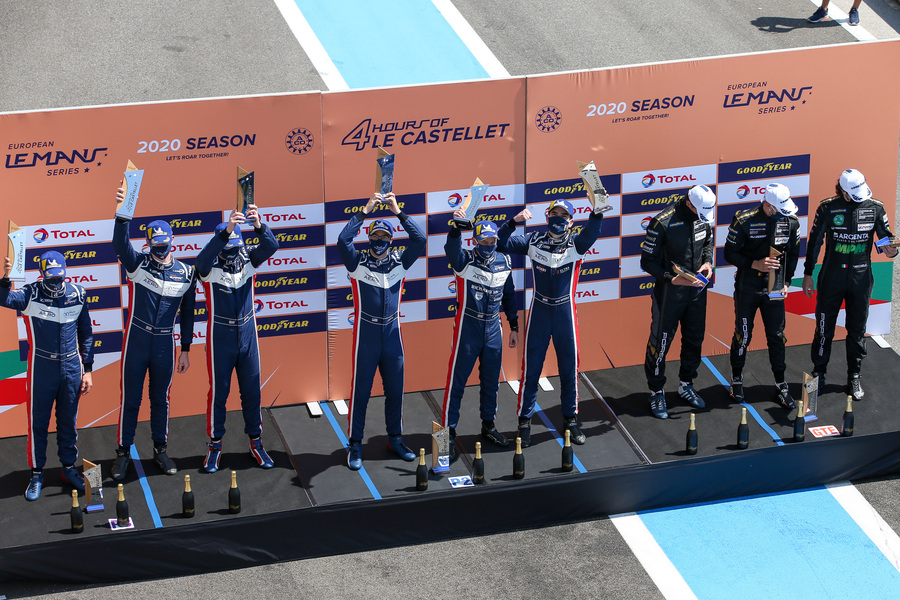 United Autosports scored two wins at Paul Ricard today as the #32 crew of Alex Brundle, Will Owen and Job van Uitert won the 4 Hours of Le Castellet, while the #2 crew of Wayne Boyd, Tom Gamble and Rob Wheldon also took home the LMP3 class win. A late puncture for the #22 Oreca of Phil Hanson and Filipe Albuquerque took them out of the lead and subsequently ruined a potential race win, while the #3 Ligier JS P320 of Jim McGuire, Andrew Bentley and Duncan Tappy had a tough opening race after an early drive through penalty. A post-race penalty for the second-place finishers ultimately promoted the #22 crew to third place at the end of the weekend.

The team now move on to the second round of the European Le Mans Series at Spa Francorchamps, Belgium on 7-9 August.

The race started at 11:00 local time, with Phil Hanson lining up on pole position after a stunning lap by Filipe Albuquerque the previous day. Will Owen started the race third on the grid and made a great start passing the second placed car after 16 minutes, making it a 1-2 for United. The pair had a great battle during the early stages of the race, with Will ultimately putting the #32 on top ahead of the opening round of pit stops.

As the race progressed, both United Oreca 07s showed fantastic pace to run in the top-three for the majority of the four-hour race. After his opening stints, Will handed the #32 over to Alex Brundle, while Phil handed the #22 over to Filipe Albuquerque, again running at the head of the field. Phil returned to the cockpit of the #22 to finish the race, but suffered a puncture with less than 30 minutes left to run, ruining a possible race win. They ultimately crossed the line fourth after a fight back towards the end of the race. Job van Uitert finished the race for the #32 team in his first race for United Autosports. He managed to pull a gap to the car in second place during his stints, bringing the #32 Oreca home to take the opening win of the year by 17 seconds.

In LMP3, Tom Gamble, in his first ELMS LMP3 race made a fantastic start from pole position and pulled out a lead ahead of the rest of the LMP3 class, which he maintained throughout his stint. Tom also scored the fastest lap of the race during his opening stint. He handed the #2 Ligier JS P320 over to Rob Wheldon with nearly an hour of the race gone. Rob drove a fantastic stint in his maiden ELMS race and his first outing with United Autosports. Handing the car over to Wayne Boyd for the final part of the race in second, Wayne began hunting down the leading LMP3 car, catching and passing him with 18 minutes of the race left to run. Wayne brought the #2 car home to take the opening LMP3 race win of the 2020 ELMS.

The #3 crew were more unlucky, after Andrew was hit with a drive through penalty for a jump start after starting from fifth on the grid. The three drivers all showed great pace, with Jim McGuire making his ELMS debut this weekend and solidly holding position throughout the middle part of the race. Duncan Tappy got on board the #3 with just under half the race left to run bringing the car home in seventh after making up positions through his stint.

“Today was a hard day for my car with a puncture at the end of the race while leading with a small margin to second place, but to come away with third and a puncture is very lucky considering the circumstances. It was a strong result for the team nevertheless, and I’m happy for the sister car on their maiden victory.”

“At the end of the day it is a big shame to lose a race in the last 30 minutes with a puncture. I think we were great the whole week and to come away with a pole and a third place is not a bad result. The team did a great job and today a 1-2 would have been possible for United and that will happen this year. Now we move onto Spa.”

“I’m proud to be part of a great day for the team. My race was quite straightforward but there was a safety car restart to handle in terms of staying ahead of our sister car and the #26 G-Drive car. Speaking of our sister car I feel for them today, they were extremely unlucky being unable to continue fighting at the front. A great, safe run from both of my team mates and a good qualifying position were the key to the victory for us.”

“Today was an absolutely great day with Alex, Job, and United! We won and had a fantastic car, great pace, and no mistakes. Across the board it was perfect execution and we are all so proud of how it ended up. It’s too bad for the #22 to have lost a tyre at the end since we looked set for a double podium, but you have to take the good luck when it comes. We worked hard to test our tyres in the Prologue to make sure they would last and that was our strength today for sure. We are now championship leaders and will stay focused to keep the momentum up."

“We had a good race but it was very stressful too, waiting to get to the end. But we managed it and to come away with a win in my first race with United is fantastic! All three of us worked really hard all weekend to get the best out the car and I feel we didn’t make any big mistakes today, which helped towards getting our win.”

“I’m absolutely delighted for everyone, particularly the boys who basically did an all-nighter to get the car ready so a massive thanks to them. We have been fast all week in testing, qualifying on pole and our race pace was strong. All three of us did a mega job. Our strategy was great too. I’m looking forward to Spa now. One of my favourite tracks. What a perfect start.”

“My first race with United was really good. We’ve been fast all weekend and we had one goal for the race. Wayne did a great job in qualifying which made my job of starting the race easier. Then in the race itself, we got off to a really good start and I managed to build a gap. We got unlucky with the safety car too, pitting before it came out. Rob had a great stint, then Wayne managed to put in a fantastic final stint to get us back into the lead and bring home the win.”

“To get this win is awesome. I’m massively thankful to Richard for giving me this opportunity and I’m also hugely grateful to the lads for working basically all night to get the car out. I’m just glad I managed to hold my end of the bargain up. I didn’t know what to expect because I’ve never done an ELMS race before but this was awesome. I’m really looking forward to Spa.”

“My first ELMS race was pretty exciting, racing amongst the LMP2s. It was a lot quicker paced than I’m used to. We had good pace throughout the race and I felt like we had a pretty good result overall so I’m really pleased.”

“My first ELMS race of the season is done. We had an interesting couple of days testing leading up to the race which meant we were on the back foot a little bit. But I think we all worked well as a team and did the best we could. I think Andrew was very unlucky at the start of the race and Jim’s stint was very solid. My stint was pretty uneventful but with the damage we had on the car I had to drive around that and I think the pace was ok, but I’m looking forward to making some improvements for Spa.”

“The first race of the new season with my new team mates showed how much potential we have. We all had solid stints and I’m already looking forward to the next one. I started and in avoiding a messy start, I got a jump start drive through which was frustrating but I was able to drive back through the pack into the same place before the penalty. The whole team have worked really hard all week and I know we’ll be back even stronger next time.”

“What an awesome start to our ELMS campaign. Our third double win in our ELMS career, which is a great way to kick off the delayed 2020 European season. Really proud of the whole team.”

“This was exactly the start to the 2020 ELMS season we wanted. The whole team has worked really hard over the winter and lockdown to get us to this position. The development work we have done has really shown this weekend and I’m proud of them all. I’m very happy for both the #32 and #2 cars, our third double win in ELMS over the course of the years. The #22 drivers were so unlucky with the puncture towards the end of the race. The #3 Ligier had an unlucky race too but they have all shown promising pace so I’m looking forward to seeing how they get on over the year. Leaving Paul Ricard leading both championships though is fantastic.”