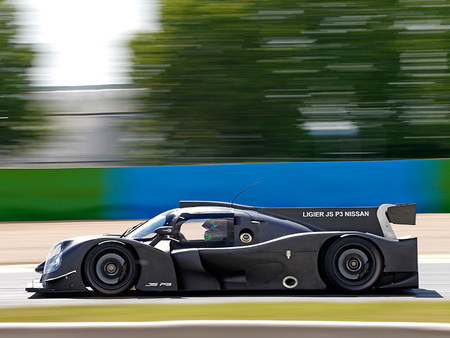 The switch from their original plans to run two Ginetta-Nissan LMP3 cars in the series comes as the team looks to concentrate on their longer term business plans.

After consultation with all parties involved in its fledgling LMP3/ELMS campaign, the team has invested in a brace of Ligier JS P3 chassis, which offers the Leeds-based team a smoother transition to ultimately graduate into the LMP2 category and eventually compete in the Le Mans 24 Hours – the Anglo American team’s ultimate aim.

Ligier has also been named as one of the chassis manufacturers eligible to supply LMP2 chassis to the new Daytona Prototype international (DPi) category from 2017 onwards, allowing the team to branch out into racing in the IMSA series in the US at world-renowned tracks such as Daytona and Sebring.

United Autosports will take delivery of their first Ligier JS P3 at the end of the year and will begin an intensive testing schedule shortly after.

United Autosports will continue to support Ginetta with their season-long involvement in the inaugural LMP3 ELMS programme, with their supply of equipment, staff and logistics support to the Ginetta factory team, Team LNT.

“The decision to switch to the Ligier JS P3 car was the best one for the team’s future plans. Our ultimate aim is to be at Le Mans, and with Ligier recently announced as one of the constructors to build the LMP2 Le Mans chassis from 2017 onwards, it made total sense to make the switch. I’m looking forward to seeing it out on track.”

“Making the move from running two Ginettas to two Ligier JS P3 cars in the European Le Mans Series was not straightforward for me, given my links with Ginetta and my friendship with the chairman, Lawrence Tomlinson. However, putting the team’s best interests first was the only way to go and Lawrence could not have been more accommodating, so now we are working towards receiving our first Ligier JS P3 car late this year and going straight into testing the car and drivers. We can now start work on our marketing plans and aim to take the team to Le Mans in the coming years. I think this is a great opportunity for the team and our drivers who want to race at the Le Mans 24 hours as they can work their way up as a natural progression from LMP3 to LMP2 with the same team.”

“It’s great to be working with Richard Dean and Zak Brown again. We already had the pleasure of teaming up with them in 2011 when United Autosports entered one of our sports prototypes in the Petit Le Mans. Not only that, they finished second in LM P2! The team’s a very professional one with rich, wide-ranging experience. We’re delighted that they’ve decided to run Ligier JS P3s in the 2016 ELMS, and we’ll do our utmost to back them up and do the best we can to meet their needs and expectations. I’d like to wish them every possible success in this new adventure that we’re going to share with them.”