United Autosports has just finished restoring the last kart Ayrton Senna is understood to have ever raced. Zak Brown purchased the 1981 DAP kart at a Bonhams Auction in January and following a six month rebuild, United’s other co-owner Richard Dean shook down the rebuilt kart last week (3 August).

The late Ayrton Senna began his competitive career driving karts. The three-time Formula 1 World Champion, one of the world’s greatest ever racing drivers, drove this particular DAP in his last outing in a kart race, finishing fourth in the 1981 World Championships staged in Parma, Italy. The kart was new for this event and prepared to the Brazilian legend’s personal preferences. Senna was already racing in single-seaters in 1981, contesting the British Formula Ford 1600 Championship but made a final return to karting in an attempt to win a title that had always eluded him.

Fittingly, Senna’s long-time sparring partner from karting and sometime DAP kart team-mate, Terry Fullerton, was in attendance to witness Dean in the ex-Senna kart at the Lydd circuit in Kent, England, last week. Briton Fullerton, the 1973 World Kart Champion, was Senna’s “factory” DAP team-mate between 1978-80. After winning the first final at the 1980 World Championships, Fullerton’s engine broke whilst leading the second final and ultimately finished third overall, behind Senna who came second overall. They were regarded by team manager Angelo Parilla as the best two drivers in the world.

At a press conference at the 1993 Australian Grand Prix, when asked which driver he had the most satisfaction racing against, Senna cited Fullerton. The quote was included in the Senna documentary in 2010. Fullerton is coaching Max Brown, Zak’s 11-year-old son. 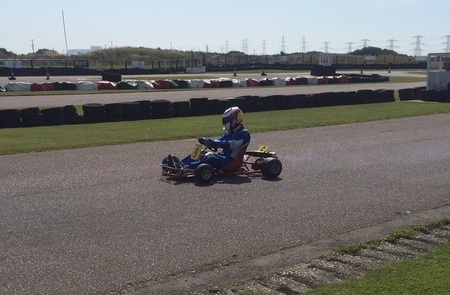 “Zak acquired the ex-Senna DAP kart at a Bonhams Auction earlier this year. The kart was built exclusively for Senna by the DAP factory in Italy but the chassis was originally designed for DAP by former World Kart Champion Terry Fullerton. We did some restoration work on the kart as it hadn’t been run for quite a time. The engine was stripped and all the brakes serviced etc. We kept the original working parts and only replaced things like seals and bearings. This really is a piece of history and it sits proudly in the reception of United Autosports’ workshop in Leeds. Zak insists all of the cars in his historic collection are in working order and can run on track at any time. All of our vehicles are in exact period condition and the Senna kart is no different.

“Senna is probably on everybody’s top three of all-time greatest drivers list. I also remember very well the time when Senna was karting in the World Championships because I was racing in the junior karting scene at that time and he was ’The Man’ everybody was tipping to get to F1. So, to get to drive Senna’s very last kart was something extremely special. Senna’s biggest rival and most feared competitor was Terry Fullerton and fittingly Terry was at Lydd when we ran the kart for the first time – he was actually my boyhood hero. Driving Ayrton’s kart was pretty emotional for me and I can’t wait to take it out again!”