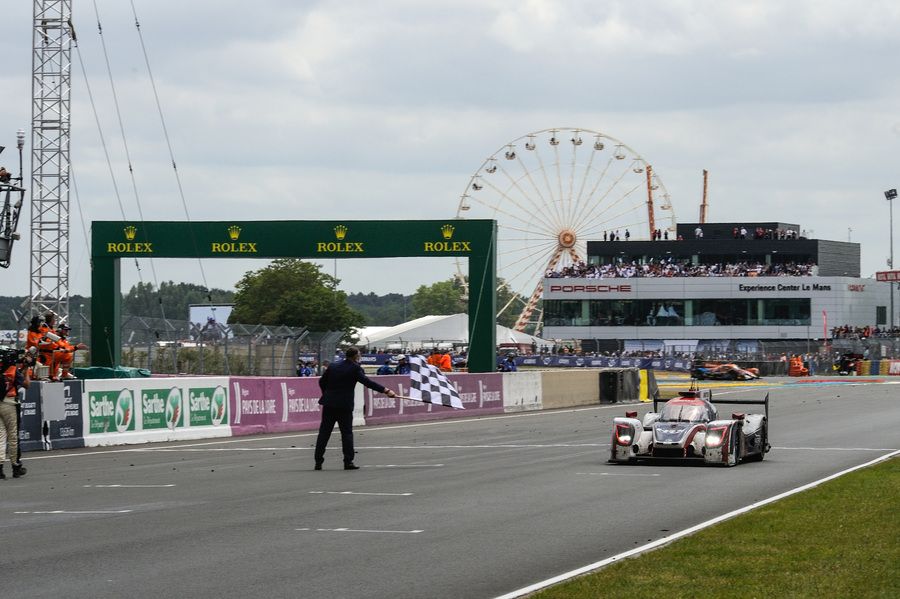 United Autosports recorded a hard-earned but well deserved fourth LMP2 class placing courtesy of Filipe Albuquerque, Paul Di Resta and Phil Hanson in the 87thrunning of the  world-famous Le Mans 24 Hour sportscar endurance race in France today (16 Jun) – claiming Ligier’s best finish for a third consecutive year. The Anglo-American team, contesting the legendary annual event for the third time having finished fourth (2017) and third (2018), had both of its Ligier JS P217s inside the top-seven at the halfway mark of this year’s twice-around-the-clock marathon.

Sixth-placed #22, which had started the race at 3pm on Saturday from that position, served a drive-through penalty shortly before 10pm for a Safety Car violation, then lost three minutes just after midnight having a door replaced after a side window came adrift. Over the final six hours, #22 was involved in a titanic, gripping battle for fourth place which it ultimately came out on top of. #32 started ninth and ran seventh when it lost 36 minutes due to an alternator change in the 13th hour then another seven minutes to replace a punctured left rear tyre and new rear body deck damaged by the flailing tyre. It lost a further 14 minutes after 10am Sunday morning when a replacement rear engine cover was difficult to fasten. United’s next FIA World Endurance Championship race will be at Silverstone (1 Sep), the opening round of the 2019-20 season which it contests in full.

Phil Hanson
“Fourth place is a little disappointing. The Ligier was reliable but just lacked outright pace. The team did a fantastic job. My first stints were good. I took over the car in P6 and gave it to Filipe in P6. The Ligier handled a bit better compared with the opening stints of Filipe and Paul. It was a shame we had a drive-through penalty with Filipe for overtaking under the Safety Car before we lost time changing the door when the glass fell out. The balance wasn’t great early this morning nevertheless we battled hard for fourth and we ultimately claimed that place after great drives from Filipe and Paul.”

Filipe Albuquerque
“My stint at the start of the race was harder than I expected. I had oversteer and the car was too neutral. But I stayed out of trouble. I had a massive lock-up through the second chicane around 4am, so needed to replace all four tyres. Ended up doing four and a half stints. Our pace was steady but not amazing but it still saw us challenging for P4 for the final six hours or so. We maximised everything that we could during each of the 24 hours.”

Paul Di Resta
“P4 is the ‘chocolate’ watch position. Everyone has worked so hard, the guys have been here for three weeks, never mind the preparation beforehand. It’s a shame to narrowly miss out on a podium – that was the ultimate goal. We lacked a bit of pace compared to the other guys. We can be satisfied with the job we’ve done with no mistakes like last year. It was hard work. The car balance proved to be quite difficult but we were always in the fight for P4-P8 for the entire race. A great event to compete in.”

Alex Brundle
“I took the start, managed to keep out of trouble and gained places, boxing P4 or P5. Driving into darkness on Saturday evening was fun. Having already changed the alternator, I had a left rear tyre failure on the way into ‘Karting’, which isn’t a pleasant feeling, at around 6am this morning. The rear snapped away and I did well to keep the car out of the wall and get back to the pits. After those issues, it was a case of just driving the car to the end. It was impossible to get too much time back. So we just made sure we kept out of trouble and got to the chequered flag. It was a tough race.”

Ryan Cullen
“My first ever race laps at Le Mans were really eye opening - nothing really prepares you for the actual race. I did a quadruple stint in the night which I was really happy with, staying consistent with no mistakes. It’s been really tough, tiring, but we had no luck. That said, I really enjoyed it and already want to come back next year!”

Will Owen
“My opening stints were okay - the car was good and had good pace. But after our problems, it’s not massive fun when you’re not in the running. It’s a case of just finishing the race and it is not necessarily the most enjoyable thing when you don’t have something to really push for and really go for to get the result. But we at least got to the chequered flag.”

Zak Brown, Team Owner and Chairman, United Autosports:
“Our drivers and all the team did their very best. We come away as best placed Ligier for the third consecutive year. We’ve now finished third and fourth twice at Le Mans which are awesome achievements. We’re doing the full 2019-20 WEC season so I’m already looking forwards to coming back here in 12 months.”

Richard Dean, Team Owner and Managing Director, United Autosports:
“Fourth is a difficult place to finish in a 24 hour race. No trophy or glory of getting our second Le Mans podium after a lot of hard work. #22 lost over a lap with the window problem and we’ve finished a lap down to third-placed TDS, a quality team with WEC as well as ELMS pedigree. On pure pace, P4 was about where we deserved to finish, I guess. I’m very proud of every single team member who has worked extremely hard in the months leading up to this unique event. #32 experienced real hard luck which is difficult for that crew to take.”