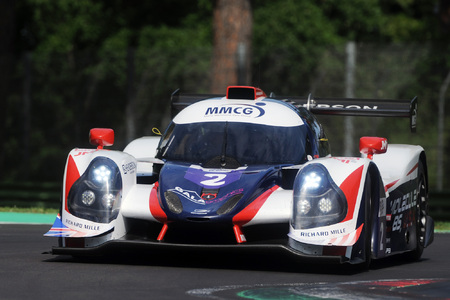 United Autosports has followed up last month’s magnificent European Le Mans Series debut victory by scoring a second consecutive championship win in Italy today (15 May). Opening Silverstone race winners Alex Brundle/Christian England/Mike Guasch swept their #2 Ligier JS P3 to a stunning 9.668-second victory in the 4 Hours of Imola, to increase the trio’s lead in the Drivers’ standings. The #3 Ligier of Matt Bell/Wayne Boyd/Mark Patterson which finished second at Silverstone, came home an unfortunate seventh in Italy to extend United Autosports’ leading margin to 13-points in the Teams’ classification – a drive through penalty robbing the #3 Ligier of a likely top-three finish.

The two United Autosports Ligiers lined-up first (#3) and third (#2) in the 20-car LMP3 field for the four-hour race around the historic 3.04-mile track under a blue sky and in warm sunshine. Boyd’s fine achievement, at only his second sports-prototype event and first qualifying attempt, earned the team its maiden ELMS pole-position – the team denied an all-United Autosports LMP3 front row when Brundle lost P2 in the dying moments of the session on Saturday afternoon.

Bell and Brundle completed the opening lap one-two, the positions reversed 12 minutes into the race when Bell ran wide when attempting to overtake a slow LMP2 car. Guasch took over the leading Ligier on 53 minutes with Patterson in for Bell one lap later, but Mark was forced to serve a drive-through penalty, Bell having entered the pit-lane too fast – dropping the #3 Ligier down to fifth.

The #2 Brundle/England/Guasch Ligier was up to second place before pitting at mid-distance for England while Patterson double-stinted in eighth – both United Autosports Ligiers stopping under Full Course Yellow conditions for a splash of fuel. With 90 minutes to run, the #2 and #3 Ligiers were placed second and seventh respectively, but England was through into the lead with 75 minutes remaining, moments before it started to rain. England and Patterson pitted for wet tyres from first and sixth positions respectively on 58 minutes, again under FCY, with Mark handing over to Boyd. The Safety Car was then deployed with 26 minutes remaining, the track now treacherously wet, the conditions dictating that racing would not re-start for safety reasons. Championship leaders Brundle/England/Guasch now have 50 points with Bell/Boyd/Patterson still second now on 25 points.

There is now a two-month break before the third round of the six-race ELMS held at the Red Bull Ring in Austria on 17 July. Between now and then, United Autosports faces a very hectic period with an involvement in the Geneva Rally (CH) (19-21 May), Monaco Grand Prix (MC) (27-29 May) and Le Mans Classic (F) (8-10 July). Additionally, Martin Brundle and Christian England compete in the “Road To Le Mans” race preceding this year’s Le Mans 24 Hours (18 June) in the #2 Ligier JS P3. Meanwhile United Autosports Team Owner Zak Brown’s ex-Michael Schumacher/Nelson Piquet/Martin Brundle 1992 Benetton B191B was sold at Bonham’s Monaco Sale ‘Les Grandes Marques’ Auction, Zak’s ex-Nigel Mansell 1990 Ferrari 641 having also been sold recently.

“The start was a lot cleaner than at Silverstone which was great for us up the front of the grid. We ran 1-2 and the car felt excellent. I was able to make a pass on Matt when he made a little error and pulled a little gap. A very clean stint for me and then I handed the Ligier over to my two team-mates who did an absolutely stellar job again. From my side, everything went reasonably smoothly but then all hell broke loose in the final stint and it was managed expertly from the pit wall and behind the wheel, so congratulations to everyone on that.”

“We did it again! Second race, second win for our car. It was a race of two halves for me. A more or less dry first stint, the car was fast and fantastic. I dealt with the traffic really well which was my number one aim. Then the heavens opened and it was just a case of survival. The organisers made the right decision running FCY then behind the Safety Car because I was aquaplaning doing 80kph!”

“I took over from Alex, got out there and put my head down and took off. It was a bit difficult because there was so much traffic with lots going on with the LMP2 cars coming up fast behind. All I had to do was make sure I was going as fast as I possibly could. We were getting low on fuel but a FCY helped us out. I would have liked to have had more racing but pitted under FCY to Christian.”

“Our car just had plain bad luck this weekend. As a driver line-up we have been good again and as a team, we were excellent, proven by the sister car’s victory. The event started to spiral away from us from when we had the puncture in practice allowing Mark limited running while I only had two laps. An LMP2 car ran me wide at turn one which cost me the lead. When I pitted, I thought I had pressed the pit speed limiter button but my finger had obviously slid off and as I accelerated back up to what I thought was the speed limit in the pit-lane but was in fact too fast. The series of Full Course Yellows and the Safety Car at the end combined to wipe out any hope we had of recovering up the order.”

“Everything was going pretty well but we had a couple of issues and the race didn’t go quite to plan for our car. Unfortunately it sometimes goes like that, but we will come back stronger for the next one. From a personal point of view claiming pole-position on Saturday was fantastic. The car was unbelievable. Roll on the Red Bull Ring where I’m sure we can put things right.”

“It was nice Wayne earned us a point [for pole], seventh place in those race conditions was satisfactory, but we should have ended up fifth if it hadn’t been for the FCYs and Safety Car. I’d like to think we’ve used up all of our bad luck for the entire season in this race but such is life. Our sister car getting a second victory is pretty cool for United Autosports.

“What another fantastic race for United Autosports! All six drivers showed great pace throughout the weekend. Congratulations to Alex, Christian and Mike – this second victory comes as a just reward to our hard-working team. It’s a shame for the drive through for the #3 car. Seventh place wasn’t a true representation of how strong that car was too as Wayne demonstrated in qualifying. Roll on the Red Bull Ring but first we have Alex’s father, Martin, and Christian out at Le Mans which will be awesome.”

“Another good weekend all round for the team. Pole position car #3, Wayne did an absolutely stunning job and just a shame he never got a chance in the race with his stint being under Full Course Yellow – a real shame as he’d given it a real good go to get back onto the podium. But that’s just how it works out sometimes. As for car #2, two wins out of two. There isn’t really a lot more you can say. Another brilliant performance by this crew.”