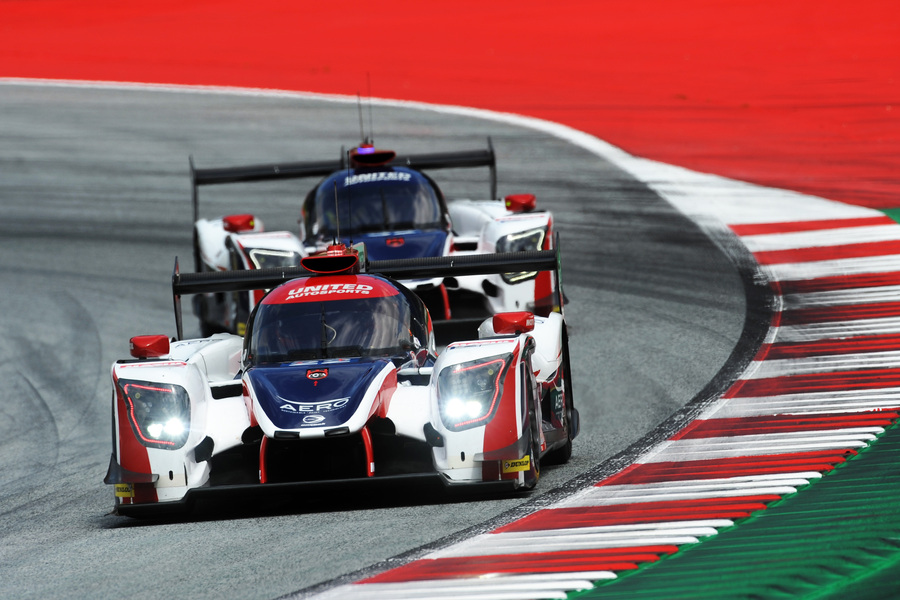 Albuquerque and Owen placed their #22 & #32 Ligiers seventh and 12th respectively in qualifying yesterday afternoon with Hanson (#22) and de Sadeleer (#32) taking today’s race start in dry but overcast conditions around the 2.68-mile track. Differing fortunes saw the #22 make up two places while the #32 dropped four in the opening lap melee. With 30 minutes gone the #22 and #32 were fourth and 14th, Owen taking over the #32 on 40 minutes, a longer stop due to a rear end change because of damage when de Sadeleer was hit, dropping to 17th and one lap down.

Hanson, having led during the first pit-stop phase, challenged for fourth after his fuel stop on 41 minutes, his #22 Ligier incurring right rear damage when lapping a GT Ferrari for a second time, dropping to eighth with 65 minutes gone with his front tyres losing their grip. Both cars took advantage of two FCYs to stop and at mid-distance the #22 and #32, now with Boyd at the wheel, lay sixth and 16th respectively, Boyd surviving a spin and scraping the barrier after contact. Hanson, fifth with 90 minutes remaining, handed the #22 to Albuquerque 20 minutes later. De Sadeleer took over from Boyd in the 15th placed #32 with 50 minutes left, the team gambling on cut slicks, while the #22 made its final stop, for fuel and right-hand side tyres only, with 20 minutes to go, Albuquerque resuming fifth. Filipe took the chequered flag fourth and the highest-placed Ligier, de Sadeleer crossing the line 16th having set his car’s fastest lap in the closing stages.

Rayhall #2 and Grist #3 began the race placed eighth and 10th on the LMP3 grid courtesy of Sean and Bell the previous afternoon with both cars making up places at the start, the #2 and #3 running fourth and seventh on 30 minutes. #2 remained fourth after its fuel stop while Bell, now in the #3, lay eighth. The #2 was second on 80 minutes, 35 seconds down on the class leader, with Bell sixth on 90 minutes. Approaching mid-distance, under a FCY, Falb (#2) and Wells (#3) took over the second and fifth placed Ligiers before the #2 suddenly stopped on track with an engine issue. “Gentleman driver” Wells unsurprisingly lost places to higher-graded professional drivers and survived contact and a spin with 90 minutes remaining running eighth but had commendably moved up to fifth before making his final stop. But with 37 minutes to run, Tony spun and contacted the barrier, stopping for minor right rear bodywork repairs, dropping to 12th – a position he took at the chequered flag.

Phil Hanson
“I had a very, very long stint lasting almost three hours. I immediately made up a couple of places on the opening lap. I then had contact which was no fault of my own but which damaged the rear of the car. United is doing a great job, as are Filipe and I, but we can’t seem to get any luck. I’ve got my fingers firmly crossed that we can turn things around for Silverstone.”

“I was pretty happy with qualifying despite suffering too much understeer but knew we had a better car for the race in terms of better balance. It wasn’t an ultra-fast car but it was comfortable to drive today. P4, considering the competition and what happened to Phil earlier in the race with the contacts, is a solid result. We’re pretty close to a podium finish and hopefully we can get this at Silverstone.”

Will Owen
“I was happy to have my first-ever ELMS qualifying session here. Qually runs have always been the biggest challenge for me but the United Ligier was great. I took over from Hugo after 40 minutes in today’s race but we were already in damage control mode by that stage after Hugo had been hit and we needed a new rear end. For my stint, the car was awesome but I later flat-spotted my front right.”

Hugo de Sadeleer
“My start wasn’t great partly because the car in front was slow away at the green light. I then found myself boxed in and had to back out costing me places. I was stuck in traffic and was rear-ended which was very disappointing – there is no need for that kind of driving. We had very good race pace but suffered from our start position.”

Wayne Boyd
“I didn’t get off to the best of starts when I took over from Will. I was trying to overtake another LMP2 car, he edged me over onto the grass, causing me to spin and I hit the barrier. Maybe I was a little ambitious. That damaged the front end and afterwards I struggled with understeer. We changed the nose at my next stop and the car’s pace was pretty good.”

John Falb
“Sean got into second and we were looking good with the race coming to us. I got in the car and left the box then a big shot of water came out of the car before pit exit. We were under FCY for a couple laps but after it went green, I could tell I was down on power. Then after a full lap, the engine let go.”

Sean Rayhall
“Qualifying was tough but we knew that our car would be better for the race. The United guys worked really hard this weekend and we’d worked our way into second only to get the engine problem. I’m gutted for the team as I believe we had a great chance of a win today but sometimes racing goes this way.”

Matt Bell
“We seemed to struggle for pace all weekend – it’s been the most difficult event of the year for me. I was disappointed with qualifying having experimented with a set-up change that we ultimately found was the wrong direction. I took over the Ligier from Garett and found it difficult to drive. We’ll go away, do our homework, and come back stronger for Silverstone.”

Tony Wells
“It was definitely hard work out there today. I was hit in to a spin by a lapped car I’d just overtaken and it went downhill from that point with a spin late on.”

Garett Grist
“I took the start of the race for the first time this year. Having initially got bottled up, Sean and I made up places. I was happy to make some good overtakes. The balance of the car wasn’t the best.”

“It’s good to be heading to our home race at Silverstone having achieved our best LMP2 result of the season. Phil made up places well at the start in the #22, held pace well but his car’s balance was badly affected when he was hit by a GT car. It was always going to be difficult for the #32 after qualifying. Hugo then found himself boxed in at the start, was hit several times during his opening stints, causing damage which meant we lost loads of time putting on a new tail. We could have won LMP3 today, two podiums at the very least, so I’m dejected about the outcome. An engine let go which is rare while Tony suffered contacts and a spin or two.”

“It’s good to get a top-four in LMP2 but in general we just can’t seem to get a break this season. Contact damage with both of our P2 cars cost us dearly while a we could have scored a P3 podium double. On to Silverstone where hopefully we’ll get some luck.”