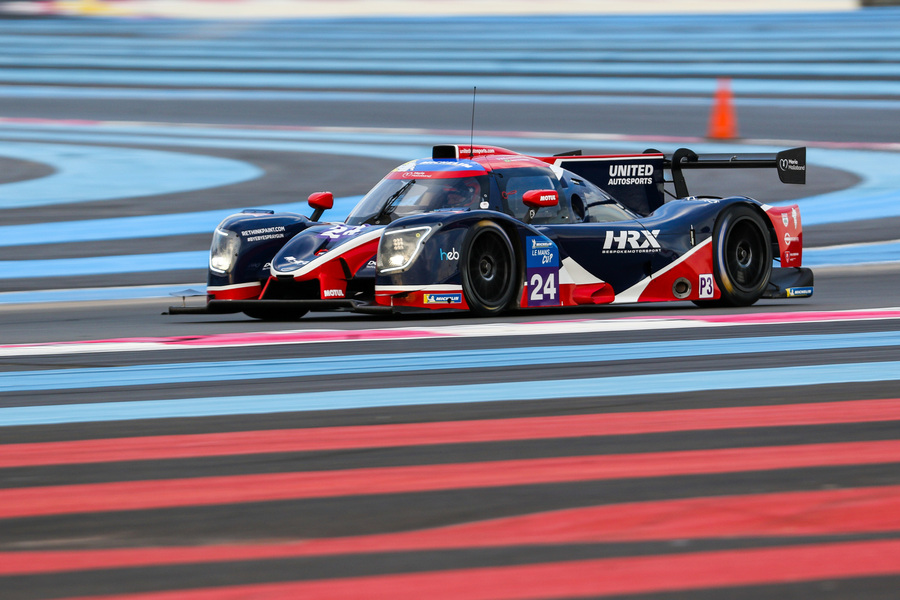 The third Le Mans Cup race of the 2020 season began on Saturday afternoon, with a wet track causing discussions about which tyres to begin the race on. Ultimately both cars started on slick tyres and ran a trouble free first quarter of the race, with John making up five places from his starting position. Daniel unfortunately dropped from sixth to ninth until the rain began to fall again and both cars pitted for wet tyres.

With almost 50 minutes gone, a full course yellow was thrown. Daniel, running fifth for the second half of his stint, pitted after completing his mandatory driving time and handed the car over to Andy Meyrick, the rain still falling heavily. John pitted shortly after and handed the car over the Wayne Boyd, who had to then come back in to the pits to serve a drive through after John made contact with another car earlier in the race.

Andy, now in fourth, began chasing down the top three, with the weather conditions failing to improve and only getting worse. Wayne was running P13 for the majority of his stint, fighting back through GT traffic and backmarkers. Unfortunately, with 20 minutes to go, Andy had a small spin on the back straight, but recovered and continued with the race, but had dropped to fifth.

With 11 minutes remaining, Wayne pitted to serve his second mandatory pit stop and re-joined in 12th, while Andy was running third until he too had to pit to serve his second stop. The conditions on track began to get worse, with cars spinning, including another spin for the #24. At the end of the race, Wayne crossed the line 10thwith Andy finishing fourth. A post-race decision by the stewards moved both cars up one spot on the final classifications.

The next round of the Michelin Le Mans Cup, the Road to Le Mans, will be held at Le Mans, France on 17-19 September.

“They were some tricky conditions at Paul Ricard – I don’t have that much experience in the rain and we started on slicks when it was nice and dry for the first part and then it started to rain. I was doing ok and I made up a few places, partly because I qualified poorly I ended up back where I didn’t think I necessarily belonged, so I passed those drivers that I knew I should have been able to pass. What made me really happy was that when it did start to rain I made up about 10 seconds on the guy ahead of me and passed him. But then it got a little sketchy and I had a spin and then watched all the guys I’d passed go by me so I lost all of that hard work which was unfortunate. Then I had an incident with car #7. I thought he was letting me by because I was faster than him but he turned in and I bumped him, which I feel bad for, it was my fault so we got a drive through. But otherwise I was happy with my stint. Then Wayne the superstar got in and took off. He was, for a while, the fastest car on track. I’m so blessed with such a good partner I’m really happy about that.”

“It was a tough race for us, but on a positive note our pace was great, for both John and I. Our drive through penalty put us out of contention for a strong result but we fought back and given how bad the conditions were, I thought it was a good recovery. We will move onto Le Mans next and hopefully get a better result.”

“I enjoyed the race. Now I’m starting to understand the car and I’m enjoying it. The tricky part was my first experience of this car in wet conditions. It was a little scary at times but the car is really stable so it gave me a lot of confidence. Of course I didn’t have Andy’s conditions which were worse. I am looking forward to the last three races. I’ve never raced at Le Mans but I’m excited because it’s Le Mans.”

“We had a good race. Our strongest result so far so I’m delighted to get that in very difficult conditions and hopefully we can build on that and have a strong preparation and go to Le Mans full of confidence.”

“The conditions for the race were terrible for the Le Mans Cup guys, but they all handled it really well. Great result for Daniel and Andy, while John and Wayne were unfortunate. Onto Le Mans next for them – I can’t wait to see how they get on.”

“I’m pleased for Daniel and Andy getting their best result of the year so far, after a DNF at Spa, hopefully it will boost their confidence going into Le Mans. John and Wayne were unlucky with the drive though, but they will bounce back at Le Mans I’m sure.”