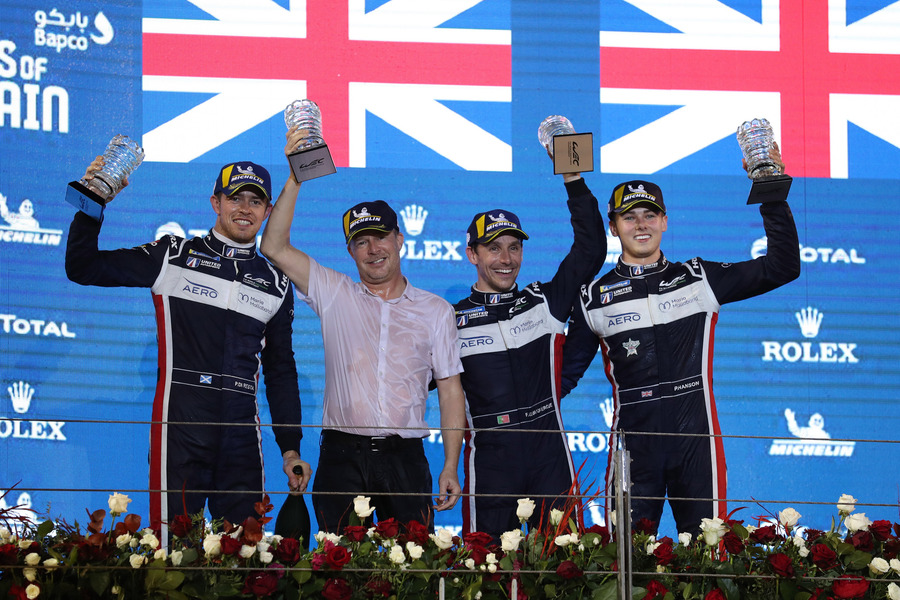 United Autosports claimed its most prestigious victory in its 10 year racing history when Phil Hanson, Filipe Albuquerque and Paul Di Resta spectacularly won the 8 Hours of Bahrain today (14 Dec). Contesting only its seventh race with the Oreca chassis and fourth as a full FIA World Endurance Championship entrant, the British team recorded its maiden WEC class victory in utter dominant style with a faultless performance. United had previously scored six European or Asian Le Mans Series LMP2 race wins plus 11 other podiums – last year’s Le Mans 24 Hours, Fuji and Shanghai WEC races and eight in the European or Asian Le Mans Series since its LMP2 category début in Europe in 2017. United now lie second in the LMP2 FIA World Endurance Team’s Trophy, three-points off the lead, with round five of the WEC being staged at the Circuit of The Americas in Texas on 23 February.

Di Resta and Hanson combined to earn United its maiden WEC pole on Friday, the Scot taking advantage of a first corner melee at the start of the race to run second overall in the opening laps, only dropping from the outright top-three with 18 minutes gone – an astonishing feat. After 84 minutes, Di Resta handed over to Hanson 29 seconds ahead, the young British rising sportscar star putting in a solid, consistent error-free two stints to extend the lead to 52 seconds. Albuquerque continued the Michelin-shod #22 Oreca’s meteoric pace, setting sub 1m50s lap times to maintain their healthy advantage.

Hanson and Di Resta impressively cycled through, both meticulously managing the very high tyre degradation around the 3.36-mile Bahrain International Circuit which compromised their lead along with losing time with a sticking front wheel nut at an earlier pit-stop. Albuquerque took over driver duties with 83 minutes remaining, armed with a new set of rubber, the Portuguese was immediately under the 1m50s lap time. With a lead of 32 seconds with 60 minutes remaining, Filipe then set about matching the lap times of his chasing pursuers to save fuel. United’s #22 Oreca ultimately took the chequered flag 21.5 seconds ahead of the second-placed LMP2 finisher, an amazing fourth overall – Hanson, Albuquerque and Di Resta, the latter setting the fastest LMP2 lap time in both qualifying and the race, each excelling on-track with the team’s engineers executing a perfect race strategy from the pit-box.

Phil Hanson
“It’s great to finally get our first WEC win and hopefully it won’t be our last this season! I did a pretty good job of managing tyre deg in my stints which was always going to be necessary. I was out against Anthony Davidson at one time and I used him as a reference for my lap times. I only had one new set of tyres so overall I’m really, really happy with the job I’ve done this weekend – especially during the race. We’re now very much back on track in terms of the championship.”

Filipe Albuquerque
“It’s been a perfect weekend for us and a dream result. Pole, race win and fastest lap. We were maybe a little more tense than normal having been unlucky in the previous races. We had great race strategy from the garage in saving fuel and tyres. The closing stages were fun racing my fellow Portuguese and good friend, Antonio [Da Costa]. This puts us right back in championship title contention.”

“It was a textbook race for us. The start was chaotic but I managed to steer clear of everything although a Toyota, re-joining the track quite sharply, caught the right rear of our car. I managed to extend our lead but always had to keep an eye on tyre management which was the key to this race. It’s very nice to get this victory and end the year on a high having previously been on the cusp of doing it in other races. There’s everything to fight for now in terms of the title.”

Zak Brown, Team Owner and Chairman, United Autosports:
“An awesome result for United Autosports and I’m very proud of everyone connected with the team! We comfortably led the first half of the race, the second half appeared tight at times but our engineers had it all in hand with a superb strategy. All three drivers performed magnificently as did the entire team. Lots of credit goes to Richard [Dean] for building this team. ”

Richard Dean, Team Owner and Managing Director, United Autosports:
“We’ve been dominant all weekend and there was no luck involved in our first WEC victory. The Oreca’s pace, our drivers, the entire team, were just incredible and after suffering some bad luck in earlier rounds, this is fully deserved and overdue for us. We’re pretty early in developing the Oreca but this dominant result, and the pace we’ve shown in the other races, shows just what exceptional engineering staff we have. There was nothing between our three drivers, all of them drove superbly, while there wasn’t a wrong call throughout the eight hours from the garage. I’m delighted for everyone, especially Dick Hanson.”