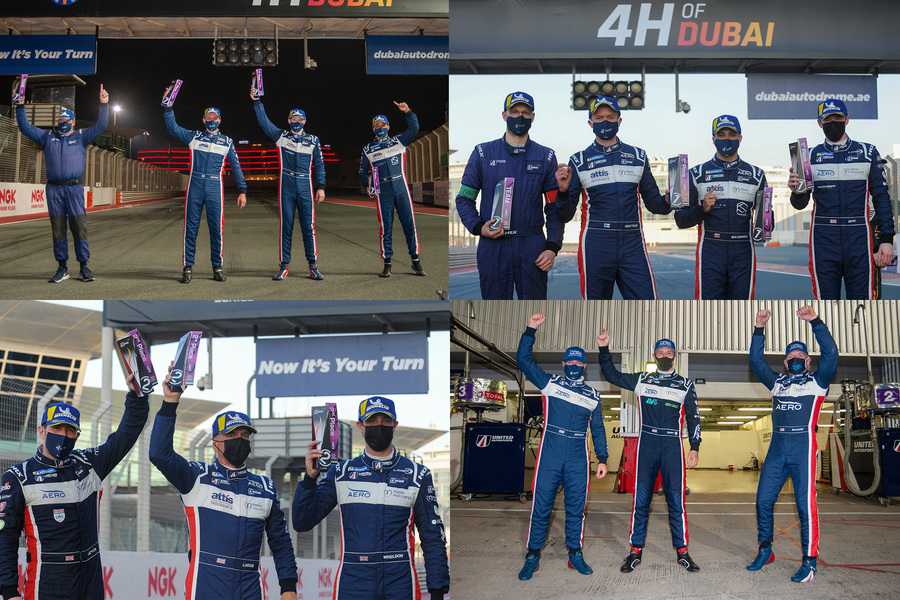 The #23 Ligier JS P320 driven by Manuel Maldonado, Wayne Boyd and Rory Penttinen won both race one on Saturday afternoon and race two on Sunday afternoon. The same Ligier started both races from pole position courtesy of two quick laps from Wayne Boyd during qualifying on Friday morning.

The #2 Ligier JS P320 of Ian Loggie, Andy Meyrick and Rob Wheldon finished race two in second place, after a great battle through the field by all three drivers from a starting positon of seventh place. They finished race one in fourth place after an opening lap puncture dropped them to the back of the 36-car pack and a lap down.

The #3 AERO Ligier JS P320 driven by Jim McGuire, Duncan Tappy and Andrew Bentley crossed the line in third for race one and fifth for race two. The #3 Ligier started both races from the front row of the grid, scoring a front row lock out for United Autosports thanks to Duncan Tappy’s qualifying efforts on Friday morning.

“I’m delighted with the results for the team last weekend. Everyone has worked so hard to make this event happen under the current circumstances and I’m pleased they were rewarded with such a successful weekend. Roll on Abu Dhabi.”

“To leave the opening weekend first, second and third in the championship is fantastic and a great reward for all the hard work the team has put in to this event. All nine drivers drove faultlessly over the last few days. The poles and front row lock outs set us up nicely. Rory and Andrew were able to pull away at the start of the races, Jim drove brilliantly, handing the car over to Duncan, and the same with Ian, who in his first race in an LMP3 car, was unlucky with the puncture in race one, but he, Rob and Andy managed to recover to take fourth and then yesterday’s second place was where they deserved to be. Manuel was also entering his first LMP3 race so to win both of them was a great result for him heading into the second half of the series. I’m looking forward to Abu Dhabi now. It is a track we love so fingers crossed we can get some more good results."

“It was great to compete in my first LMP3 race. Unfortunately, I had light contact at the start of race one and had a puncture, which put us a lap down. However, the fight back to fourth place and our second place finish in race two, demonstrates that we have good pace – watch this space.”

“A fantastic result for the whole team across all three cars. From our side, to fight back from the incident on lap one shows how strong a line up we have and I’m really looking forward to United Autosports challenging for more race wins. We had a fantastic result in race two for the #2 car and for the team to get another double podium. I’m really proud of Ian and Rob who drove amazingly all weekend. I’m looking forward to going to Abu Dhabi next weekend and building on such strong results.”

“It was great to build on our race one result yesterday and it was a real team effort to secure second place. A 1-2 for United Autosports is an awesome result and we will be looking to go one better at Yas Marina. I think we had a reasonable comeback in race one because if you’d asked us after the first lap, we would definitely have taken fourth place. I think we have shown we have all the tools to be competitive and fight for more podiums at the very least.”

“What an amazing, mega result in race one. It was great to get on the podium in Dubai. Andrew and Duncan both had great stints and we all worked together as a team to see it happen. United really worked hard to give us a great car. I was really pleased with a fifth place finish in race two as well as we had a lot of understeer, which we were fighting the entire race, so to come away with a top five finish is testament to how well the team worked. I’m looking forward to race number three in Abu Dhabi.”

“A really good start to the year. We are using this as a bit of a test programme heading into the ELMS later in the year and it’s great for us to try and improve on everything we learnt last year. We seem to be on top of our niggles from last year and we have made a good step forward. In race two, it didn’t quite fall as well as it did in race one, but Andrew and Jim both had solid stints. We just couldn’t quite get the result we wanted, but we have still come away with some good championship points and we have proved that we are a force to be reckoned with. In Abu Dhabi we should be strong.”

“What an awesome result in race one for car three. Myself and Rory pulled out a pretty good gap and it was just about being consistent, which worked well. I handed the car over to Jim who I think probably did one of his best stints to date and brought it back in a good position to be fighting for the podium we came home with. We had a really strong race two as well. It was a great effort by all the team. The car was great and the strategy was good and the pit stops were faultless. Jim did a great job putting some strong laps together and then Duncan had the last two hours, but by that point the race had settled in and unfortunately, he couldn’t make any further progress and it was just the way it fell. A strong result for the team though and I’m looking forward to Abu Dhabi. We are looking at shaking things up a bit at Yas Marina, as we are using the series as a bit of a test session ahead of the ELMS season so we are going to try a few things, but we will be aiming to be on that podium once again.”

“I couldn’t be happier. The team has done an amazing job. Rory’s double stint at the start of race one was tough for him, but he did brilliantly. I jumped in for the second stint and felt like I was right on the pace before Wayne got in and brought it home. Another amazing job from the team in race two. It got a bit chaotic during my stint as people around us were all on different strategies, but I just kept my head down and did what was asked of me. Rory and Wayne both did a great job too. I have to congratulate the team on this amazing weekend. My first ever with the team and to come out with two wins, I don’t think this happens very often so I’m over the moon and I hope to continue these results over the next weekend in Abu Dhabi.”

“What a fantastic start to the season for us. It couldn’t have gone much better with a double pole and two wins. The first race was perfect for us. Rory did a fantastic double stint and Manuel’s stint was impressive too, making my life easy for the final stint. It was just about looking after the car and bringing it home. A fantastic job from all the United guys to give us a fantastic car with fantastic pace. To win the second race ended the weekend well. We now have a good championship lead heading into the final two races in Abu Dhabi. The only issue we had in the second race was one car being out of sequence but once the pit stops played out, we were able to win again by quite a big margin. Thanks again to the United guys for giving us such a good car.”

“A really fantastic car and a really good race – thank you to United Autosports. Wayne did a good job taking a double pole. I had good pace from the beginning and I kept my head down and did the work. I took it easy as I didn’t want to ruin the tyres as I was doing a double stint. Awesome car and an awesome result. For the second race the team tried some different strategies and we came away with another win. Thank you to United Autosports for a really, really good car. We just have to do the same again in Abu Dhabi and we will come away with the championship. I can’t thank the team enough.”