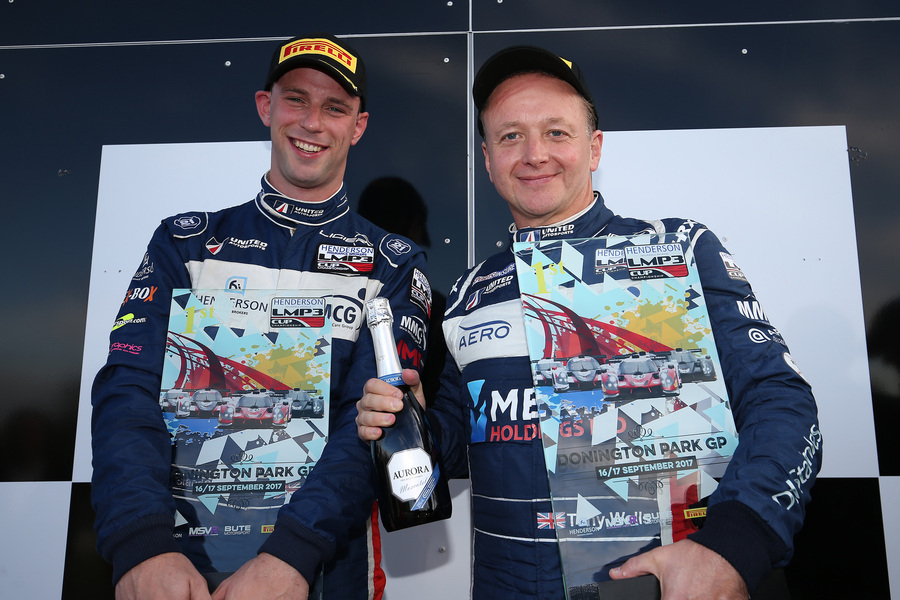 Tony Wells and Matt Bell won the opening race of the championship finale after Tony qualified the #3 Ligier JS P3 in third place. Tony, as usual, made a great start making up a place to take second and held position until the pit stops. Matt then took over and brought the Ligier home for their fourth win of the season. They also finished second in a very wet race two, marking their ninth trip to the podium this year.

Christian England placed the #2 Ligier JS P3 on pole position for both races after two great qualifying sessions on Saturday and Sunday. In race one, he held the lead on the start and handed the car over to team mate, Andrew Evans in first place. Ultimately, Andrew was caught by the faster, more experienced silver drivers in the field and finished race one in fifth. Christian took the start of race two in very wet conditions, but slipped back to second as team mate, Chris Hoy passed him on the first corner. Christian pitted the car at the half way point and handed over to Andrew for his final stint. Unfortunately, the race was red flagged early, leaving Andrew to bring the car home in fourth place.

The Red River Sport duo of Johnny Mowlem and Bon Grimes joined the team for the final outing of the 2017 season. It was the first time both drivers had raced the Ligier JS P3. As the bronze driver, Bon qualified the car and started both races. After his stints, Bon pitted to hand the Ligier over to Johnny, who finished eighth in race one and seventh in a drenched race two.

Our Sports Insure Celebrity Car pairing of Sir Chris Hoy and Sandy Mitchell were behind the wheel of the #32 Ligier JS P3 – the first time Chris had raced a Ligier, the first time Sandy had raced a prototype and first time they have worked together and with the team. Sandy was the lucky winner of the Sports Insure Young Driver initiative, where 118 young drivers entered to win the chance to race in the final round of the Henderson Insurance LMP3 Cup Championship. Sandy was then voted for by the public out of ten finalists to ultimately win the drive alongside Chris Hoy. The pair started the weekend well in testing and got stronger as the weekend progressed. Chris qualified the car sixth for race one and made a great start as the lights went green. He handed the car over to Sandy in fifth, who fought his way through the field effortlessly to finish second in his debut LMP3 race. In race two, Chris made a great start from the front row of the grid, overtaking team mate, Christian England out of the first corner to take the lead of the race. Unfortunately, Chris had a spin in the wet conditions and dropped to last. He recovered well though to hand the car over to Sandy in sixth as the pit window opened. Sandy then set about catching the leaders, making it up to fifth until a red flag was thrown ending the race prematurely and denying Sandy the chance to gain further places.

At the end of a very competitive debut season for the Henderson Insurance LMP3 Cup Championship, Matt Bell and Tony Wells finish second in the overall championship standings, with Christian England and Andrew Evans finishing fourth.

The team will now continue with their European Le Mans Series and Michelin Le Mans Cup programmes as they head to Spa Francorchamps this weekend for the fifth round of the season.

“I enjoyed the final race weekend in the Henderson Insurance LMP3 Cup Championship. I was pleased with my qualifying performance getting two poles. Unfortunately the weather didn’t go in our favour for the second race but we kept it on the track and it was enjoyable. I finished the year with a smile on my face so that’s all you can hope for.”

“It was a crazy weekend of mixed weather. Christian had two pole positions, which was great. It was unfortunate that the championship had to end under a red flag, but overall we had a good weekend. I can’t thank United Autosports and the whole crew for a great year. It was wonderful to come over to race in the UK.”

“I had a lovely weekend at Donington. The car was fantastic and we won on Saturday, which was great. I was up for the race on Sunday and it’s a shame the weather had to ruin it. I was up for getting pole but that’s just the way it goes. A first and a second is something you can’t really complain about. The championship has been great and so have United Autosports. It’s been competitive and the tracks are fab so it’s all been really good fun.”

“We had a brilliant result on Saturday. Tony did a great job in qualifying and his race stint. I managed to work my way into P1 and managed to bring it home for a win. It’s always nice to come to the final race weekend and finish it on a high. The second race was a bit of a lottery – none of us have raced on the wets this year. Tony had a great start and he usually doesn’t drop back like that so I knew there were issues. When I got in it was a case of survival and I was thankful for the red flags coming out. It think it’s been a great year. There has been some very high level racing and competition. Both teams battling for the championship in this series are also battling in championships across Europe at the top level of LMP3 racing so I think that shows the level here.”

“I’ve had a great weekend. It’s a big step up for me and I’m working my way up the ladder, which is what I want. I don’t want to just go out and collect pots – I want a challenge and something I can work towards so from that point of view it was really good. I’ve got a lot to learn with regards driving the car and that will only come with time in the seat. I think we had all kinds of conditions this weekend so I’ve had plenty of experience. It was very interesting at the start – the spray was incredible. I was pleased I messed up my qualifying and started near the back so I could stay out of any tricky situations. We had a plan to just bring the car home safely. I took it easy and tried to get a feel of the car and built up gradually. We’ve got a lot of work to do in the car but United Autosports have been fantastic – Gary, our engineer and Mark our number one and the rest of the boys have been really great.”

“Our first race weekend in the Henderson Insurance LMP3 Cup was definitely eventful. Bon did a really great job getting used to it. We were hopping between the GT Ferrari and the Ligier, which is never simple. I really enjoyed it though. The car is a great car, but has it’s little things that you need to work out as a driver so we need more time in the car really. The times in the dry were coming down and Bon was very impressive. Sunday’s race was just damage limitation and I was doing a lot of aquaplaning. Overall though, United Autosports took such good care of Bon and I. Gary and the mechanics were awesome and I’ve loved it.”

“On the whole it was a fantastic weekend and I’m so grateful I had this opportunity. It was great to meet Sandy. I’ll be watching his career in the future and it will be nice to say I raced with him when he’s a big superstar in the future. To get on the podium was something we really didn’t expect. While I’m disappointed with race two, to get a second place in race one and to start on the front row in race two was great and I had a really good time. Thanks to everyone!”

“I’ve had a great weekend. It has been a very steep learning curve from day one and especially with the changing conditions on Sunday, I’ve loved every minute of it. It’s been great working with Chris and United Autosports. They have really helped me get up to speed and going through data with me, which is really helpful. A massive thanks to Sports Insure for backing the initiative in the first place. I’ve learnt so much and enjoyed every second of it. Getting on the podium on Saturday was the icing on the cake and to finish race two was an achievement in itself as it was so wet out there.”

“We had a good final weekend in the Henderson Insurance LMP3 Cup Championship. A win and second place for Matt and Tony is a great way to end their championship. They have been in the fight for the title all year but have had some back luck to go with it. I’m thrilled for Sandy and Chris getting a podium in their first race. It’s a shame that the weather ended the race on Sunday early as Sandy could have made up some more positions I’m sure. Christian and Andrew had a tough weekend, but two poles is great for them and we were all pleased to welcome Johnny and Bon to the team in their Ligier JS P3. The championship has been highly competitive all year and we are pleased to have been battling for wins and podiums all year. Next stop Spa for ELMS and Michelin Le Mans Cup.”