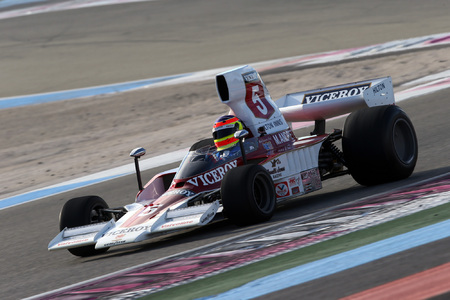 Brown and fellow United Autosports co-owner Richard Dean, will share the driving of the ex-Andretti Vel’s Parnelli Jones Racing Lola at the two events. The Anglo-American team enter a further five, cherished race cars in the annual historic event that was first established as the Monterey Historic Automobile Races at Laguna Seca in 1974.

Created in 2009, United Autosports is best known for contesting GT races worldwide. But UA also restores, renovates and race prepares historic road and race cars from its impressive raceshop in Leeds, England. Brown, founder of Just Marketing International (JMI) and currently Group CEO of CSM Sport & Entertainment that acquired JMI in 2013, continues his passion for motorsport and is a keen collector of road and racecars.

Brown and Englishman Dean, a race winner himself in Formulae Ford, Three and 3000, share driving duties of the Lola that in the hands of Andretti, won seven SCCA/USAC Formula 5000 Championship races. Having claimed third place at Monterey in 1974, Mario swept the British-built Lola to race victory from pole-position the following year.

London-based Zak and Richard also split duties for the ex-Dyson Racing 1986 Porsche 962. Stefan Johansson won at Monterey in this car in 2012 while Brown, who has been attending the Reunion since 1990 and driving in the event for the past five years, took the 962 to victory himself in 2013. Price Cobb (USA), Rob Dyson (USA) and James Weaver (GB) raced the 962 in the IMSA Camel GT Championship between 1986-88, the Porsche winning on its race debut in the Six Hours of Riverside in ’86 while Cobb claimed third place in the Monterey Triple Crown Camel Grand Prix at Laguna the same year. Another project lovingly restored by UA and at Monterey for a second consecutive year is the Scott Pruett 1986 IMSA GTO Championship winning 1985 Roush Protofab that was raced in both Ford Capri and Ford Mustang guise. Pruett took this car to victory at Laguna in 1986. 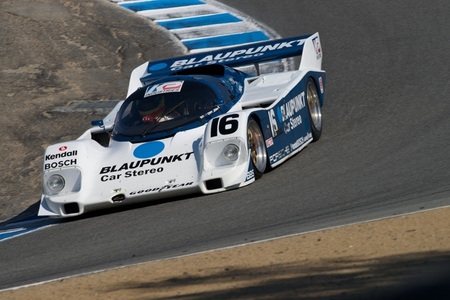 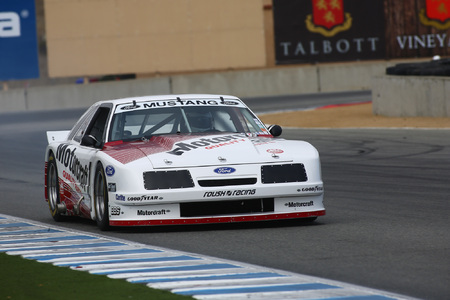 Making their respective debuts at Monterey around the 11-turn, 2.238-mile Mazda Raceway Laguna Seca, a jewel of a road course on California’s beautiful central coast, is a pair of fabulous Formula One machines. Connecticut-born Robert “Rob” Kauffman races his 1977 McLaren M26 Cosworth DFV tended by United Autosports. James Hunt (GB), Patrick Tambay (F) and Jochen Mass (D) each raced the 1977 Japanese GP winning McLaren over the 1977-78 seasons, the German retiring from the ’77 U.S. Grand Prix at Watkins Glen. Meanwhile Brown himself will be aboard his 1980 Williams FW07B Cosworth DFV, an ex-Alan Jones (AUS) chassis that did not contest a Grand Prix in North America. However, in the eight GPs the Patrick Head designed car raced in, it won four (Spain [non-championship], France, Britain and Australia) and helped Jones claim the 1980 F1 World Championship – the first World Championship for Williams. 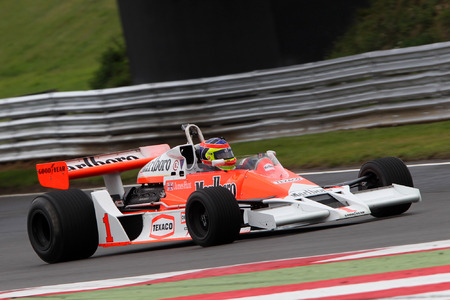 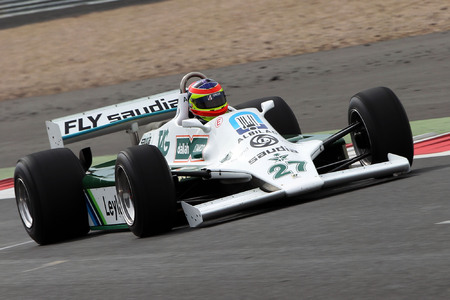 Finally, United Autosports’ mouth-watering “quintet” is completed by a 1981 Porsche 935. “JLP-3” is regarded by many as the most successful 935. Not only is it the only car ever to win both the Daytona 24 and Sebring 12 Hour races in the same year (1982), the Porsche scored five consecutive race wins and 16 podium finishes in 26 races. Raced by John Paul Sr. and his son John Paul Jr., the 935 won the 1982 IMSA Camel GT Championship. 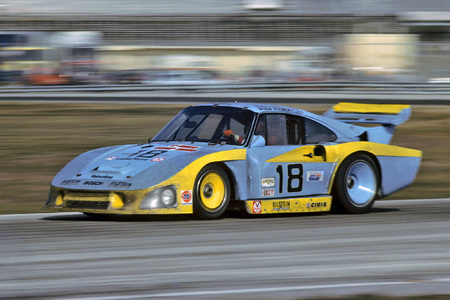 “The Monterey event is one of the biggest in the world on the historic calendar. Not only is the event spectacular in terms of the incredible collection of cars that the organisers bring together but the event is staged in a beautiful part of the world and on a stunning racetrack. I first went along in 1990 and fell in love with the event. I always thoroughly enjoy the event but I’ll be especially proud this year taking back the Andretti F5000 Lola to Laguna on the car’s 40th anniversary.”

“The Lola T332 will fittingly have its first race on the 40th anniversary of Mario Andretti’s race win at Laguna Seca following a full and detailed renovation at our workshops. The Williams FW07B similarly had a comprehensive restoration concerning the chassis, engine and gearbox. Neither car was from a ‘high tech’ era so we didn’t encounter anything we couldn’t work out ourselves. We got help and advice from Williams Heritage with access to drawings which helped speed up the process when remanufacturing new replacement parts. Zak raced the McLaren M26 at Monaco last year.

“My first time at Laguna was in 1991. I went as a guest of my Formula 3000 sponsors, Texaco, to watch the Indy Car World Series race. I went to stay with Zak in Los Angeles and we drove to the track together. Looking back at the race, Mario finished third, his son Michael winning, while Eddie Cheever and Arie Luyendyk, who both subsequently raced for UA, finished sixth and eighth. My first time at the Monterey Reunion was last year when we ran some cars and I loved it. It’s a great venue in a beautiful setting with amazing cars with so many car related events going on during the two weekends and in between.”