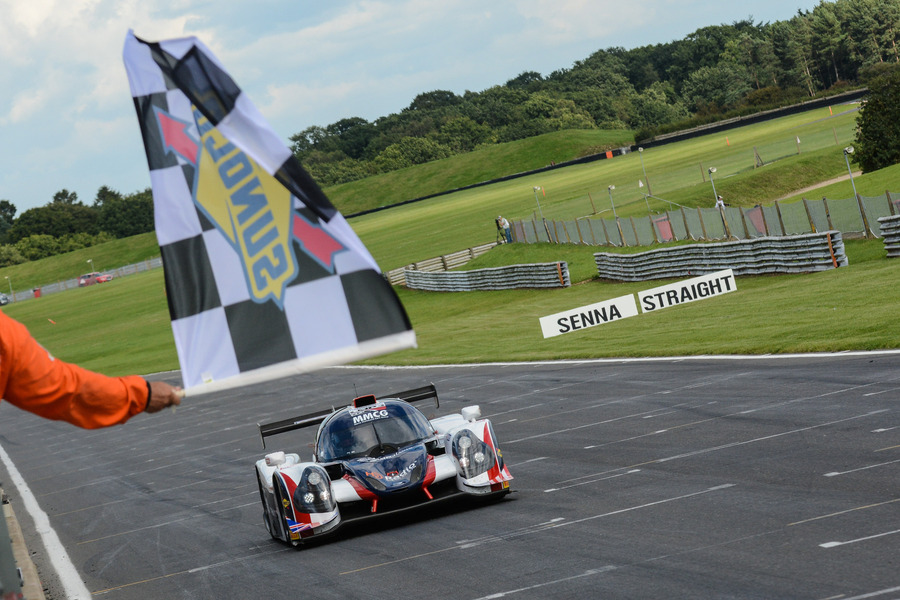 The Anglo-American team will be running their usual full season entries for Christian England and Andrew Evans in the #2 Ligier JS P3 and Tony Wells and Matt Bell in the #3 Ligier at Donington Park as they return to where the championship started back in April. They will be joined by the Red River Sport duo of Bon Grimes and Johnny Mowlem in the #22 Ligier JS P3, while in the #32 Celebrity Car Ligier JS P3 will be Sir Chris Hoy and the Sports Insure Young Driver Initiative winner, Sandy Mitchell.

Christian and Andrew will be hoping to end the season on a high after their double podium and maiden win at Snetterton. They will also be battling it out with the Speedworks Motorsport Ligier of Jack Butel for third in the championship. Tony and Matt sit in a comfortable second place in the standings, but will be aiming for the double win that has eluded them so far this season.

Johnny and Bon join the team for their first official race in the Red River Sport Ligier JS P3. They will both be hoping for a good result in their first outing with the team. Scottish duo Chris Hoy and Sandy Mitchell will also be racing a Ligier JS P3 for the first time as they team up in the Sports Insure Celebrity Car. Sandy Mitchell was the lucky winner of the Sports Insure Young Driver Initiative, where 10 finalists were voted for by the public to win a drive alongside Sir Chris in the United Autosports Ligier.

Christian England, driver car #2, United Autosports:
“I'm really looking forward to heading back to Donington Park for the final race weekend of the Henderson Insurance LMP3 Cup Championship. Coming off a successful winning weekend last time out at Snetterton, our aim is to continue that performance for the last two races. We showed good pace at the first two races of the season and now Andrew will be returning to a track where he has competed previously, we should be able to get stuck in. With the championship already decided, whatever happens we plan to enjoy the race weekend and put in a strong performance. The racing in the championship this season has been great and I have very much enjoyed the format of the whole event.”

“After our win at Snetterton last time out, I feel that Christian and I are in a good position going into Donington Park. We've made big improvements in the car and in myself. Like Snetterton, I've driven this track before and feel confident around it. I'm excited to finish the season on a strong note!”

“What a great first year with United Autosports and the Henderson Insurance LMP3 Cup Championship. We've thoroughly enjoyed the team, car and the circuits and although our year-long battle with Alisdair [McCaig] and Colin [Noble] ended with a freak oil pump failure last time out, it's been great competition and some exciting racing. Competition will be tough at Donington and this field is looking good for next year's championship - but let's if see I can pull my finger out and put the car on pole and Matt and I can go out on a high with a couple of wins.”

“I always love racing at Donington, it’s the venue where I’ve had the most success in my career so I’ll be aiming to continue the five year podium streak if possible. We’ve made good steps forward with the car since the first round and we were able to score a second-place finish there last time out so we’ll definitely be targeting two wins once again to end the year on a high. I’ve enjoyed the first year of the championship. There’s been an extremely high calibre of competition, highlighted by our championship battle with the Ecurie Ecosse car. Unfortunately, bad luck lost us that battle but I’d like to be back next year to have another go that’s for sure! “

“Bon and I are really looking forward to our upcoming race at Donington in the Red River Sport Ligier JS P3. Not only will we have the full support from United Autosports, but we will also be driving on what is a fantastic track for prototypes in particular, so the Ligier should be a huge amount of fun to drive around there, especially down through the Craner Curves!"

“My motorsport journey so far with Red River Sport has been short but very exciting and stepping up to race the Ligier JS P3 is yet another challenge‎ for me to learn. Johnny and I are looking forward to racing with United Autosports. We will have a very busy weekend at Donington Park as we are racing in both the GT Cup as well as the Henderson Insurance LMP3 race, but it is an amazing opportunity to get as much racing in over the weekend as we possibly can.”

“I had a good initial test with United Autosports even though it was under terribly wet conditions. But in terms of getting back in an LMP3 car, I really enjoyed it. I’d never driven a Ligier before but it was fun and it has reignited that passion for LMP cars. I’m really looking forward to the Henderson Insurance LMP3 Cup Championship race at Donington. If we can get some dry running that would be nice but even if it’s wet I think it will be great fun. I’m excited to be competing in a racing car again."

"I am really looking forward to driving the Ligier JS P3 at Donington. It will be an exciting and thrilling new challenge for me. With the wealth of experience that United Autosports have in LMP3 I couldn't be in better hands. This will be an incredibly exciting weekend driving with Sir Chris Hoy as my team mate and I would like to thank everyone involved for putting this incredible prize together."

“This year has gone so fast – it doesn’t seem like five minutes since we were hosting the first round of the championship at Donington Park and now we are racing in the last event of the year. Christian, Andrew, Matt and Tony will all be battling it out for wins this weekend and will be joined by four new team mates who I have no doubt will also be challenging for podiums and wins. It will be good to welcome Johnny, Bon, Chris and Sandy to the team as well. I’m pleased to see the commitment from other teams too, getting cars together for the final round, adding to the competition we have already faced this year. Although the championship is wrapped up, we still need to work hard to get Andrew and Christian up to third in the standings. I’m looking forward to a good race weekend.”