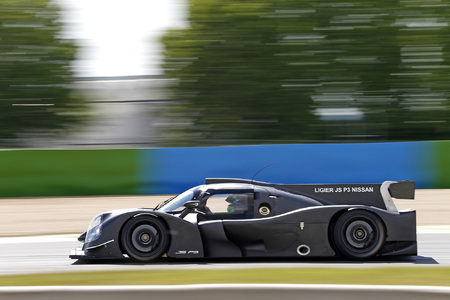 United Autosports will team up with fellow Yorkshire companies, Gala Tent and Gala Graphics for their debut in the European Le Mans Series as they enter two Ligier JS P3 cars in the European championship.

Gala Tent, who are based in Rotherham, South Yorkshire, are the UK’s leading distributor of marquees and gazebos catering for both domestic and commercial customers and have over a dozen international distributors. Along with branded marquees and gazebos, their sister company Gala Graphics offer vast printing capabilities, providing anything from a business card to banner flags, full branding packages and bespoke printing orders as well as a variety of accessories. Gala Tent will be entering the sporting arena with a motorsport focused product range.

United Autosports will continue their LMP3 testing programme at Imola on 15-16 March, followed by the official ELMS prologue at Paul Ricard on 22-23 March. The 2016 ELMS season will begin on 15-16 April at Silverstone, UK.

“I’m thrilled to welcome Gala Tent and Gala Graphics to the team. The product range is top quality and ideally suited to United Autosports and motorsports in general. The LMP3 grid is so vast this year and I am sure we will generate excellent exposure for their products and brand. The ACO have done really well making LMP3 so popular in a short space of time. I’m really pleased United Autosports will be a part of that. I’m excited it’s all coming together.”

“This partnership agreement ticks all the boxes as we get to support a Yorkshire based team in United Autosports, whilst building the Gala brand on an international basis. Both Zak and Richard are widely respected in this industry and there is a definite need for the quality of product and price point that both Gala Tent and Gala Graphics can provide.”

“I’m really excited at the opportunity of getting involved with United Autosports. Motorsport has always been a great interest of mine so this is a perfect fit. The partnership will be a great opportunity for Gala Tent to get noticed in the motorsport industry for our products and printing service which are ideally suited to this market. United Autosports are a very impressive race team and Gala Tent are delighted to be playing a part in getting Christian England in the car for 2016, he is a great talent, as are all the drivers in the team. I can only see great times ahead for them so Gala Tent are proud to support them on the way.”

“I’m really excited to be joining United Autosports for the 2016 ELMS season. Although the championship and Ligier car will be all new to me, I worked with many of the guys at United previously during my time at JLR in Formula Ford and I feel immediately at home. I’m really looking forward to getting stuck in and working with the team and the car to deliver on our past performances together. It’s fantastic to be working with Gala Tent too. The team, Gala and I are all from Yorkshire and we are all ready to put in the hard work to have a successful partnership on and off track.”