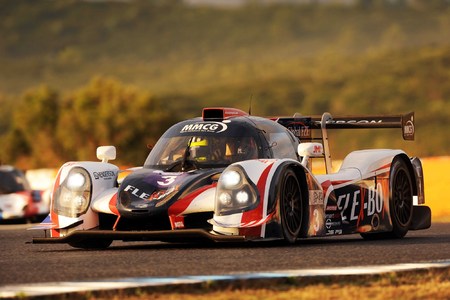 United Autosports brought the curtain down on a phenomenally successful maiden European Le Mans Series season when the LMP3 championship winning Anglo-American team scored its eighth podium finish in the sixth and final race on Sunday (23 Oct). Matt Bell/Wayne Boyd/Mark Patterson placed second in the 4 Hours of Estoril while the sister Ligier JS P3 of already crowned Driver’s champions Alex Brundle, Christian England and Mike Guasch recorded an unrepresentative 11th in the Portuguese race – marking their first race off the podium. The team and drivers collected their silverware at the championship Awards evening held at the Casino in Estoril (23 Oct) having shown phenomenal pace especially in the early stages of the race.

Brundle (#2 Ligier) and Boyd (#3 Ligier) started the race around the 2.6-mile Autodromo do Estoril from first and second positions on the 18-car LMP3 grid respectively after their efforts in a wet track qualifying session the previous day. It marked the #2 car’s first pole of the season, the #3 car’s fourth front row start, and the team’s first front row lock out. The United duo ran comfortably 1-2 – an amazing sixth and seventh overall in the 36-car field early on – Alex an incredible 40 seconds ahead of the third-placed LMP3 car after an hour when he pitted to Guasch while Patterson took over the second-placed #3 Ligier from Boyd.

But just 10 minutes into his stint, Guasch was nudged from behind under braking by another LMP3 car, Mike becoming beached on the kerbs having been spun backwards at Turn 4. The American lost valuable time in the undamaged #2 Ligier, unable to gain traction in the gravel to get off the kerbing, and eventually resumed 10th, slipping back further places due to cold tyres, while Patterson ran fourth. Further drama struck the #2 Ligier at mid-distance when Guasch went wide over the kerb and on to the wet artificial grass surface with his left side wheels sending him across the track and into a slow-moving Ferrari – England taking over after a new front nose was fitted. Patterson, meanwhile, pitted under Safety Car conditions – caused by the Guasch incident – Mark remaining second despite having to serve a drive-through penalty for speeding in the pit-lane.

Bell took over the #3 Ligier with 53 minutes to run, Mark having lost a place just before the car’s final pit-stop, but was back into second place with 28 minutes remaining and took the chequered flag in the class runners-up position with England coming home just outside the top-10.

While United’s inaugural ELMS campaign has closed out, the UK-based team competes in the Gulf 12 Hours (16-17 Dec) with a three-car Ligier JS P3 sports prototype line-up. The event features LMP3 cars for the first time in the six-year history of the event. United Autosports has raced in the Gulf 12 Hours on two previous occasions, scoring a podium finish with an Audi R8 LMS in 2012 courtesy of Ryan Dalziel, Enzo Potolicchio and Alex Popow.

“It was great starting from pole for the first time this year. My start was decent and I had really good pace throughout my stint, the engineering guys did an awesome job in giving me a very fast race car. It’s a shame we didn’t keep up our record of finishing on the podium in every race but I am more delighted the more I think about our championship victory. Standing back from it puts it into perspective in terms of how far the entire team has come from the start of this year and how hard they’ve all worked to achieve the required performance that ultimately brought United Autosports title success. An intermediate tyre would have been the preferred choice for the conditions in qualifying on Saturday but we don’t have that option in this championship – it’s either slicks or full wets. But in fairness the grip came in immediately which is when I set my pole time. Thereafter the stressed rear tyres not surprisingly overheated on the drying track.”

“It was a difficult race. Alex had a mega stint but unfortunately Mike got pushed around and then made a small mistake so I just went out and basically enjoyed myself for a couple of hours until the end. But what we achieved this year is remarkable. Estoril was the only race we weren’t on the podium and our success was down to every team member and I can’t thank them enough. On a personal level I still can’t believe that after such a long period away from the sport, I’ve come back and been a part of a championship winning season. To be here for United Autosports first prototype winning championship, makes me very proud.”

“It just wasn’t my day today. I took a hit up the back, spun and was beached on the kerbs. It was unfortunate as I lost a load of time getting back on track. Later I saw a car going slowly ahead to my right, I went a little wide, putting two wheels on the grass, and unfortunately I hit the slow car. The front was broken up causing a pit-stop for a new nose then Christian took over. Thankfully we’d done enough in the other races to win the title.”

“I enjoyed the final stint, challenging and ultimately getting second place, and then managing to drive away from him. A lot of the hard work had already been done by Wayne and Mark – plus Doc on the pit wall who managed our strategy perfectly especially pitting us under the Safety Car. It’s good to get another podium while this is probably the most satisfying as it was our smoothest race of the season.”

“I was both happy and a little disappointed on Saturday afternoon. I’ve been in the car three times for qualifying this season and each time I’ve put it on the front row. I wanted to make it three poles from three but I didn’t push hard enough on the first flying lap when the fastest times were set. After that I struggled to find a clear track. It was a good race for us and great to be on the podium again. I was a little disappointed with my opening stint, I struggled a little with my ultimate pace compared to the sister car.”

“My day could only have been better if I hadn’t released the pit-speed limiter a fraction too early which cost us a drive-through penalty. That said, it didn’t affect the race result in any way. Our car had a wonderful race, Wayne, Matt and I having set our sights pre-race on a minimum of achieving a podium and that’s what we got.”

“We clearly had the two fastest LMP3 cars in the race and so to only record a second place is frustrating. Both of our Ligiers got off to a great start but the #2 car had some errors in the middle of the race putting it out of contention while the #3 car came through to score a second although I would have loved to seen it win as it had the pace all year but suffered from bad luck on multiple occasions. To summarize, it would have been nice to sign off with another win but what a great season we’ve had.”

“Both cars dominated the race in the early stages and disappeared down the road. I shouldn’t be but I do feel disappointed with only a second place to come away with – such has been our form this year. But at least one United car has finished on the LMP3 podium in every race so it’s been an amazing maiden season for us. The #3 car deserved to win at least one race this year that’s been the only black mark on our year.”