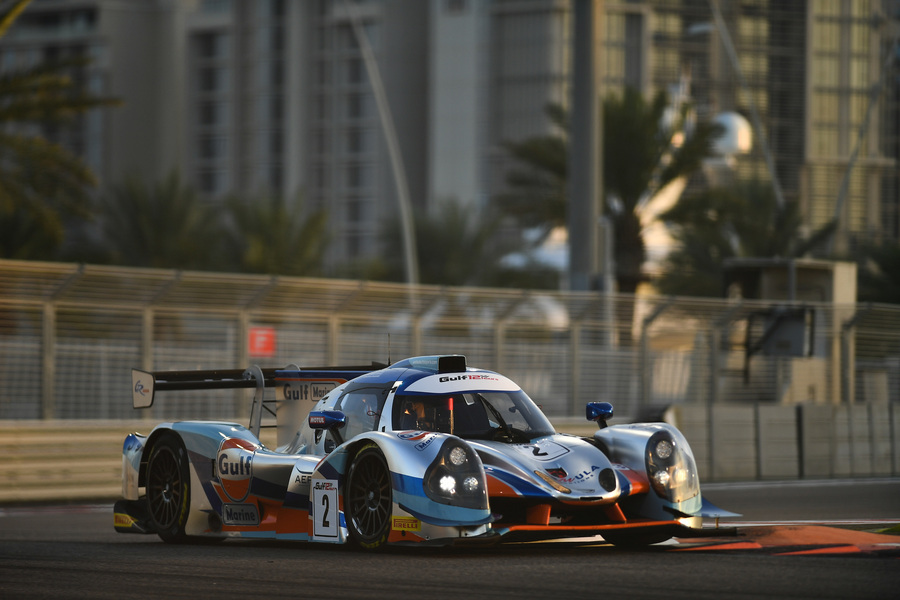 United Autosports brought down the curtain on an ultra-successful four-year campaign with Ligier’s first generation LMP3 sports-prototype with a second place finish in the Gulf 12 Hours yesterday (14 Dec). The British team contested the two, six-hour races with Richard Meins, Shaun Lynn and Jim McGuire piloting its Ligier JS P3 at the Yas Marina Circuit in Abu Dhabi. It marked the third time United had contested the annual race having won the “Gentlemen’s” category in 2017.

The United #2 Ligier started from class pole and then led much of Race 1 until contact with another car caused a near 16 minute pit-stop to repair a damaged steering rack mounting with two hours remaining – resulting in a second place finish. United served two drive-thru penalties in Race 2 but nevertheless came home just a lap adrift of the class winners after battling back in style.

United claimed the 2016 and ‘17 European Le Mans Series LMP3 titles with the Ligier JS P3 and has scored an amazing 18 wins, 53 podiums and 15 pole positions. United will campaign the new Ligier JS P320 in the ELMS and Michelin Le Mans Cup in 2020.

Richard Meins (GB), #2 driver, United Autosports:
“It was great to be back racing with United. It has been a gas and I’ve enjoyed it so much, racing with Shaun and of course Jim again. We have had a lot of laughs. One particular incident basically lost us the race but that’s the way it goes. I didn’t realise Jim had had an issue with another car when I got in the car but on my out lap, at one of the fastest corners on the circuit, I turned right and the car decided to go straight on heading for my hotel room which was a little bit nerve wracking! We were really unlucky with that. It’s just one of those things. But otherwise I think everyone drove well. It’s a fantastic circuit. Everyone has done a good job. Thanks to everyone.”

Shaun Lynn (GB), #2 driver, United Autosports:
“It was an amazing race, I loved every minute and I’ve had a great time. It was a shame what happened to us. We had a couple of penalties too. If that hadn’t have happened we would have won. The Ligier was amazing and the team were faultless. They did amazing work all the way through the whole race. Especially in between the races where there is a limited amount of time. The guys did a great job to get the car turned around so quickly. Well done United."

Jim McGuire (USA), #2 driver, United Autosports:
“A mega effort today by all drivers. A hard race for us. We got two laps up on our LMP3 rival in Race 1 in my second stint but unfortunately at the last corner of my last lap coming into the pits for a driver-change, a Ferrari went out of control and hit me. It was a tough break that wasn’t really necessary. Six laps down and came up a lap short at the end. A great day to finish the season. Great job by the team. Everything was a lot of fun. Looking forward to next year’s racing”.

Zak Brown, Team Owner and Chairman, United Autosports:
“The Ligier JS P3 has been a phenomenally successful car for our team and was the car that began our sports-prototype era in 2016. So it’s very fitting we ‘retire’ it with yet another podium. Richard, Shaun and Jim had a blast in Abu Dhabi and it’s a race United is sure to contest again with the new generation Ligier LMP3 in the future.”

Richard Dean, Team Owner and Managing Director, United Autosports:
“I was in Abu Dhabi with the team until Thursday evening and then went to Bahrain but I tried to keep tabs on what was happening there. It was a shame they ended up second due to an unfortunate collision early on, losing time with repairs. They were quick enough to win but they’ve all enjoyed themselves and had some fun which is the main thing for them. It marked our last race with this LMP3 car and it’s been unbelievably successful for us.”