UNITED AUTOSPORTS IN SHAPE FOR ROLEX 24 AFTER CONSTRUCTIVE “ROAR” TEST 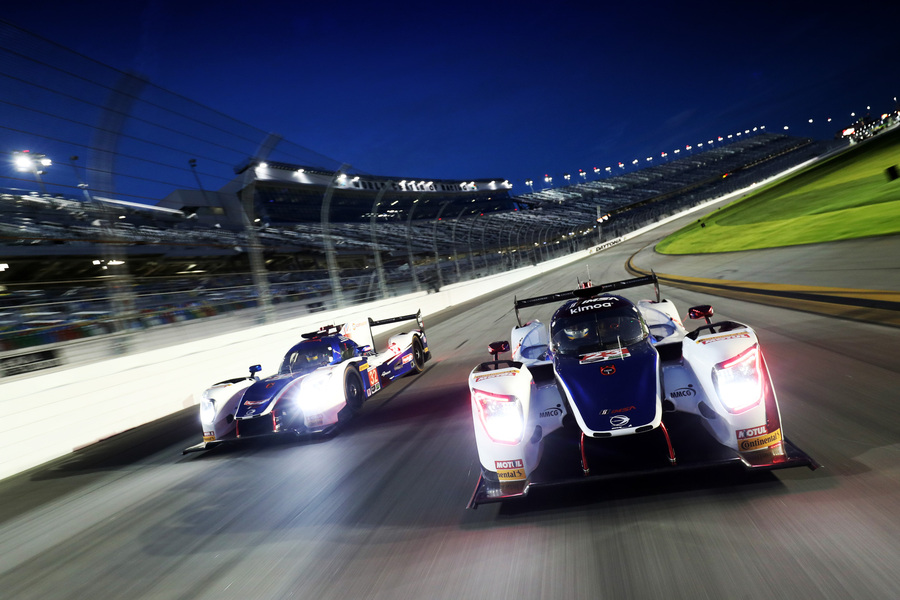 United Autosports will return to the Daytona International Speedway later this month primed for the Rolex 24 At Daytona race week (25-28 Jan) after a constructive three-day official test at the Floridian venue which finished today (7 Jan). The Anglo-American team clocked up a total of almost 1,500-miles with its brace of Ligier JS P217 sports-prototypes at the “Roar” that compete for top-placings in the annual race being run for the 56th time. It accomplished its pre-test aim of gaining valuable experience of Onroak Automotive’s latest “joker” package featuring updated [front] aerodynamics and the U.S. series’ “stock” Continental tyres both for the very first time with all of its seven drivers.

Practice was split into seven sessions over three days with a total of 510mins of on-track time for the 50-car, three class field which included evening running last night in preparation for the opening round of the IMSA WeatherTech SportsCar Championship. Five of its seven driver squad had never even seen, let alone driven on the 3.56-mile, 12-turn course utilising sections of the famed DIS “banked oval” plus infield section prior to Friday’s opening test session. Single-seater exponents, double former F1 World Champion Fernando Alonso (SP), 2018 McLaren F1 official test and reserve driver Lando Norris (GB) plus ex-F1 driver Paul Di Resta (GB), were experiencing only their second test in the Ligier while Bruno Senna, United’s only driver with previous Daytona race experience, had his very first run with the team on Friday morning.

United Autosports, double European Le Mans Series LMP3 champions (2016 & ’17) and ELMS LMP2 runners-up in its maiden season last year, has previously competed in a number of twice-around-the-clock races since its formation in late 2009 including Le Mans – an amazing fifth overall and fourth in LMP2 on its race début last year – Spa and Dubai (both GT3). While 2018 marks United’s maiden Rolex with its own standalone team, in 2011 it partnered Michael Shank Racing with a Riley-Ford Daytona Prototype and finished a mere 0.75secs away from a Rolex race début podium finish – less than four seconds behind the winning car – one of four GRAND-AM Rolex Sports Car Series races it entered that year. United’s last appearance at Daytona was at the 2015 Classic 24 Hour when UA team owners, Zak Brown and Richard Dean, shared the driving duties of the former's 1986 Porsche 962, 1981 Porsche 935 and 1985 Ford Mustang. United, sole UK agents for Onroak’s range of LMP3 and CN cars, also restore and maintain in addition to racing a range of historic race cars.

“It’s been a positive test but we need to find more pace. It was good to experience the Daytona track for the first time. I now feel better prepared for the race in terms of having to make compromises due to sharing the car. It was good to work with Lando, Phil and the team. Driving in the night session was not a big difference as the circuit is well illuminated – also in F1 we have some races in the dark – I had no big issues with that or the traffic. I had a very nice welcome from the American fans and cannot wait to see more of them at the race.”

“It’s a steep learning curve getting to grips with our new aero package combined with running on Continental rubber, a tyre which is completely alien to us in Europe, and in cold weather conditions. It’s a case of finding the key to unlock the performance but I’m sure we’ll ultimately get the sweet spot. The Speedway is incredible – the steepness of the banking is amazing – but I quickly adapted to it. I’m already counting down the days to coming back here for race week.”

“We’ve made progress every day and all three #23 drivers are working well together but there is still a way to go in terms of car performance. I arrived at Daytona with less than 200 testing miles from Paul Ricard under my belt. We’ve been playing catch-up compared to our rivals due to Ligier’s new aero kit which we’re running for the first time. Although we’ve had seven sessions over the past three days, with three drivers sharing the car the time behind the wheel goes very quickly. But it’s been a fun experience and the DIS is super cool.”

“I’m really looking forward to the race. The track is incredible, like nothing in Europe, while the banking is massively exciting to drive on. I also like the infield section. We’ve completed a lot of work over the three days. We had some small issues on the first day but nothing since. We’re down on outright pace compared to the opposition but hopefully that can be reduced. There’s been an amazing atmosphere even though it’s only testing with exceptional drivers and exceptional teams in the paddock. Just a great experience.”

“The Roar has given me a good taste of what the Speedway, and especially the oval, is all about. On my first run the steep banking made me feel a little dizzy and it was an interesting experience having cars running either side of my car. Bruno, who has previous race experience here, is able to pass on tips but all seven United drivers are working well together. Sharing a car is a different scenario for me but it’s proving enjoyable. It’s a strong field with the majority already very experienced with the way the US racing scene works.”

“I’m the only American in what is an Anglo-American team and so it feels especially good to be here on ‘home’ soil. I came to Daytona last month for the first time and I love the Speedway – it’s a pretty unique place. We’ve faced some challenges over the past three days, it hasn’t been easy sorting the car, and we’re still figuring things out especially concerning the [Continental] tyre. We’ve definitely made progress and I’m certain that United will have figured it out in time for the race. There’s a ton of promise.”

"It’s been my first test with United and it has been a cool experience. The team spirit is awesome. We’re still early in the car’s development cycle with plenty of potential still to be unlocked. The lack of outright pace has been a little frustrating but today’s qualifying doesn’t mean we’ll not be competitive in the race. There’s a lot of work to be done before the race but hopefully the engineers can get a better understanding of the car and work their magic for when we come back."

“I’m very excited about United competing at the Rolex 24 for a second time. We’d originally planned a one-car entry but here we are at the Roar with two cars, each with outstanding driver line-ups. It’s been a tough test for us with masses for everyone to learn in a short space of time. The Rolex will unquestionably be difficult but it’s a long race which will hopefully allow us to show the endurance skills that has brought us multiple race and championship success in Europe.”

“We’ve learned an awful lot over the past three days and accumulated masses of data which we’ll now analyse. I firmly believe that we’ll come back for race week in a good position in terms of pace compared to our rivals. The Roar has been a big challenge and at times difficult for us but nevertheless a vital event. We’ve needed to adapt much of our equipment – the requirements are totally different to what we’re used to in Europe. Everyone in the team has worked extremely hard and this past week will allow us to come back much stronger and better prepared.”