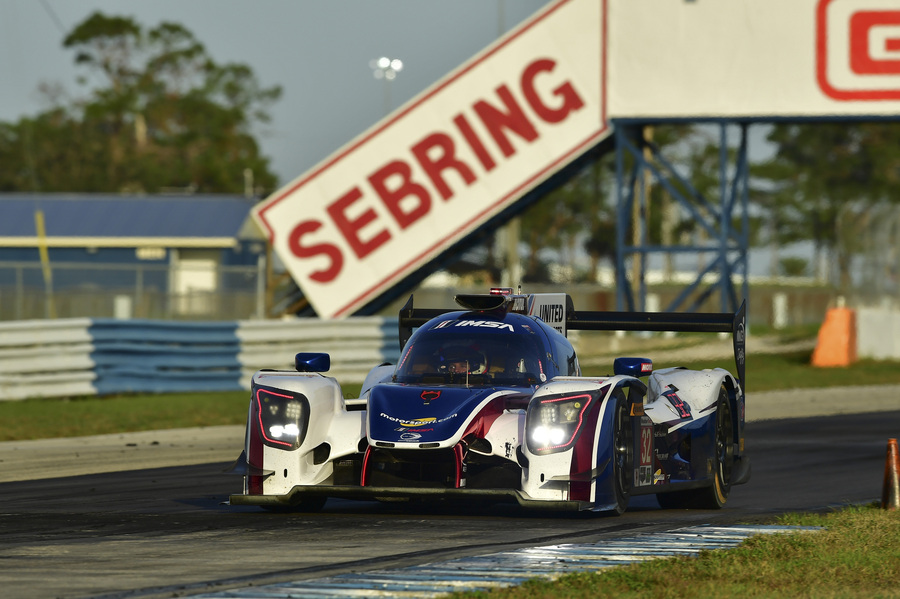 United Autosports has completed a successful test in preparation for next month’s Mobil 1 Twelve Hours of Sebring. The #32 Ligier JS P217 LMP2 sports-prototype completed over 1,000 trouble-free miles in the two-day test at Sebring (22-23 Feb). The Anglo-American team led the opening round of this year’s IMSA WeatherTech SportsCar Championship with both of its Ligiers at Daytona last month (27-28 Jan) and looked set for podium placings before Di Resta/Bruno Senna/Will Owen/Hugo de Sadeleer ultimately recorded fourth place in their #32 Ligier.

Although similar in length at 3.74-miles, the Sebring International Raceway offers a totally different challenge to man and machine compared to the one presented by the unique 3.65-mile Daytona International Speedway that features steeply banked sections. The 17-corner Sebring track, approximately 150-miles South-East of Daytona but again in Florida, is the oldest road course in North America. Like Silverstone, the British track that has seen multiple triumphs recorded by United in the LMP2 & LMP3 categories since it entered the sports-prototype class less than two years ago, Sebring is a former WWII airfield.

Widely regarded as a car “breaker” due to the exceptionally bumpy nature of Sebring’s front straight constructed of concrete originally laid in 1941, a winning car can expect to record over 1,000-miles at an average speed of 100mph. It’s also physically demanding for a driver with ambient temperatures often exceeding 25 degrees Celsius while rain has only affected the race on seven occasions in the last 65 years. For 2016-17 Asian Le Mans Series LMP3 champion Phil Hanson and former DTM champion Paul Di Resta, Sebring has been a completely new experience this week and a totally different proposition to their maiden U.S. car race last month. United’s 2016 European Le Mans Series LMP3 champion Alex Brundle was a last-minute replacement for Bruno Senna who missed the test due to ill-health. Over the past two-days, the team fine-tuned the Ligier which ran faultlessly, with all three drivers taking the wheel in most sessions and conducting both short and long runs.

Due to United’s collaboration with Andretti Autosport, the team arrived at Sebring with a brand-new trailer, resplendent in United colours for the first time, along with a new tractor unit. Coming on the back of the Walkinshaw Andretti United association, the Ligier will go back to Andretti's Indianapolis base after next month’s Sebring race. United is contesting the Tequila Patrón North American Endurance Cup for the first time which encompasses the four iconic races in the IMSA WeatherTech SportsCar Championship. Official practice for the 66th Mobil 1 Twelve Hours of Sebring is staged on Thursday 15 March with qualifying for the anticipated 45-car grid the following afternoon. The race is scheduled to start at 10.40am (local) on Saturday 17 March.

Before that, United Autosports will be busy testing in preparation for its 2018 European Le Mans Series campaign early next month. Hanson and Filipe Albuquerque plus Hugo de Sadeleer and Will Owen share Ligier JS P217 LMP2 driving duties at an official Dunlop tyre test at Aragon (4-8 Mar). Meanwhile reigning ELMS LMP3 champions John Falb and Sean Rayhall plus Tony Wells, Matt Bell and Garett Grist – the Canadian having his very first run with United – are out at Portimão in LMP3 machinery (5-7 Mar).

“I was busy at the McLaren launch but I’ve been in constant contact with Richard each day. It was vital to clock miles at Sebring in advance of the 12 Hours next month and we’re looking in very good shape for the race. Meanwhile our collaboration with Andretti Autosport is proving hugely beneficial with the assistance we’re receiving from our US-based partners.”

“Unlike the Roar test and Rolex practice in which we struggled to find an optimum set-up, I’m delighted to say we’ve enjoyed a competitive and trouble-free test with the Ligier which reacted positively to every change we made. Phil is learning more about the car with every lap and continues to impress me, Paul’s done a very solid job while Alex performed a perfect ‘plug-and-play’ role for us at very late notice. We’ll return to Sebring with high hopes.”

“The test went really, really well. The Ligier reacted better to the changes that we made over the two days which was very encouraging and different to what we experienced at Daytona. We’ve been quick over both days, especially when comparing to the other P2 cars. The Sebring track is unique – just like Daytona is due to its banking. I’ve never experienced such a bumpy race track. I’m really settling in with the team and loving my time here.”

“A positive and productive test. We’ve accomplished what we set out to do. We’ve integrated ourselves with Sebring – which was a new track for me – and collectively, as we tried to do at Daytona, focus on the race by gathering as much information and data as we possibly could for next month. It appears the DPi cars are very fast again so we’ve work to do before we get back here. It was also good for me to do some more night driving as unlike Daytona, there are no floodlights around the Sebring track, and I’d not driven a racecar before in such dark conditions.”

“We’ve had a really good two days of testing and for me to get acquainted to the Ligier P2 car for the first time. I got up to speed relatively well on the first day. The team, who I obviously know well from 2016 when I won the ELMS P3 title, gave me great support. We’ve worked through a lot of set-up variations. The circuit here is very specific in terms of the bumps for the suspension which we concentrated on. It was also good to work with Phil and Paul for the first time, so all in all, an enjoyable and productive couple of days.”