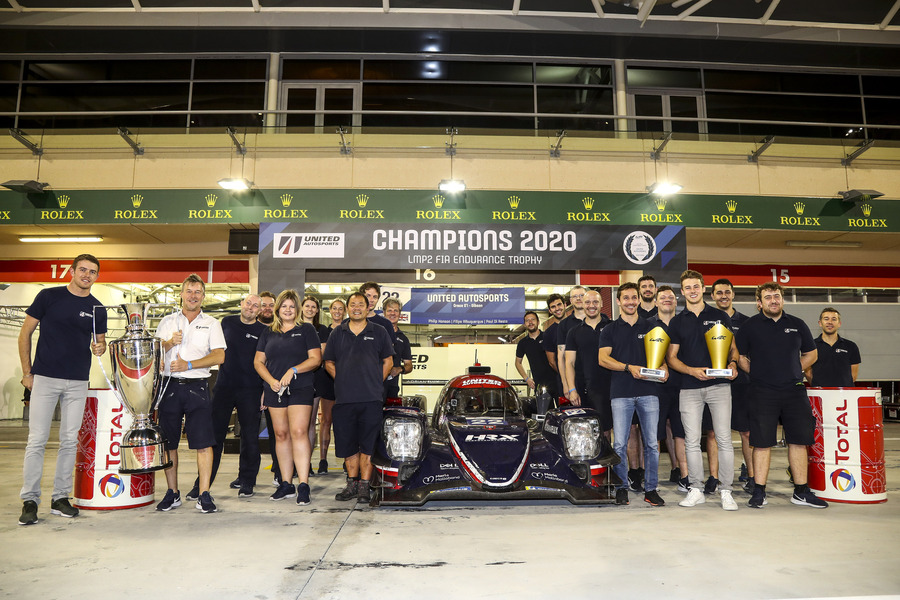 United Autosports were officially crowned FIA World Endurance LMP2 Champions at Bahrain tonight as they rounded off their record breaking season with a fourth place finish at the end of the eight hour race.

The trio started the race from pole position after a fantastic qualifying session by Paul and Phil yesterday, marking their fourth WEC pole and the teams eighth consecutive LMP2 pole position.

The #22 crew had a difficult race, suffering from a fuel pick up problem ahead of one of their pit stops, losing around 50 seconds. They finished fourth by 28 seconds to the winning car.

This year, the team have scored ten wins, 16 podiums and 13 pole positions in 16 races.

“It’s amazing to think how far we have come from a DNF at Silverstone and winning Le Mans and the championship. I’m so happy to be part of a great team with great people. The relationship has been longer than just this year though, its been three seasons. Lots of changes throughout the time with United but I’m just really happy to be part of such a great team.”

“We just needed to start the race to win the championship and that’s what we did. It was a bit of a disappointing race for us. We were one of the contenders but unfortunately many things happened to us to stop us winning, but we came back a bit and finished fourth. But we know we can’t win all of them. We won the big one (Le Mans) and the championship and we go home with the huge trophy and the whole team should be happy and proud of it.”

“I guess the race was quite disappointing. We got the job done yesterday qualifying on pole. The race wasn’t straight forward but these things are sent to test you. We were still in the fight and we had a good strategy and that showed. It’s a shame but at the same time you can’t be disappointed with the way this year has gone. Credit to the team. I think everyone should be proud of what they have achieved in their first attempt at WEC, led by Richard and Zak. The team have had an exceptional year under difficult circumstances.”

“What a year it has been for the team. Three championship wins and a Le Mans win. It doesn’t get much better than that. I’m super proud of every single one of them and they deserve all this success.”

“This was our first time off the podium all year, but its hard to complain when we have had such a great year. I’m proud of all the team and the drivers have done a great job. It’s brilliant to have the celebrations in the pit lane here at Bahrain with the championship trophy.”