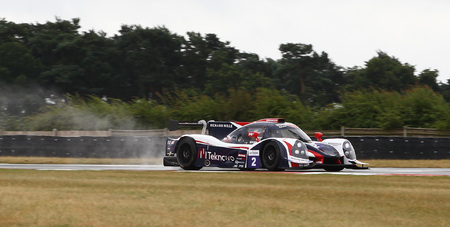 United Autosports have confirmed their first driver pairing for their three-car team at the inaugural British Prototype Cup, held at Snetterton on 8-9 October.

Jay Palmer will team up with Matteo Bobbi in one of the team’s Ligier JS P3 sports prototypes. Jay is no stranger to United Autosports as he raced their Audi R8 LMS in the British GT Championship in 2011. He has also raced in the Blancpain Endurance Series and the Lamborghini Blancpain Super Trofeo. Matteo Bobbi is a former Formula One test driver and was 2003 and 2006 FIA GT Champion in a Ferrari F430.

Jay and Matteo had their first taste of the Ligier JS P3 at one of United Autosports’ exclusive test days in July. As part of their role as Onroak Automotive UK agents, United Autosports have arranged exclusive test days for prospective LMP3 customers and Prototype Cup entrants. The next two-day tests at Snetterton are 7-8 September and 4-5 October. Anyone wishing to book onto either test should contact Richard Dean on Richard@unitedautosports.com or +44 (0)7850 350 296.

“I’m really pleased to be entering the Prototype Cup, especially with United Autosports and Matteo. We raced together back in 2011 so I know most of the team and we work well together. Driving a prototype will be great fun too and I can’t wait to get going. We will be attending the remaining Snetterton tests with United Autosports as we want to get as much experience in the car as possible ahead of the race.”

“I’ve known Jay for a very long time and we work well together. We attended the United Autosports test at Snetterton last month and it was great fun and really useful. I’ve not been in a car for a long time so it was good to blow the cobwebs away. The LMP3 car was superb and totally different to a GT car. They are real fingertips cars, you have to be so precise with the steering and they have lots of power and lots more aero than a GT car so through fast corners they are very stable. I like the look of the Prototype Cup series. It will cost a lot less than something like the European Le Mans Series, but you still get to race LMP3 cars on some great tracks.”

“Zak and I are thrilled to welcome Jay and Matteo to the team for the inaugural Prototype Cup event. We have known Jay for a long time and Matteo’s racing history speaks for itself. I think the Prototype Cup is shaping up to be a great new series. It’s perfect for people who want to get into prototype racing and can work their way up to other championship like the ELMS and eventually to racing at Le Mans. We have some more driver announcements to come and I can’t wait to see how the grid shapes up.”