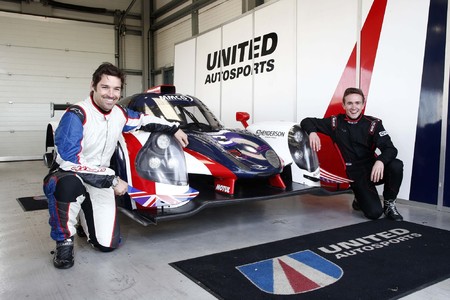 The American duo will race a Ligier JS P3 sports prototype in the first full season of the ACO-backed British Championship.

CJ’s co-driver is 19-year-old Andrew Evans who raced in the 2016 IMSA Mazda Prototype Lites. Andrew began racing karts at the age of eight and moved to racing single seaters in 2013 racing in the Pacific Formula F1600 Championship. In 2014 he won the Pacific Formula F2000 series with successful race team, PR1 Motorsports. He was named Rookie of the Year and scored three wins and seven podiums in nine races. He also broke the SCCA track record at Mazda Raceway Laguna Seca for Formula Continental.

CJ and Andrew will make their British racing debut in the Henderson Insurance LMP3 Cup Championship. However, due to racing commitments in America, CJ will only race at three of the six rounds – Brands Hatch, Spa and Snetterton. United Autosports will be on the look out for a bronze to race alongside Andrew at the remaining rounds – Donington Park National, Silverstone and Donington Park GP.

The championship is the first of its kind in Great Britain to be sanctioned by the Automobile Club de l’Ouest (ACO), organisers of the world-famous Le Mans 24 Hours. The championship will conform to ACO regulations and will visit Donington Park twice, Brands Hatch, Silverstone and Snetterton, with an overseas round at Spa.

The first round of the Henderson Insurance LMP3 Cup is on 22-23 April at Donington Park. For more information, please visit www.ligieruk.com or www.lmp3cup.co.uk

“The only team I would consider driving for in the Henderson Insurance LMP3 Cup Championship is United Autosports. I’ve been very impressed with the team from afar and after sitting with Richard [Dean] at Daytona this year it solidified my impression. My goal is to develop as a driver and climb the ranks to either LMP2 or GTE – United Autosports has proven they can win and develop drivers. Andrew and I decided this is a huge opportunity to get across the Atlantic and challenge ourselves with an incredible platform in LMP3. Plus, I think every racer dreams of racing on some of Europe’s most prestigious and historic tracks. After 16 years as a pro athlete in my first career I’ve got a lot of catching up to do. We will certainly be racking up some airline miles!”

“I’m very excited to be driving for United Autosports in the 2017 Henderson Insurance LMP3 Cup Championship.  This is an incredible opportunity to drive at some of Europe’s most iconic tracks in a Ligier JS P3. Coming out of the 2016 IMSA Prototype Lites Championship, the move to LMP3 is an exciting step in my career. All of this wouldn’t be possible without the continued support of my sponsors, including Spectrum Controls, MPJC LLC and Dobson Motorsport, who have been integral to my career advancement, plus my manager, Dominic Dobson for making this arrangement possible. United Autosports is an exceptional team, providing CJ and I with the foundation we need for success. CJ is a talented athlete who shares my values, work ethic and tenacity – I’m looking forward to driving with him.”

“I’m delighted to welcome CJ and Andrew to the United Autosports team. I’m sure they will love racing the Ligier JS P3 and will enjoy racing at some of the best circuits in the UK. The Henderson Insurance LMP3 Cup Championship is the perfect starting point for these guys and I’m hoping more people will see the benefit of this fantastic new championship.”