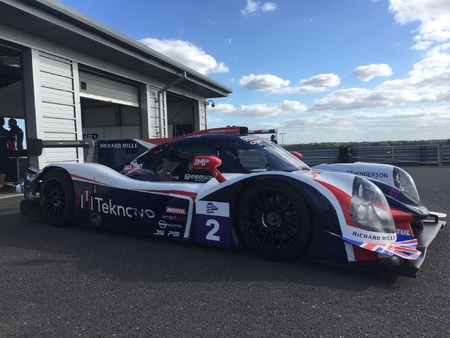 Customers who had bought an Onroak Automotive-manufactured Ligier JS P3 from the Leeds-based team had the opportunity to test their prototype on the Snetterton 300 circuit, exclusively hired by United Autosports. Those drivers and teams who had expressed an interest in the LMP3 Ligiers were also invited to test, using the day as a ‘try-before-you-buy’ session.

A number of drivers attended the two-day test, including British GT championship contenders, Jon Minshaw and Phil Keen. Single seater racer, Jack Butel, also tested one of the Ligier JS P3 sports prototypes, while US-based Guy Cosmo, who raced for United Autosports in the Road to Le Mans race last June, took his first trip to the UK to join the team at their exclusive customer test to drive with John Farano.

Pirelli, who are working with the Prototype Cup organisers on developing tyre compounds for the championship, also attended the test to get some dry running on their slick tyres. United’s European Le Mans Series drivers, Alex Brundle, Christian England, Wayne Boyd and Matt Bell were on had to help the team and Pirelli with the tyre testing.

Onroak Automotive were represented at the test by Christophe Profit, their Sales and Marketing Manager, who was on hand to chat to new and potential Ligier customers. The French manufacturer also supplied one of their Ligier JS 53 Evo 2 CN cars for the test day, which Wayne Boyd and Christian England tested over the two days. The CN class is eligible for the Prototype Cup and can be bought from Onroak Automotive UK agents, United Autosports in the same way as the LMP3 cars.

United Autosports will host their third Ligier customer test at Snetterton on 3-4 October, in the lead up to the Prototype Cup race weekend. Anyone wanting to book onto the test should contact Richard Dean on +44 (0)7850 350 296 or Richard@unitedautosports.com . The Prototype Cup will make its debut on 8-9 October at Snetterton. Entry forms are now available to download at www.prototypecup.com

“We are really pleased the second test for our Ligier UK customers went well and they all got some valuable time in the cars. We are gearing up for the Prototype Cup event in four weeks and not only are we preparing our cars, but we are also fulfilling our Onroak Automotive UK agent role by providing support to the teams who buy cars from us. I think I’m safe in saying that both Tockwith and RLR have benefitted from these days with us and I’m hoping we can build on our relationship with them and the new teams in the future.”