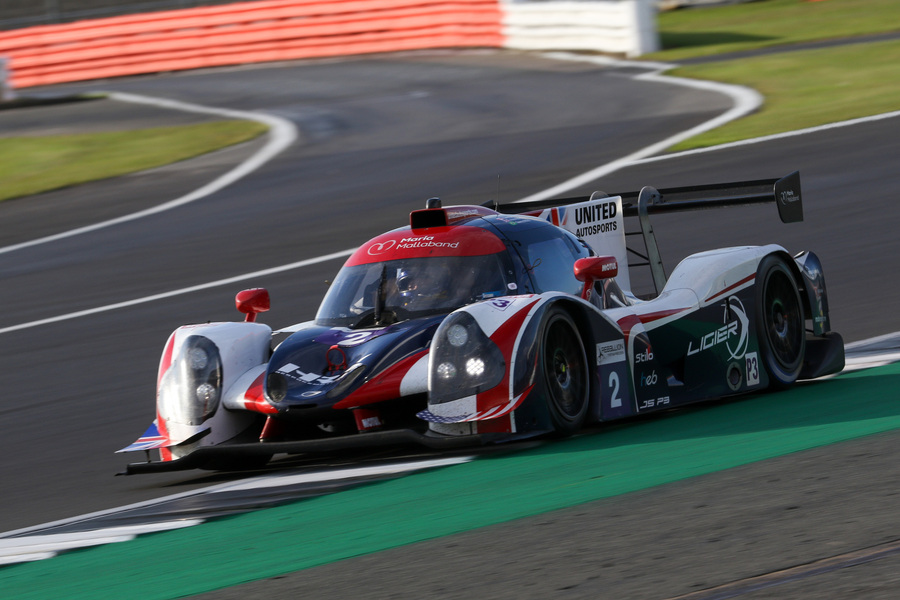 For the fifth time since making its European Le Mans Series début in 2016, United Autosports scored an LMP3 podium placing in its home race at Silverstone. #2 Ligier (Garett Grist/Tommy Erdos/Wayne Boyd) claimed a well-deserved third place in the 4 Hours of Silverstone today (31 Aug) – the crew’s third consecutive class podium this season – but apart from this success, the team endured a torrid time. Fastest in both practice sessions and qualifying P2, it appeared United’s best hope of success would be with its new Oreca with an LMP2 podium at the very least. But #22 Oreca (Phil Hanson/Filipe Albuquerque) retired with an electrical issue after a little over 30 minutes. #3 (Christian England/Mike Guasch) crashed heavily out of second place at high-speed having been tagged by another car while #32 Ligier (Alex Brundle/Ryan Cullen/Will Owen) was classified eighth in LMP2. United are now placed seventh (#22) and eighth (#32) in LMP2 Teams championship while #2 now lies third in the LMP3 Teams standings with #3 ninth. The penultimate round of this year’s ELMS is staged at Spa-Francorchamps (BEL) on 22 Sep.

#22 (PH) and #32 (RC) started from second and 10th places respectively on the 18-car LMP2 grid aiming to repeat United’s outright Silverstone ELMS race win of 2017, both cars pitting for wet weather tyres as heavy rain began to fall six minutes into the race, resuming second (#22) while #32 survived a trip through the gravel on 20 minutes and ran 16th. #22 pitted for slicks (23 minutes) under Full Course Yellow, continuing 12th, a lengthy pit-stop due to a front right wheel nut issue. But #22 was side-lined when an electrical issue caused the engine to cut out and losing its power-steering with 35 minutes gone. #32 Ligier ran 15th at one-quarter distance, Owen taking over with 77 minutes remaining, #32 losing time with a drive-through for an earlier yellow flag indiscretion and lay 11th at mid-distance. Brundle was behind the wheel for the final 75 minutes, bringing their Ligier home for a hard-earned eighth place, despite contact late on, for the second consecutive race.

#2 (GG) and #3 (CE) began the race from eighth and ninth in the 14-car LMP3 field knowing their Ligiers carried better race pace compared to outright qualifying, #2 pitting on lap one to replace a punctured left rear tyre after contact in the opening corners. Neither car pitted when rain fell soon after the start, #3 running P2 and #2 12th, Grist having worked his way up to P8 with an hour gone. Boyd took over #2 on 70 minutes, #3 pitting moments later with England continuing behind the wheel and with two-hours gone, #3 & #2 ran second and third before both cars pitted for driver changes. Minutes later, #3 was unfortunately tagged when being lapped by an LMP2 car, sending Guasch off the track and into the guard rail at high-speed. #2 crucially took a splash of fuel with 62 minutes to run and came home a fine third for the third consecutive ELMS race.

Phil Hanson (GB), driver car #22, United Autosports:
Born/Lives: London, UK. Age: 20
“Started P2, made a decent start and caught the leader just before pitting when it started to rain. Our pit call to pit again for slicks was perfectly timed under FCY. Although we had an issue with the pit-stop, we still would have been in a top-three position after the cycle of pit-stops. But unfortunately we had a series of electrical errors and failures resulting in the power turning off. I went off track and couldn’t restart the car. Hugely disappointing.”

Filipe Albuquerque (POR), driver #22, United Autosports:
Born/Lives: Coimbra, Portugal. Age: 34
“Things like this often happen like this when you have great pace. We had an electrical problem which is out of our control. We pitted Phil for slicks in the right window. Phil had dropped down with a slow stop but we would have got back to at least P3. He had been taking it easy because we knew we had good pace and Phil was doing everything perfectly. It was just bad luck.”

Alex Brundle (GB), driver car #32, United Autosports:
Born: Kings Lynn, UK. Lives: London, UK. Age: 29
“By the time I got hold of the car, we were relatively way back, but the pace of the car was pretty good. We were in the top-five fastest cars I think. I had a touch with Tambay trying to pass him for eighth. I was well down the inside going for the apex and maybe he didn’t see me which cost me a few seconds but ultimately got the job done.  The team did a solid job.”

Ryan Cullen (GB), driver car #32, United Autosports:
Born: Weston-Super-Mare, UK. Lives: Bristol, UK. Age: 28
"I was up against silver or gold rated drivers at the start and tried to keep with the pace having been pushed wide at the start which cost me three or four places. Then it started to rain and pitted for full wets even though it was almost like ‘inter’ conditions. When I went back onto slicks it was much better.”

Will Owen (US), driver #32, United Autosports:
Born: Plano, Texas. Lives: Denver, Colorado. Age: 24
“We were far down at the beginning having lost time for a lot of different reasons. Penalties, a nose change, a lot of stuff but overall I actually really enjoyed my stint. It’s fun to drive this track. I think we had the set-up nailed down and really did the best that we could..”

Garett Grist (CAN), driver car #2, United Autosports:
Born: St. Catherine’s, Canada. Lives: Grimsby, Canada. Age: 23
“Another horrible opening lap for the second race in a row when I picked up a punctured right rear on the opening lap. My pace was really, really good after that and I was told over the radio that I was the quickest car on track for most of my stint. We gambled and stayed on dry tyres in the wet which was really sketchy but ended being worth it. This is the fourth race of the year where we have had two punctures and was taken out in another.”

Tommy Erdos (BRA), driver car #2, United Autosports:
Born: Rio de Janeiro, Brazil. Lives: Milton Keynes, UK. Age: 55
“It’s an incredibly competitive championship with very strong runners but yet again United did an incredible job. The reliability of this car has literally been 100% at every race. It didn’t miss a beat again today. I didn’t have any real issues apart from a little vibration at the front but that was probably down to some rubber pik-up and an LMP2 car that tried to overtake me into Maggots and in a very stupid manner..”

Wayne Boyd (GB), driver car #2, United Autosports:
Born: Belfast, Northern Ireland. Lives: Templepatrick, Northern Ireland. Age: 28
“Another podium and I don’t know how that happened! We all just got our heads down after the puncture on the first lap which was a nightmare and put us in the worst situation. We keep pushing and have been rewarded with good points for the championship. I had a good stint, enjoyed it as it was fairly uneventful. I ended up just behind the leader, a lap down, and just sat with him, which was encouraging.”

Christian England (GB), driver car #3, United Autosports:
Born: Barnsley, UK. Lives: Huddersfield, UK. Age: 37
“My stints were really positive having made the call to stay out on slicks in the rain as we were hoping it was just a shower. It got quite heavy but the FCY came at the right time for us as it allowed the track to dry. Our pace was really strong I closed down the gap to the class leader before I pitted from P2 to hand over to Mike who then had a big shunt with a sudden stop and is battered and bruised. Unfortunately for him, a P2 car made a stupid move into Maggots which sent Mike heavily into the wall. It was a real shame as we were on for a very strong result if not the win. It’s racing and we will come back stronger for the next round at Spa which is my favourite race of the year!”

Zak Brown, Team Owner and Chairman, United Autosports:
“Very happy to get another LMP3 Silverstone podium. Obviously disappointed after the pace the Oreca showed in LMP2 practice and qualifying but we can go into the final two races now knowing we’re definitely in with a podium shot. But the main thing today is that Mike [Guasch] is okay after a massive accident on what has been a sad day in motorsport.”

Richard Dean, Team Owner and Managing Director, United Autosports:
“Mixed emotions but with other news in motorsport today we are not going to complain about anything. #22 made the right call with tyres but then got a fault that we need to figure out. It’s a shame as we obviously had the pace. #32 car got involved in an incident at the start and a trip through the gravel then had a drive through penalty. Christian had a fantastic stint in #3 before Mike got in the car and was an innocent victim. It was not his fault. He went to the track’s medical centre and was transferred to the John Radcliffe Hospital as he has a broken rib. So it was down to the #2 to earn us another podium. They always seem to salvage something out of the race and the three drivers never put a foot wrong.”