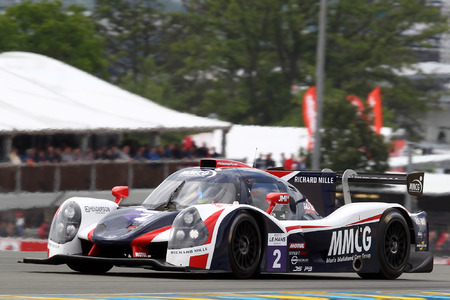 Brundle and Cosmo began Thursday evening’s 30 minute qualifying session having completed a mere two (one on slicks) and three (on wets) flying laps respectively in the two previous weather-affected and red-flagged shortened practice trials. Bright sunshine and a totally dry track greeted the 37-car field, Martin impressively repeating his 1990 Le Mans 24 Hour race pole by setting the fastest time on his seventh and final lap. Guy was unfortunate to only clock the 11th quickest time – a certain better lap thwarted by the red flag appearing for a second time bringing the session to a premature close.

Race morning on Saturday dawned overcast but dry, Brundle and Hedlund starting the #2 and #3 Ligiers respectively from the first and sixth rows. Martin slipped to second place when the fast-starting Ginetta dived down the inside going into the Dunlop Esses moments after the start – Brundle, having incurred no damage despite contact with the Ginetta in the earlier manoeuvre, and Hedlund placing third and 15th at the completion of the opening lap.

Brundle moved up to second with Hedlund also making up a place on lap four, Martin and Mike making their compulsory pit-stops with 30 minutes remaining on lap six, the ninth-placed #3 Ligier, now with Cosmo at the wheel, having to serve a drive through penalty for an earlier pit lane infringement. England was up to second with 13 minutes to run and duly took the chequered flag 16.863 seconds behind the winner after an unfortunate spin early in his stint as he acclimatised to his first laps on slicks. Guy recovered superbly with a fastest race lap on the 13th and final lap, placing fifth.

Anglo-American United Autosports, the sole UK-based Onroak Automotive agents that manufacture the Ligier, return to Le Mans next month for the “Classic” (8-10 Jul) racing a 1986 Porsche 962. United Autosports will be out to maintain its 100% European Le Mans Series race winning record and extend its LMP3 championship lead at the Red Bull Ring in Austria on 17 July.

Martin Brundle, Driver, United Autosports:
“I should be happy standing on the Le Mans podium at my age but I can’t help being a little disappointed – it’s a bitter sweet feeling at the moment but a little bit more bitter than sweet! I was mugged at the first corner. I thankfully saw the Ginetta coming otherwise there would have been an accident. I was slip streamed down Mulsanne which annoyed me, I shouldn’t have let that happen, but then made a really nice pass to re-take second. Obviously getting pole to beat some of the teenagers was nice and overall it’s been a good weekend with us showing good pace throughout. Ligier has produced a tremendous ‘plug and play’ car.”

Christian England, Driver, United Autosports:
“My first laps around the famous Le Mans track on Wednesday evening were in slippery and difficult conditions which was a baptism of fire. I’m a little disappointed to have only finished second – it’s the first race since my comeback this year I haven’t won! I made what ultimately proved to be a costly mistake by spinning coming out of Dunlop. But it has been a great experience driving with Martin, and thanks to the team and Phil Burgan for the opportunity. We got to sample some champagne on the rostrum and take a trophy home so it’s not all bad.”

Mike Hedlund, Driver, United Autosports:
“Our race was pretty good. I was cautious at the start because I hadn’t driven on slicks here before so I didn’t want to make a mistake. I tried to push as quickly and as hard as I could. I wish I could have given the car to Guy in a better position because I knew he was going to be strong. But we still made up some positions to finish a solid fifth. The Ligier, United Autosports, Le Mans and the fans, has all been an amazing experience. I couldn’t have wished for anything better.”

Guy Cosmo, Driver, United Autosports:
“I loved my first experience of racing at Le Mans and it was a great result – overall an incredible dream weekend. The Ligier during the race was fantastic. With each lap I was learning more and experimenting more with the circuit and at the very end I set the fastest lap of the weekend. Apparently I am the Le Mans LMP3 record holder!  I will rest on those laurels for some time. Nevertheless I’m a little frustrated as I know I could have gone faster. With more laps you pick up more speed. I’m really thankful for the opportunity and would love to come back and do some more with United Autosports. We’d had very limited running on Wednesday and Thursday and as a result, my qualifying position was not what I’d hoped to achieve. The Ligier is a lot of fun to drive and of course, racing here at Le Mans has been something very special.”

Zak Brown, Team Owner and Chairman, United Autosports:
“We are pleased to be leaving Le Mans with some silverware. All four drivers and the team did a great job and it’s fantastic to see United Autosports competing at such an important event. Hopefully we will be back next year and go one better.”

Richard Dean, Team Owner and Managing Director, United Autosports:
“It’s always great to come to Le Mans. It’s really nice for me to return having done it three times, 2009 being the last time. For Zak and I to come back now with our own team is a goal we’ve been working towards. We had two great driver line-ups this weekend. Both crews had very little preparation in the build-up to the race so it was tough for everyone. Martin showed with his pole-position that he hasn’t lost it – a class act – and I was really pleased for him. He had to fight for it. Christian, Guy and Mike were all Le Mans ‘rookies’. Qualifying was basically a test session for the #3 car and for them to come through to finish fifth, and with the fastest race lap, was superb. It’s been a great achievement for everyone connected with United Autosports.” 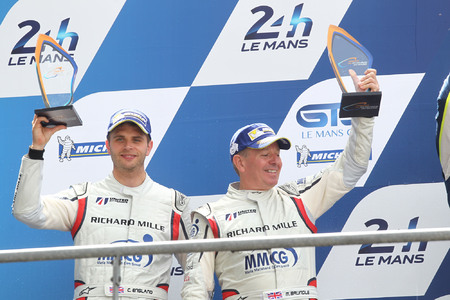