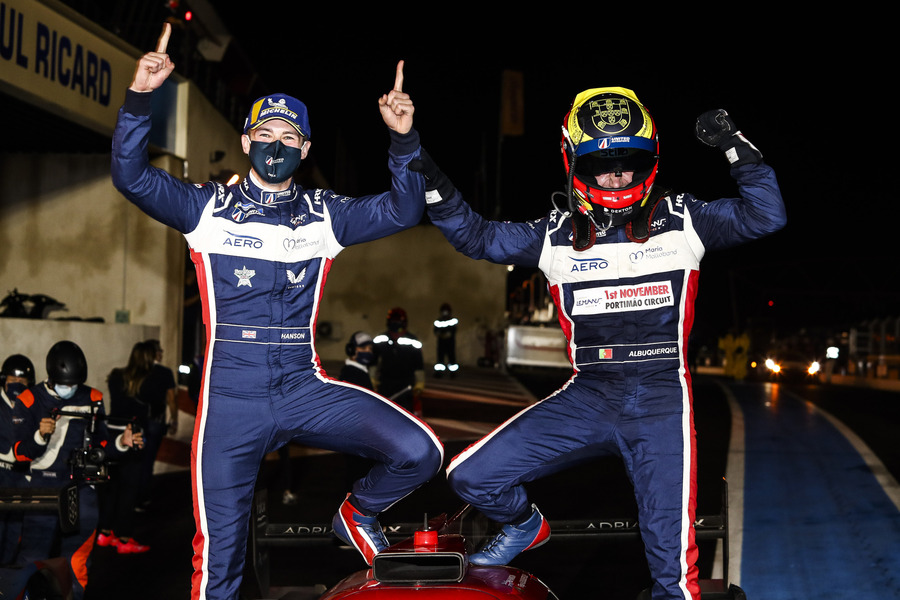 The #3 Ligier JS P320 of Duncan Tappy and Andrew Bentley finished second in the LMP3 class after a great race for the pair. Sadly, the #2 championship leading Ligier of Wayne Boyd, Tom Gamble and Rob Wheldon failed to finish the race after contact caused a broken radiator and damaged engine, which brought their race to a premature end.

The #32 Oreca 07 of Alex Brundle, Will Owen and Job van Uitert finished eighth after a hard race for the trio but an unlucky moment with a safety car dropped them down the order, making it difficult for them to recover.

The team now move on to their biggest race of the year – the Le Mans 24 Hours on 19-20 September, which also acts as round seven of the FIA World Endurance Championship. The #22 Oreca of Phil Hanson, Filipe Albuquerque and Paul Di Resta currently lead the LMP2 championship by 22 points. The LMP3 team will also be preparing for the Road to Le Mans race on 17-19 September.

Phil Hanson lined the #22 up on pole position for the third time this year after a fantastic qualifying from Filipe Albuquerque earlier in the day. Will Owen lined up fifth after Alex Brundle set the qualifying time for the #32 car. Due to the terrible weather conditions, the race began behind the safety car, but as the rain quickly subsided, the safety car came in and after five minutes we were racing. Phil pulled a nice gap to second place at the start, while Will was battling for positions behind moving up to P4 after 15 minutes. Unfortunately, a spin for Will while battling for third, dropped him back down to sixth. Once the track started to dry, the LMP2 grid began to pit to change tyres, mostly to intermediates – Phil in the #22 pitted and changed to slick tyres while Will also stopped and changed to slicks. Both Phil and Will struggled on slicks to begin with running 12th and 13th, but after 1 hour and 20 mins the safety car came out, closing the pack up again. With just over an hour and a half gone, the safety car came in and racing resumed. Phil stopped again with 2 hours and 10 minutes left on the clock, for tyres and fuel, and made his way back out on track. A lap later, Will pitted the #32 and handed the car over to Alex Brundle. After two and a half hours, the #22 pitted again, with Phil getting out and Filipe Albuquerque getting in. A lap later the #32 pitted and Alex switched to Job van Uitert. With just over an hour left to run another safety car was called out to clear an upside down LMP2 car. Once racing resumed Filipe and Job set about making up some places with 50 minutes left on the clock. With 31 minutes remaining, Filipe pitted the #22 for fuel and a front left tyre and went back out again. A lap later, Job pitted the #32 and re-joined to finish the race. With 26 minutes to go, Filipe passed the second placed car and began to hunt down the leader. With just under three minutes to go, Filipe passed the #26 to take the lead, bringing the #22 Oreca home for its second consecutive win of the season. Job brought the #32 car home in eighth place, while also scoring the fastest lap of the race.

The #22 crew now lead the championship by 29 points, while the #32 crew lie second, three points ahead of third place.

Andrew Bentley and Rob Wheldon lined up on the second row of the LMP3 grid in third and fourth respectively after Duncan Tappy and Wayne Boyd qualified the #3 and #2 Ligier JS P320s earlier in the day. The race began behind the safety car, but it wasn’t out for long as within five minutes we were racing. A fantastic start by Rob saw him overtake his team mate, Andrew, before picking off the next two cars in front of him to be leading the LMP3 class by lap four, with Andrew behind him in second. A great battle for Andrew was neutralised when the car he was battling with spun, leaving him free to stretch a gap over the rest of the LMP3 field. After the one-hour mark, both LMP3 cars pitted from first and second on track to refuel and change to slick tyres. Rob running in first place and Andrew running sixth before the safety car came out with two hours 40 minutes left to run. With night time having fallen over the track, and one hour 50 minutes left on the clock, Rob pitted the #2 Ligier and handed the car over to Tom Gamble from the lead. The team also decided to change the nose after contact for Rob earlier in the race. One lap later, Andrew pitted the #3 Ligier to hand over to Duncan Tappy. Sadly, as Tom left the pits, he reported a problem with the #2 and immediately pitted with the team pushing the car back into the garage to repair the damage. Unfortunately, the damage was too extensive, and the team had to retire the car. With just over an hour to go, the safety car was brought out to recover an LMP2 car, while also clearing a broken down LMP3 car. As racing resumed and other cars around him pitted, Duncan took back the lead of the race before pitting once again himself with 33 minutes remaining and re-joining the track still in the lead of the race. Unfortunately, with 12 minutes remaining Duncan was passed and dropped to second, but held on to bring the #3 Ligier home for its first podium of the season.

“I think this was the toughest race I’ve ever driven. There was a point when I was out on a wet track on slick tyres and it was so difficult to manage. I knew we were leading the championship but I knew I couldn’t afford to take any margin because we were so slow. I was so thrilled that I could be on the limit so much without making a mistake and that for me personally is a big win. As soon as everyone went to slicks I felt really strong. Filipe then got in and finished the job. We were driving angry because we thought we’d lost the race, but it all played into our favour. We made it very difficult for ourselves today but if we can make it that difficult and we can recover then I don’t know what we can’t do.”

“It was a crazy race. Hats off to Phil really – he pulled his part of the race off perfectly, just like a professional driver and he compensated for the issues we had. He did a great job to not crash the car in tough conditions and I’m super proud of him. I think our race was minimising the risk to the championship. I took it that today was not our win to have. I pushed like mad because we had a great car. When my engineer told me I was P6 and then P5 and the P4 and then second, I was honestly happy with P2, but then I caught the #26 and I saw he was fighting hard with everything he had and I thought I just have to think about the championship, but the move was there and it was clear so I went for it – I don’t know how it happened. We pushed and ended up winning the race which is just incredible.”

“We were unfortunate today with how the race fell, but we can take heart from the pace of the car and performance of the team.”

“It was a tough day that we will learn from but we know our pace in the dry is there. Now we are thinking about Le Mans.”

“I drove my heart out today. I couldn’t have done anymore and getting fastest lap showed how much I was pushing towards the end. We deserved more today than we came away with.”

“Obviously we are very disappointed. Robs pace for his first couple of stints was fantastic and it set the race up for Tom and I. But unfortunately with motorsport you need a bit of luck and that wasn’t on our side today but the positive is that we go to Monza still with a championship lead and we will be pushing for a win there.”

“Things didn’t really go our way today. Rob did an incredible stint and got us into the lead when the conditions were tricky. Then he had some contact with a Porsche and he was really unlucky with the damage it caused. When I went out on track the water temp went really high and that was it really, race over. But it was just one of those days, we’ve had a really good start to the year and you can’t win them all but we will come back stronger at Monza. A big thanks to everyone on the team for trying to get me back out but the engine had had it. On to the next one.”

“I’ve never raced the car in the wet before so taking the start was interesting. To go from fourth to first on the first racing lap and pulling a decent lead on everyone I thought was mega. Changing to slicks was the hardest part and it was the hardest drive of my life. Up until the obvious, I thought I’d done a good job. The contact with the Porsche was unfortunate. I felt it was a clean move and with how light the contact was I think we have been harshly punished with this outcome, I just feel really bad for the team.”

“That was a tough race. Definitely my toughest couple of stints I’ve ever had in a race car – it had a bit of everything. Ultimately, we just didn’t have the pace in the dry which we need to look at, but Andrew had a brilliant first two hours to stay out of trouble and to bring the car into the pits for me in the position he did. But I just want to say a huge thanks to Jim McGuire who let us continue to race without him this weekend and giving us this opportunity. We missed him and this one’s for him!”

“Awesome, awesome result. A huge effort by the whole team. The car was good and I think it was one of the hardest races, the conditions and the format. I think I was in the lead when I brought the car in. I felt great in the car and we took a bit of a gamble with going onto slicks and it all worked. This is an awesome result for Jim as this is who it is for – we can’t wait to have him back in the car again.”

“What a race – fantastic result for Phil and Filipe. Alex, Job and Will were really unlucky with the safety car. Duncan and Andrew had a great race too, but Wayne, Rob and Tom had the worst luck today. I’m sure they will bounce back at Monza.”

“That was one of the hardest races I’ve ever had to watch as a team owner. It all seemed to be going wrong at one point, but that made the win in LMP2 and the second place in LMP3 so much sweeter. I feel sorry for the #32 car as they were unlucky with the safety car and I don’t know what to say about car #2. The positive thing for them to take away is that they are still leading the championship. Next for us is Le Mans – let’s see what we can do there.”