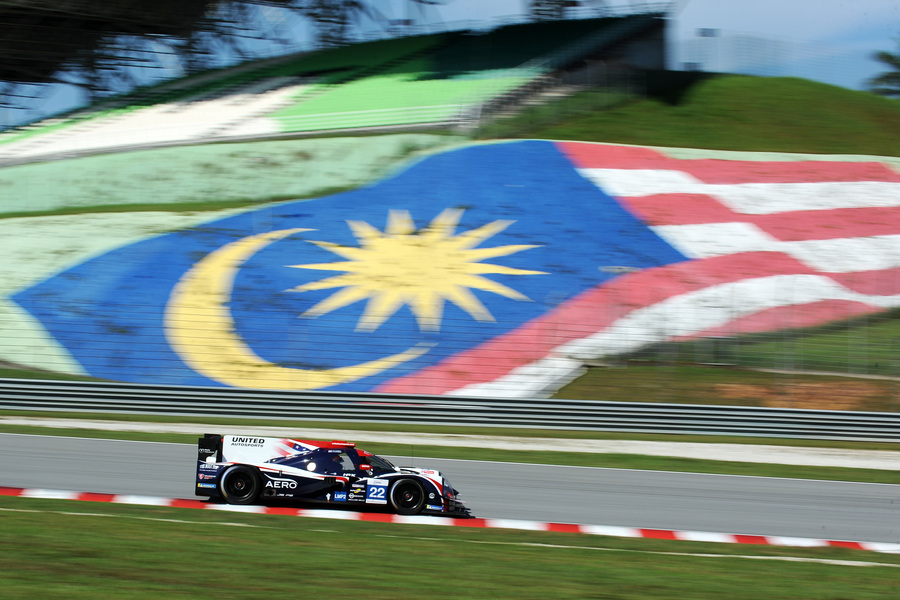 Phil Hanson and Paul Di Resta brilliantly earned themselves and United Autosports the overall Asian Le Mans Series title when the British duo placed their Ligier JS P2 Nissan second in the fourth and final round at Sepang today (24 Feb). A win in Thailand combined with second places in China and Japan saw them finish 11-points ahead in the title race to secure the Anglo-American team the title at its first attempt, a stunning performance that crucially also earns United a coveted automatic Le Mans 24 Hour race entry for this year.

Patrick Byrne (US)/Guy Cosmo (US)/Salih Yoluc (TUR), were set for a solid third place overall and a second LMP2 class win in Malaysia today but with 32mins, a gearbox issue caused the #23’s retirement and so cruelly missed out on the LMP2 Am title by 34 points having led this title race until the penultimate round and posting two class podiums – including one class win – plus an overall podium. In LMP3, #2 Wayne Boyd (GB)/Chris Buncombe (GB)/Garett Grist (CAN) earned United a 100% class podium finishing record in the four-race series – like the LMP2 #22 Ligier of Hanson/Di Resta. Third place gave #2 second place in the final standings – 17 points behind the winners – with the sister Ligier #3 of Matt Bell (GB)/Kay van Berlo (NED)/Jim McGuire (US) claiming fourth in the final table after finishing fifth in the 4Hrs of Sepang today staged in searing, unrelenting heat. United claimed an outright or class podium finish in all four races amassing a total of four overall or class wins.

With the ambient temperature once again above 30°C, #22 (HAN) started from the front-row for the third consecutive race, with #23 (BYN) going from second in Am class (P6 overall), the Ligier having been plague by a mysterious electrical issue on the opening day. #22 ran P2 in the opening laps but took the lead 14 minutes into the race when the pole-sitting #8 was adjudged to have jumped the start and was given a penalty. #23 ran second in Am class (P6 overall) despite also serving a drive-through for an indiscretion heading to the grid.

Hanson was back in #22 with 102 minutes remaining, Cosmo taking over #23 moments later, #22 remaining P2 – 22 seconds adrift of the race leader – #23 P4 overall and still ahead in the Am class before another Safety Car, lasting 13 minutes, with 90 minutes left on the clock. The race resumed with #22 P2 and #23 P3 overall and leading Am, the positions remaining constant until 32 minutes from the finish when #23, placed a comfortable P3 overall and a solid P1 in LMP2 Am, suffered gearbox problems and subsequent retirement. Hanson incurred a 20 second time penalty at his stop for an earlier pit-stop infringement while Di Resta, in the #22 for the final 14 minutes, took the chequered flag 103 seconds behind the winning #24.

#2 (GRI) set off from class pole for the second consecutive race while #3 (BER) began from the third row of the LMP3 grid, handicapped by a braking problem – causing McGuire to crash in FP2 – over the first two days of the event. In the opening laps, #2 & #3 ran 1-2 – the Dutchman making an exceptional start. 30 minutes in, #2 & #3 were P2 & P5 but #2 lost time with an extended first scheduled pit-stop for steering adjustments and lay P6, Buncombe now behind the wheel, with #3 P3 after the first stops, Bell 10 seconds off the class lead. #3 snatched the lead after the five minute Safety Car period on 90 minutes which cruelly cost #2 a lap due to its on-track positioning.

At the halfway mark #3 & #2 were placed P1 & P5, McGuire taking over the lead #3 on 100 minutes, a quick spin early in his stint dropping the American to P2, with Boyd now in the #2 minutes later in P6, all before the race’s second Safety Car period. McGuire incurred a drive through penalty for speeding in the pit-lane, #3 dropping to P3 while Boyd impressively brought #2 up into P3 with 50 minutes remaining at the expense of #3 which slipped to P4. Buncombe took over the #2 with van Berlo #3 in the closing stages, #2 spinning after contact when dicing for P3 with 22 minutes remaining – ultimately netting P3 (#2) & P5 (#3) respectively at the finish.

Phil Hanson
“Very happy to have achieved our goal of winning the championship and a Le Mans entry but disappointed in not doing it with a second consecutive race win. The start and opening phase of the race was really good for me and I pulled out a good lead, over 50 secs to #8 and almost 90secs to our #24 title rivals before, in my opinion, a relatively uncalled for need for a Safety Car destroyed our strategy. We picked up a pit penalty when a wheel nut rolled on the floor less than a metre during a tyre change and so after that we coasted home to the finish. I managed a good lap in qualifying having gambled on a car set-up for that time of the day and track conditions based on what we’d learned from Friday’s practice. ”

Paul Di Resta
“Four very different races, one win and three second places, means we’ve accomplished what we needed to do. We’ve won the title but also the series was about me helping to develop Phil as much as I could in preparation for ELMS, Le Mans and WEC during the year. He’s consistently produced excellent performances. Competing in this four-races series has definitely shortened the winter in some respects but on the other hand it feels it’s been a long season having begun in November. ”

Guy Cosmo
“Hugely disappointed but that’s racing sometimes. It’s been a great effort by all three drivers and United in what has been a challenging season. We overcame many hurdles and for much of this race were in the hunt for the title until the gearbox went without any warning. Qualifying was a little compromised as Patrick needed to complete a flying lap due to not logging the required number of minimum laps after we had an electronics issue on Friday. Otherwise I’d have had to start the race from the back of the grid. I went into qually having only done two flying laps then used just one set of tyres due to the time constraints.”

Patrick Byrne
“I made a good start. My stint was pretty flawless, we were right where we needed to be in terms of winning the Am title before the transmission went. Even these things can happen to the best team out there which is undoubtedly United Autosports. Hugely disappointing, especially having to deal with the ridiculous heat, but that’s life sometimes.”

Salih Yoluc
“I had much traffic in my stint and it was difficult to get into a rhythm which I managed to do and my second stint was much better and I was happy with that. The team plus Guy and Patrick did good jobs. It’s been a very good experience, I’ve enjoyed the series and racing the LMP2, but like everyone, I want more driving time in the car.”

Garett Grist
“I started and my stint was a little rough as the steering column was somehow touching the brake pedal which obviously cost me valuable time and was later rectified. I’ve really enjoyed the series, the tracks have been great. Fuji was the coolest while winning at Buriram was a great feeling. The competition has been very good and has been excellent practice through the winter months. ”

Chris Buncombe
“A better result could have been achieved but we were compromised with circumstances outside our control. It was frustrating to lose a couple of minutes having the steering rack repaired when I took over from Garett then in later my first stint, I lost a lap simply due to where the Safety Car picked up the field. I had some contact with Tony Wells attempting to get into P3 which I managed to do successfully and cleanly just before the chequered flag. It’s lovely to end the season on the podium, obviously it would have been great to win the title but runners-up after three podiums out of four races makes me pretty happy.”

Wayne Boyd
“I was happy with my stints today despite the intense heat. It wasn’t quite the result we needed to get the championship title but overall I believe we all did a good job over the four races. I made a small mistake at the last corner on my last lap of qualifying – unsure if it cost me much time. Finished the session P2 but ultimately inherited pole.”

“It’s a mega track but I just made some mistakes today which was very annoying as it cost us a podium. But it’s been a great experience, a high level of competition racing at the top tracks in Asia. Awesome.”

Matt Bell
“It’s a shame not to have finished higher in the final standings. I took my opportunity to snatch the class lead after the re-start following the first Safety Car. Traffic was particularly difficult at times which prevented me from building much of a lead before handing over to Jim.”

Kay van Berlo
“It’s been a tough event – especially concerning the heat, it’s been unbelievable. Started P5, was P2 after the first lap, and quite happy with my first stint in general. In the closing stages when I was back in the car, I was pushing like hell on double-stinted tyres but my pace was good and only missed out on P4 by 1.2secs at the finish. Qualifying was really hard. We’d struggled with a set-up issue, particularly around the braking. That caused Jim’s accident in FP2 and went on to affect me in qually. To begin with it was okay but after a few laps the same problem appeared again.”

Zak Brown, Team Owner and Chairman, United Autosports:
“Massive congratulations to Phil & Paul who secured the team a Le Mans entry which is magnificent news. They’ve had an awesome season and I’m proud as to what they have accomplished. Commiserations to the #23 crew who cruelly missed out on the LMP2 Am championship – it would have been nice to have got a second Le Mans entry at this stage which is what we’re still eagerly hoping for. As for LMP3, so near yet so far. All our guys raced very hard but we just missed out on the class championship silverware.”

Richard Dean, Team Owner and Managing Director, United Autosports:
“We’ve achieved what we set out to do in our first Asian LMS season and that was to win races in both classes and claim at least one automatic Le Mans entry. Our aim was also for Phil to get him well-prepared for the forthcoming ELMS and then WEC seasons this year. #22 had it all under control in terms of the race win before the first Safety Car appeared and wiped out our massive lead over the #24. For three-quarters of the race, #23 was winning the championship and earning us a second Le Mans entry. Those guys haven’t caught much of a break in the last two races particularly and I feel bad for them. LMP3 was full of incidents, some of their own making, but Garett, Wayne and Chris particularly shone today – the latter performing very well considering his lack of sports-prototype experience. The series has been perfect preparation for us heading into ELMS.”