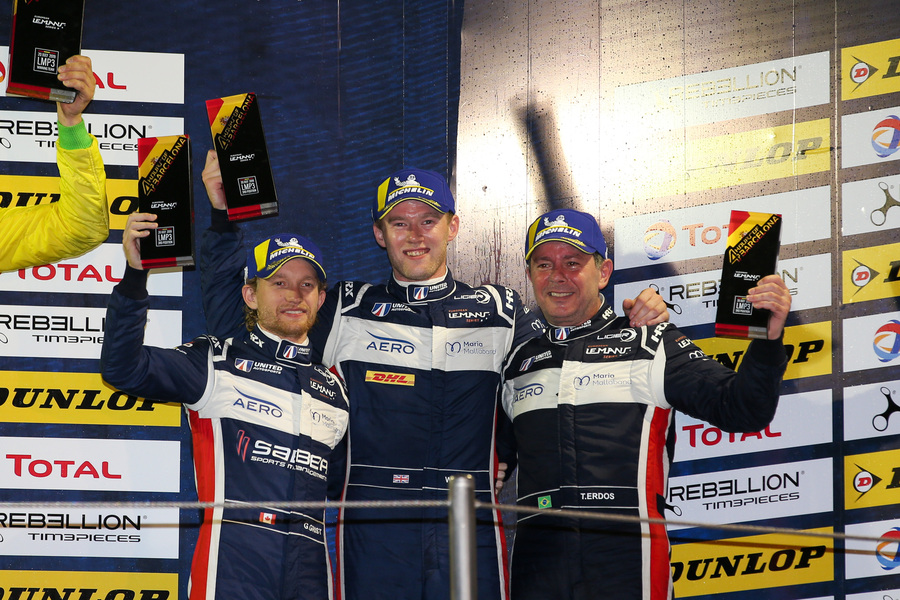 United Autosports celebrated its 300th race in great style when Garett Grist/Tommy Erdos/Wayne Boyd recorded the Anglo-American team’s 154th podium finish in the team’s 10-year history in Spain today. Competing in the third round of the European Le Mans Series, Grist/Erdos/Boyd scored a well-deserved LMP3 third place at the Circuit de Barcelona-Catalunya, the four-hour race run in the evening for the very first time in the championship’s history.

#2 Grist/Erdos/Boyd and the sister #3 Ligier of Mike Guasch/Christian England both led LMP3 in the final 30 minutes, #3 having to ultimately settle for P5. In LMP2, #22 (Filipe Albuquerque/Phil Hanson) and #32 (Alex Brundle/Ryan Cullen/Will Owen) recorded seventh and eighth positions after dogged drives.

United remain trackside to participate in the official FIA World Endurance Championship Prologue (23-24 Jul) next week. Meanwhile, the next round of the six-race ELMS is held on home ground for the Leeds-based outfit, at Silverstone, on 31 Aug.

#32 (Cullen) & #22 (Hanson) began P12 & P13, Cullen moving up to 8th on the opening lap while Hanson dropped to 14th after contact but incurred damage after 16 minutes necessitating a front nose change at an earlier than scheduled pit-stop when 11th with 26 minutes gone. #22 resumed 16th – a Full Course Yellow not helping its recovery. #32 (Cullen) ran 9th at one-quarter distance with Hanson, at times the fastest car on track, 13th.

Albuquerque took over the 11th placed #22 after 80 minutes while Owen was onboard the #32, pitting under FCY conditions moments later, and lay 6th, the American suffering a 15 seconds penalty for an earlier on-track infringement at his next stop, dropping the #32 to 11th one place behind #22 approaching the halfway mark. Hanson was back in the #22 for the final hour after good stints from Albuquerque while Brundle took over from Owen, #32 dropping behind #22 during the pit-stops taken under FCY placed P8 & P9 – the pair each moving up a place by the finish and the best-placed Ligiers.

#2 (Grist) and #3 (England) started P6, Boyd equalling his best qualifying position of the season, and P13 respectively. #3 lay 9th after 30 minutes before an off cost England a place and an early pit-stop while #2 (Grist) recovered from an opening spin which dropped him to 15th and the back of the LMP3 field. With 60 minutes on the clock, #2 lay 10th but yet to pit, one place ahead of #3.

#3, on a different pit-stop sequence to the majority in class, led approaching the 90 minutes mark with Boyd, having taken over #2, 7th. Guasch took over #3 at mid-distance after a stellar drive by England with #3 4thwhile #2 (Boyd) headed the field himself early in the third hour before pitting to Erdos. #3 (Guasch) was back into the lead with 90 minutes remaining and led entering the final hour with #2 (Erdos) 3rd, but Guasch spun out of the lead with 20 minutes remaining, handing the lead to Erdos, #3 resuming P3. But almost immediately, #2 lost the lead and #3 slipped back another place, the United pair taking the chequered flag in P3 (#2) – the car’s second consecutive podium – and P5 (#3) respectively, Mike dropping a place on the final lap when he was punted off the track by the car that took fourth place.

#2 and #3 lie fourth and seventh in the Team’s standings.

Phil Hanson
“The start was farcical and ruined our race. Rules state that you can’t go outside your lane before the start of the line so I obeyed it, unlike most of the grid, so I lost out on the initial start. The car in front of me didn’t get away as quickly and having lost my pace as I came back through really quickly and cleanly and then leaving as much room as I thought I possibly could in T10, I was hit. That car, and three others, gained which meant I had to come back through again. As I did, one of the cars went off at T3 and decided to re-join the track in front of me at T4 and just turn in to me. I tried to back out but by that point I was still half a car length alongside and we touched. The collision took off one of the dive planes and by the time we fixed the front end with a pit-stop, tyre damage had already been done. I pushed as hard as I could and got some good pace but the tyres were shot. I was back in for the final two stints which I enjoyed setting some good lap times.”

“My stint was okay. The car was definitely better from qualifying after managing to fix the balance. I saved the tyres from the beginning of my stint because I knew I was going for a double on them. I think we made some ground on the standings. We closed down and fought with our sister car which is always a healthy fight. I had fun after the Safety Car periods with and all the traffic. Great fun, nice battles with no contacts at all.”

“We came out in a pretty good position having boxed under green then unfortunately the FCY came out immediately and everybody else was able to box under yellow, which is about a minute deficit. So we dropped way back down field. I came out in a race with Carlin and the sister car up ahead but they were a bit too far away to catch and anyway friendly fire is not exactly the aim and took 8th. It is not where we want to be but I think the forces of FCY conspired against us this time.”

“The start was good and I managed to get a few positions. I settled into the race but it was really difficult to overtake. Did some good moves and got up to around P8. We lost some positions on the track at the second stop but it benefitted me and the team in the long run and ended up coming back in at P6. I am very happy with my performance.”

“I just went out there and drove and didn’t really keep track on what was going on around me. The car was pretty good. I just pushed and drove and it seemed like it was okay. It wasn’t easy out there. I really struggled with the heat at the beginning and I have done some hot races recently and I was alright. I felt nauseous during the Safety Car period which I have never had before.”

“The opening lap was a complete disaster being forced off the track and into the gravel/sand traps in two separate incidents. Two cars ahead of me got together and I had to go off on the outside of T3 to avoid them. Then into T9, I went to pass one of the GT Porsches and when I pulled out to pass him he just swerved towards me causing me to lock-up and spin into the gravel. Both incidents were in avoidance but didn’t have contact in either but it put me at the back of the field. It was a rough start.”

“Our car had a very difficult start to the race. Garett had to avoid incidents ahead of him and lost a lot of time. At that point if I’d been told we would get a podium I wouldn’t have believed it! I think once again the team showed their strength and resilience and never gave up and kept pushing. It was hard conditions for everybody, the drivers and the pit crew, but to fight back from the back and get a podium in the end, I think is fantastic. I’m very happy.”

“I enjoyed my stint. I quite like recovering and trying to get back up through the field and being on different strategies, it’s always very interesting.  The pace of the car was really good and it was a case of managing the traffic. We got back up into the lead, obviously on a different strategy, but from where we were and to get back up into the mix of things was really good.”

“I took over from Christian who’d done a great job. I went out and was in the lead for a long time but the last half hour was really tough. I’d driven in the earlier Michelin Le Mans Cup race and that combined to lack of water, I went light headed. Then I got hit in the last corners on the last lap so lost a place. The best part for me was the fact I was running with the top guys and had a good pace with them when I was fresh.”

“That was a tough two hours in the car. I don’t think I have driven in conditions quite like that. A couple of misdemeanours in traffic when two LMP2 cars dived up the inside and once you get on the marbles there is just no grip so a couple of times I went wide into the gravel and thought I had blown it. We dropped unlucky with a FCY which put us a little out of sequence. I thought my pace was pretty average to be fair but obviously it was pretty decent. I put in a lot of hard work.”

Zak Brown, Team Owner and Chairman, United Autosports:
“Following on from our Michelin Le Mans Cup podium, I’m delighted to add another ELMS top-three to our CV. Both LMP3 cars had spells in the lead and were on course for top finishes. LMP2 was tough, as we’d expected, but again the drivers ran mistake-free and brought the cars home. Overall it’s been a good, solid weekend.”

Richard Dean, Team Owner and Managing Director, United Autosports:
“It’s always difficult to recover from a poor qualifying and that’s the story of LMP2. There is not much you can do to improve in the early stages even though you are quick, you get stuck behind a car that is really difficult to overtake. All five drivers did well with Phil’s closing stint to close in on Pla, a seasoned pro in an ORECA, was a very good performance. #32 was also a bit unlucky with Safety Cars that never seem to fall for them, but endurance racing can be like that. In LMP3, both cars made good recoveries. Credit to the guys on the pit wall that seized every moment and opportunity to pull them from a lap back to lead their class. It’s a shame both cars weren’t on the podium because they and the team deserved to be.”