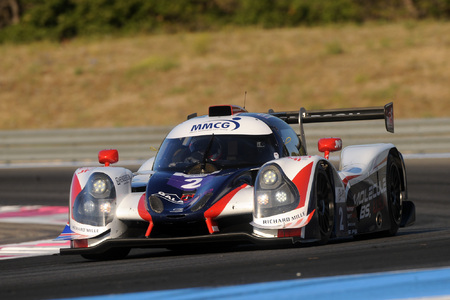 United Autosports will start the penultimate round of the European Le Mans Series aiming to keep its 100% record of podium finishes intact in the fifth race of the season on Sunday (25 Sep). Three wins (Silverstone/Imola/Red Bull Ring) plus a third place (Paul Ricard) means the #2 Ligier of Alex Brundle/Christian England/Mike Guasch could mathematically claim the LMP3 title in the 4 Hours of Spa-Francorchamps.

The #2 Ligier drivers will start qualifying on Saturday (24 Sep) with a 30-point lead with a maximum of 52 points up for grabs in the final two races. The Anglo-American team’s other podium, a second place (Silverstone) courtesy of Matt Bell/Wayne Boyd/Mark Patterson, has earned United Autosports a 30 point lead in the LMP3 Teams’ standings. While the #2 Ligier has enjoyed a relatively untroubled run to the podium in the previous four races, the #3 Ligier has suffered appalling fortune. An open door (Silverstone) requiring an unscheduled pit-stop, a puncture in practice severely restricting on-track time then a drive through penalty (Imola), a puncture (Red Bull Ring) and an engine change causing a back of the grid start plus a two minute “stop-go” penalty (Paul Ricard) has blighted their season despite a class pole position at Imola.

The demanding 4.35-mile Spa-Francorchamps track, fast and sweeping with many elevation changes and invariably made even more of a challenge due to changeable weather conditions that affect the Ardennes region, is not a new venue for United Autosports. Four 24 hour race appearances (2010-13), plus British GT and SuperCar Challenge events, all in the GT3 category, have resulted in multiple top-six finishes. Practice begins on Friday afternoon, qualifying on Saturday with the four hour race scheduled to start at 2pm (local) on Sunday.

“Spa is one of the highest profile circuits we will visit this year in the ELMS so I am very much looking forward to racing there. Everyone always looks towards Eau Rouge first for the excitement of the venue and it is a unique challenge but the whole circuit is a really interesting exercise in both driving and engineering terms with plenty of fast corners to have a go at, along with some technical sections. Coming into the race with a 30 point lead in the series and 52 points on the table we will be looking to give the best race performance possible and then see where we end up after the race’s end. In my experience there is no point in targeting a specific result but we will certainly be aiming to do well enough to give ourselves a very comfortable margin going into the final round in Estoril. United Autosports and my team mates are certain to give another flawless performance so I’ll be working hard all weekend to give them the best performance possible from my side, to come away with some more silverware from this famous circuit! I’ve raced at Spa on many occasions. First time was back in 2008, competing in Formula Palmer Audi – a race my Dad also did actually – while the most recent was in the 2013 FIA World Endurance Championship in which I finished second in LMP2 and fourth overall.”

“Spa will be such an important race for the #2 car as we can realistically wrap-up the championship. Our aim will be, as always, to win the race but we are aware we only need to finish ahead of the #19 and #9 cars to have an unassailable lead heading to Estoril. We’ll keep calm, focused and concentrate on delivering another top result. I have never raced at Spa but we had a successful test there. It’s a long lap and has a good mixture of high and low speed corners so set-up will be crucial to gaining a good balance. Eau Rouge in particular will be a rewarding challenge. The weather can always play a key role at Spa but we hope we’ll get nice settled weather.”

“It’s been a few years since I raced Spa but we had a successful test there last month and I think we are well prepared for the race weekend. I am looking forward to the race. I first raced at the great Spa track in the 2011 Dutch Supercar Championship driving a Mosler in pouring rain. Martin Short and I finished second on my Spa debut then I did a British GT race that year with United.”

“Heading into Spa, we’re just looking to break the run of bad luck! We’ve been quick everywhere this year but ‘Lady Luck’ seems to have deserted us! Our prep for this race has been good, we tested there and looked very strong once again. Driving the Ligier around Spa is an amazing experience, it really suits the high-speed, flowing nature of the circuit so I can’t wait for the race. Any shot at the championship is gone for us now, so we’re targeting a clean couple of races to end the year with two podiums to put the smiles back on everyone’s faces. Spa is one of the greatest tracks in the world. I first raced there in 2011 and it was the scene of my maiden 24 hour race. I raced there last year in British GT.”

“Spa is definitely the race I’ve been looking forward to the most this year. It marks only the second track, along with Silverstone, that I go to this year with previous track knowledge. I’ve raced there twice, in 2008 and ‘09, winning two British Formula Ford 1600 races. It’s a track that you always enjoy driving no matter the conditions or pace, Eau Rouge has to be up there with some of the best corners in the world. We seem to say this before every race but I really hope our luck changes and we can have a good, clean, drama free race so we can show our true pace and fight for a win. Not only would it be great for us drivers but also to repay the whole team for all the effort they’ve put in this year.”

“Spa stands at the top of my list of best five race tracks in the world, no question. Incomparable and complex changing weather conditions coupled with some of the most demanding turns in all of racing. I’ve previously raced GT3, in ‘sprint’ and 24 Hour races, plus prototypes at Spa and enjoyed them all. The season has been really challenging and frustrating so far with a run of back to back issues, 95% just plain bad luck. So I’m hoping for an uneventful race at Spa where we can show our collective speed and to try to stand tall on the podium on Sunday evening.”

“I’m looking forward to Spa. It’s a great race track and I can’t wait to see what the team can do there. They’ve done a great job all year, getting us into the position we are in championship wise, I just hope that continues for the remaining races.”

“Heading to Spa as championship leaders is a great position to be in with only two rounds remaining. We are focussing, as ever, on getting the best result possible with both cars. I really hope car 3 has some better luck as Spa. They have the pace to be on the podium at every round like car 2, but luck just hasn’t gone their way. I love Spa too, it’s a long, technical track and up there among one of my favourites. I can’t wait to see our Ligier P3 cars racing round there.”