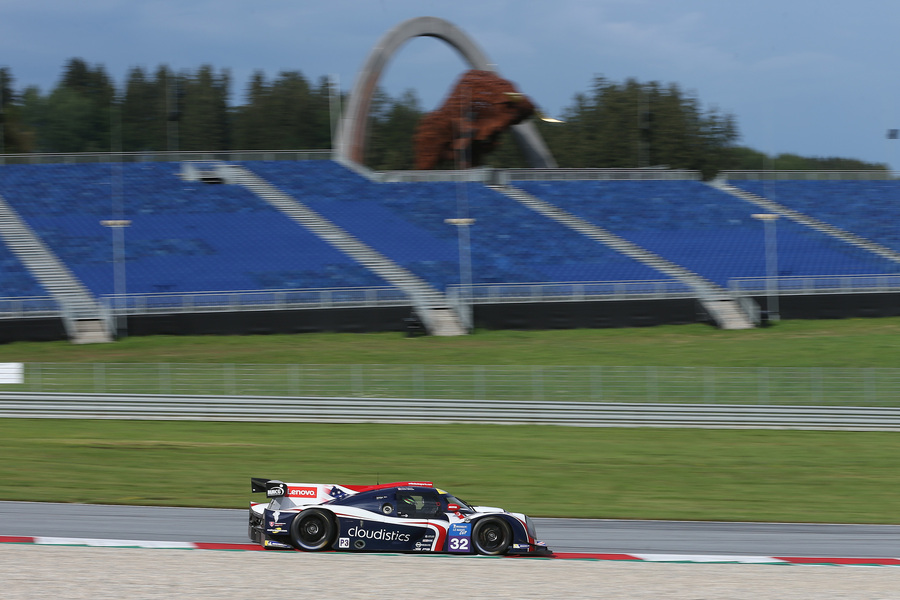 United’s trio started the fourth round from ninth (#32), 17th (#22) and 18th (#23) – Husain and McGuire notably achieving their best qualifying positions of the season earlier in the day. The race ran for nine minutes at the start before the green light from behind the Safety Car after a heavy rain storm with all cars in the 26-car field starting on wet weather tyres. After 30 minutes and with the 2.68-mile track drying rapidly, the #32, #23 and #22 were placed 16th, 17th and 18th.

Meins, having battled his way impressively into 12th at one point, spun off at Turn 4 moments before he was due to make his compulsory pit-stop, causing a Full Course Yellow as his undamaged Ligier was retrieved with almost one-hour on the clock – England resuming 18th in class, two-laps down. Husain handed the 14th placed #32 over to Braun with McGuire pitting the #22 in 17th to Bell – the pair resuming 11th and 13th – everyone now on “slick” dry weather tyres. With 30 minutes remaining, the #32 and #22 lay eighth and 10th with England setting times comparable to not only his team-mates but the front-runners too. Braun diced hard for seventh place in the closing stages but ultimately missed out by one-second at the chequered flag while Bell took ninth having claimed the place with 21 minutes to go. The penultimate round of the series is staged at Spa-Francorchamps in Belgium on 22 September.

“A top-10 finish – a good take away! This was my first ever start in the rain and it was a case of trying to stay between the white lines which I managed to do. Visibility was terrible but the rain tyres were exceptional – they held up very well as the track dried. It was fun to race in the drying conditions.”

“I’d sum my stint up as ‘challenging’. We elected to stay with the high downforce set-up so was a sitting duck on the straights. Settled in to my own pace and was catching Colin [Braun] after despatching a Norma that tangled with a Ferrari. Pushed right to the end and it was nice to get inside the top-10.”

“Qualifying was disappointing so had work to do in the race. I’m quite comfortable racing in the wet and especially when the track began to dry, I think my historic racing experience helped me. The car was moving around a lot but I made up places, my times were okay and everything was going really well until the back end came around as I accelerated out of Turn 4 – just as I’d done the previous lap – and went backwards in to the gravel trap.”

“Richard drove a blinding stint in the wet, getting faster and faster with every lap as the conditions changed but unfortunately had an issue right at the end of his stint. The car was pretty good for me, my times were okay, and it’s just a case of what might have been today for the #23.”

“It was an exciting start to the race with the wet conditions making it very challenging and it was hard to see at times. The transition from wet to dry was a good experience for me. I’d never been here before and Wednesday was my first time on track but it’s been great fun especially with an eighth place finish.”

“We had to do a push back as the pit-lane was pretty congested when Naj pitted which put us back a bit after a good run by him in tough conditions. I enjoyed my stint and had loads of fun passing cars. My pace was decent but just couldn’t get seventh – every time I got close I’d lose the front end.”

“Decent results with good performances from all six drivers but a little frustrated as a top-six was achievable. Richard adapted really well as the track started drying – it was very unfortunate he had an off on the lap he was due to hand the car over to Christian. Our other ‘AMs’ also did well, Naj having his first race here and never having driven in the wet, while Jim was superb in qualifying. Colin, Matt and Christian each produced the drives I expected of them – consistently fast and clean.”