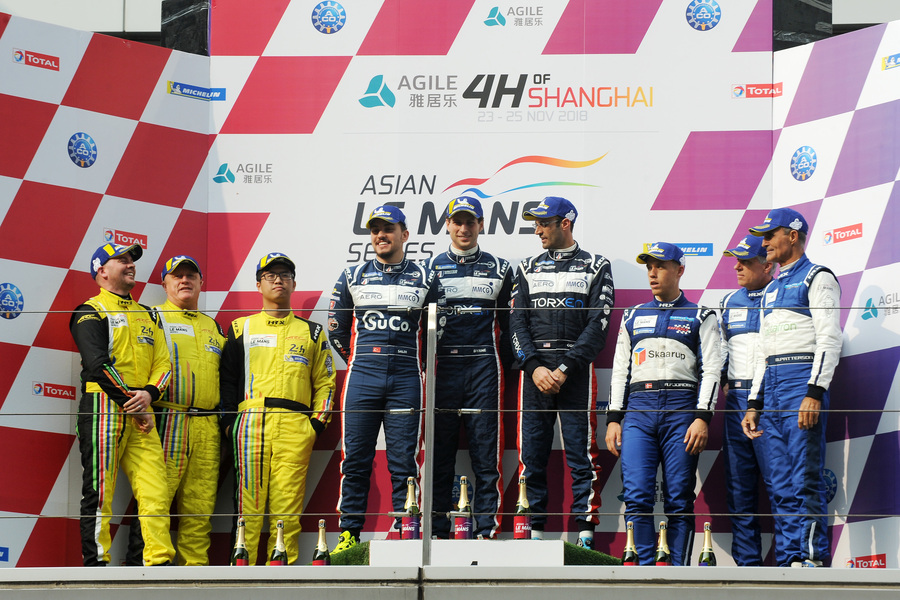 The day began under a cloud of fog, with doubt hanging over the early start time of 09:30. Luckily, the fog lifted and the sun came out just as the pits opened and teams made their way to the grid.

Guy Cosmo, Patrick Byrne and Salih Yoluc stood on the podium twice as they finished third overall and first in the LMP2 Pro Am class after suffering from a puncture as Guy just began his stint half way through the race. Patrick started the race from fifth in the #23 Ligier JS P2 and made a good start to be running third for the early part of the race. Salih took over into the second hour and ran second overall for a large part of his drive, pitting to Guy who held his position until the puncture. Guy held on until the end, bringing the Ligier home for the class win.

Phil Hanson and Paul Di Resta finished second after battling for the win for the majority of the race. Phil qualified the #22 Ligier JS P2 on Saturday, putting the car on the second row of the grid, in third place. Phil had a difficult start to the race after contact with another car knocked him down the order. Ultimately, he fought back through the field and pitted, handing the car over to Paul in the lead of the race. Unfortunately, both safety car periods affected the team’s strategy meaning they had to settle for second place.

In the LMP3 team, Garett Grist, Wayne Boyd and Chris Buncombe finished second in the #2 Ligier JS P3, completing United Autosports’ podium line up. Garett started the race, after Wayne’s qualifying lap put them third on the grid. A good start for Garett saw him maintain his position – both LMP3 cars running at the front of the field for the opening stint. At the first pit stop, Garett handed the car over to Wayne, who moved up into the lead, following a battle with Colin Noble in the Nielsen Racing Ligier. Chris took over the #2 Ligier for his first race stint in an LMP3 car, but a badly timed safety car caused them to drop a place as Chris completed his stint.

Kay van Berlo was making his Asian Le Mans Series and United Autosports debut this weekend, racing alongside team regulars Matt Bell and Jim McGuire. Matt qualified the #3 Ligier JS P3 fourth on Saturday, starting the race alongside team mate Garett Grist. Matt made a great start and was leading the LMP3 class, while also running in the top three during the majority of his stint. He handed the car over to Jim, who had been suffering from food poisoning overnight, for the middle stint. Unfortunately, the safety car also caught them out, dropping them a lap down during Jim’s stint. Kay got in the Ligier for his first laps as a United driver, and did his best to recover the lost time, but ultimately finished seventh after showing great speed in his first Asian race.

The series now moves onto Fuji in Japan in two weeks, with the race being held on Sunday 9th December.

“The start of the race was dramatic. Another car made contact with me on the start which knocked me down the order. I had to come back through the field, which I did and I was in a good position by the time the first safety car came out. I made a slight error on one of the safety car restarts which lost us time, but on the whole, I’m happy with my performance and pleased with a podium finish.”

“This weekend has been quite mixed. We put a lot of the pressure on Phil, letting him qualify and take some of the heat in preparation for next year. The incident at turn one put us back and took us out of sync a little bit. That said, he showed a mature drive from there and was very quick. I think to come away with a second place is disappointing, because I think we could have won, but we are very lucky as well as I went aggressive to try and put pressure on the car that eventually won. But I think we go into Fuji in a strong position."

“I’m feeling pretty good right now. It was a great effort by the whole team. We had a bit of an issue when the weekend began and we were scratching our heads. But the strength of United Autosports really shone, because they really dug deep to find the issue with the car. To come away with a win in our class and third overall is exactly what we were hoping for. It’s encouraging to say we will be going into the remainder of the championship looking stronger.”

“What a fantastic result – a win in class and third overall. You’ve got to love that! I’m really happy with the team. We were tight on fuel but everyone did a fantastic job and it’s no surprise United did that. It’s also no surprise that my team mates are driving the best they can too. Bring on Fuji.”

“At the beginning of the race we had a mixed start. The race was interesting with the safety cars. We managed our pace well and we got a podium overall too, which I think it the most impressive part of the result. I’m really looking forward to Fuji, I love the track and raced there only a few months ago.”

“I had really good pace in my first stint and passed a couple of cars at the start. I was running second for most of my stint – I think it was one of the best stints I’ve driven. I felt really comfortable and we made a lot of improvements as the weekend went on. I enjoyed the race."

“It’s always nice to spray the champagne and come away with a trophy, but on a personal level I feel a little disappointed. I think the win was there for our car. For me, it’s been a steep learning curve trying to get my head around driving an LMP3 car. The team did an awesome job on the car and the strategy was great. Both Garett and Wayne did fantastic stints putting the car at the sharp end, so it was nice to take away a trophy, but I do feel the win was there for us today.”

“We’ve had a really good start to the championship and we bagged some good points to start off the season. We have a couple of things to work on but I think we can really push for the win at the next round. We have some really good pace, but we need to put a few things together to make it happen. The two safety cars didn’t play into our hands at all today. I think my pace was really strong, I managed to get into the lead and stretch that out over the rest of the field, which is all really positive. Chris and Garett did a great job too – it’s the first time Chris has been in an LMP3 car and at this track so I think second is a great result but we can definitely work on a few things for the next round.”

“My first race in Asia was pretty challenging – I think one of the top ten things in life to do is never drive a race with food poisoning, but luckily I survived and didn’t crash the car. It was a tough race today, but I’m looking forward to Fuji.”

“The start was entertaining. Everyone just seemed to go mental and I just slipped through and into the lead. We held the lead for a decent portion of the race, but ultimately we were lacking pace this weekend. We got unlucky with the safety car and lost a lap, so when Jim got in there was nothing we could do. At that point you’re out the race as you can’t recover it given the rules in this series. I think that’s the most disappointing thing as it’s something you’re not in control of. But I’m looking forward to Fuji and hoping for a good result.”

“It was nice to be racing with United Autosports for the first time. It wasn’t the result we hoped for in the end. I enjoyed my stint, I was in for quite a long time and I really enjoyed that. We are fighting for podiums here so this result isn’t exactly what we want. I’m looking forward to the next race with United though.”

“I think we’ve had a good opening weekend in the Asian Le Mans Series. Three podiums is a good result and we have shown with all four of our cars that we have the pace to win.”

“It’s fantastic to win with Guy, Patrick and Salih and even better that they were on the podium overall. It was a difficult start to the week for them but they were really professional and patient and we worked our way through a couple of things and got them a car that they were capable of doing what they did in. Disappointed that we led for such a long time in both LMP3 and LMP2 and ended up second in both those, but it’s not a bad start.”