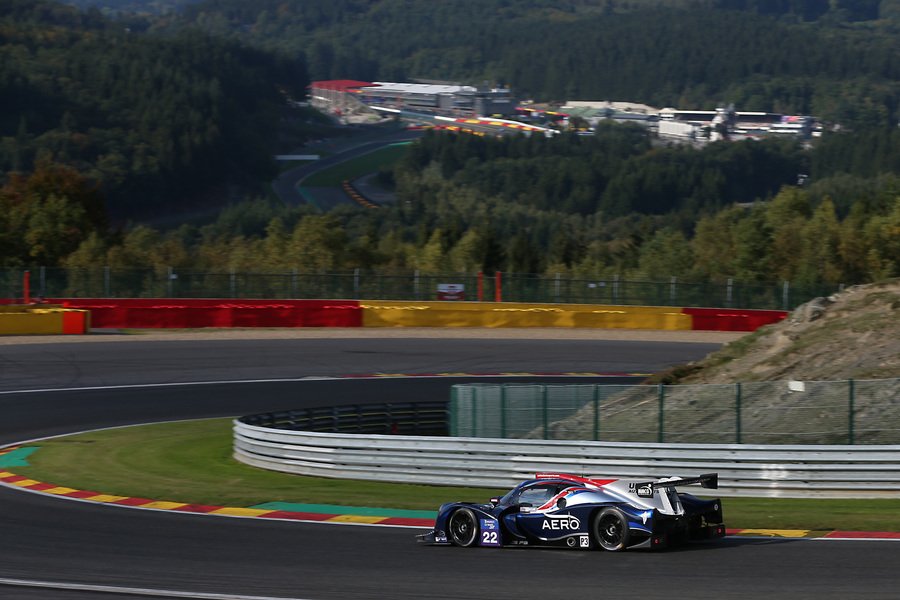 United Autosports claimed sixth position in the penultimate Michelin Le Mans Cup race of the season in Belgium today (23 Sep). Matt Bell (GB) and Jim McGuire (GB) combined to score their best finish of the season in their Ligier JS P3 while the sister car of Shaun Lynn (GB) and Richard Meins (GB) retired at three-quarter distance as a result of clutch damage after a spin.

Both United Ligiers qualified in the top-10 for the first time this season, McGuire and Lynn clocking the seventh and ninth fastest times around the 4.352 Spa-Francorchamps circuit. Lynn made a storming start in bright sunshine and had the #23 Ligier as high as fourth before slipping back to eighth after a spin, two places ahead of McGuire who was up against the more experienced Silver graded drivers. The race, run unusually on a dry track throughout without a hint of rain, settled down with the United Ligiers running seventh (#23) and 10th (#22). McGuire pitted to Bell with 62 minutes remaining while Meins took over from Lynn during the 10 minutes compulsory pit-stop cycle window regulated to occur between 55-65 minutes.

Bell, one of the quickest drivers on track, put the #22 ahead of the sister #23 with 33mins to run just before 10th placed Meins stopped on track at La Source having moments before spun exiting the last corner. Matt moved up to sixth with 10 minutes left to earn United its eighth top-10 Michelin Le Mans Cup race result of the season. The final round of the MLMC is held at Portimão on the Algarve in Portugal on 21 October.

“I pushed as hard as I could from the moment I got in the car, moving up from 10th to sixth. The car was great for me. I’m very happy with Jim’s progression during the season – his qualifying today was particularly impressive.”

“Overall it was a good day in the office. I was very pleased with qualifying. The Ligier was fantastic after United found a great set-up. My opening stint in the race though was challenging due to a slow puncture so it was a case of keeping the car on track and between the white lines."

“Qualifying was really disappointing. I didn’t make enough space for myself in relation to the car ahead which then compromised my lap times but then in the race, I got my act together and immediately made up places before making a mistake which caused a spin. But I enjoyed the race and reaching as high as fourth near the start.”

“It was difficult race. I struggled early on after taking over from Shaun which was just down to lack of driving time over the past couple of days but gradually it came together. Unfortunately, I then caused a malfunction with the clutch when getting the car turned around after a small spin. My mistake – I now know not to do that!”

“Another top-six for United! Jim posted the #22 Ligier’s best qualifying position of the season – he improves with every race. Matt was his usual reliable self, muscling his way up the leaderboard to a season best sixth. Shaun [Lynn] was awesome in the opening laps while Richard [Meins] clocked consistently good laps once in his rhythm before retiring.”

“Qualifying for the Le Mans Cup team was great and it’s fantastic to see them all progressing with the Ligier each round. Shaun had a great start making it up to fourth and was unlucky to then spin and then drop a few places. Jim is getting more comfortable with the car each round and a slow puncture it seems is what made it tricky for him in his stint. Matt did what he always does and brought the car home safely for another top-six finish. Sadly Richard spun and didn’t finish the race but we will head to the final round at Portimao with the aim of a top-five finish and maybe even a podium!”