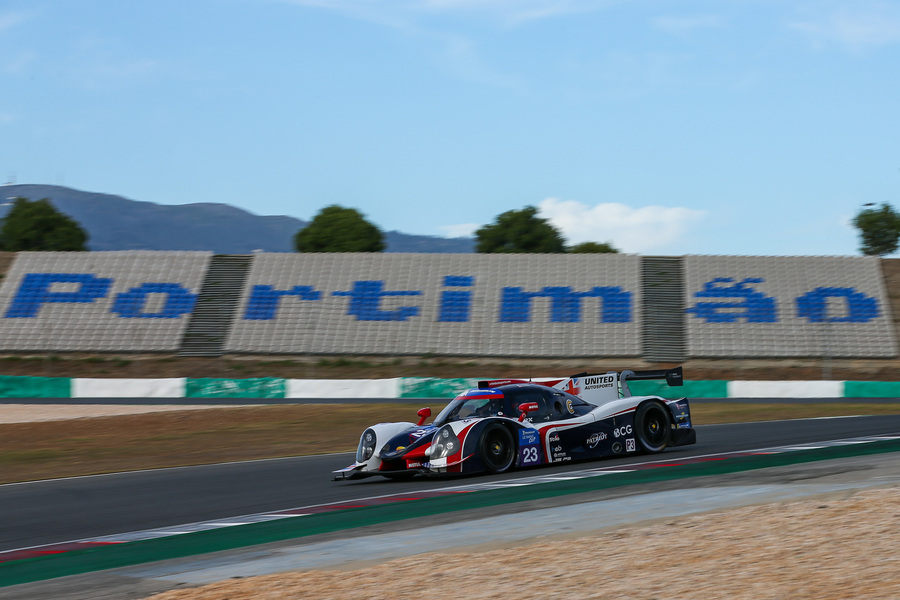 United Autosports’s 2019 Michelin Le Mans Cup campaign came to a close today with eighth (#23) and 10th (#22) place finishes at Portimao in the season finale. Rob Hodes (#23) and Jim McGuire (#22) recovered from early setbacks in the first half of the 120-minute race, handing over their Ligier JS P3s to their co-drivers Garett Grist and Matt Bell in positions to fight for top-10 finishes.

In the end, further progress on the challenging Algarve circuit from both Grist and Bell saw both of United’s Ligier’s finish the season on a high, in what was a drama-filled final race for the hotly-contested European championship.

The start to the two-hour encounter was frantic. Rob Hodes in the #23 enjoyed a strong run through the opening sequence of corners, climbing from 14th to 10th. However, he would quickly fall to 25th place overall later in the lap after a spin at the Turn 6 hairpin which sent him to the back. Meanwhile, McGuire in the #22 was able to have a clean opening lap but dropped from 15th to 17th in class.

The fight back through the field started from there, with McGuire climbing to 16th in class by Lap 3 while Hodes slalomed his way through the GT3 pack to 20th overall. The pair then battled for position, with Hodes finding a way past McGuire in the sister car to put the #23 19th in the running order and 16th in LMP3 after 15 minutes of racing. Both drivers then went on to make further progress before the round of pit stops, Hodes handing the #23 over to Garett Grist up to 12th in class with Matt Bell taking over from McGuire up to 14th.

Quick pit work meant more places were also gained in the pit stops. Grist (#23) rejoined the race 11th ahead of Bell (#22) in 12th.  Both drivers set fast and consistent times in the opening laps of their stints and moved up to ninth (#23) and 10th (#22) overall with just over 30 minutes remaining. This charge up the order came after they reeled in and passed the car directly ahead and benefitted from a rival further up the road making an unscheduled stop. In the closing laps Grist was able to make up one more position and secure eighth while Bell was forced to defend his place in a multi-car battle and eventually crossed the line 10th.

“It was a good conservative first stint, that was the strategy. I had a clean run. There wasn’t a whole lot of grip, but I just stayed in there and handed over a clean car to Matt and we ended up top 10, I’m happy with that. It’s been a great season, we’ve been much more competitive, but so has the entire field. Next year we hope to come back and be better matched up.”

“It was a much busier stint for me than I thought it was going to be. Jim did a good job, I think after the start at Spa the aim was to get through the first lap here, which he did. He got past the GT traffic in his stint and gave it to me. I had to get my head down. I didn’t have the car under me that I wanted, but I was still able to battle cars ahead and finish in the top 10. It was good close racing. For me, these seasons I tend to focus on Jim and his progress. We’ve had the best season together ever, we’ve been fast everywhere we have gone and he’s had some cracking drives. Lots of positives ahead of next year.”

“It was a really good start, I picked up a few places, but I locked up the brakes going into the hairpin, which was unfortunate. When I got back on track my pace was really good, I got passed a lot of people, and had a lot of fun. Eighth place isn’t exciting but I think we could have had fourth today had I not made that error. Now I’m looking forward to next year. I’ve loved my first season, all these new tracks, it’s been a terrific experience. I’m not entirely satisfied with my performance but I can build on that. A big thank you to everyone at United Autosports, they have been fantastic.”

“I made it up to eighth, not a bad stint after struggling with oversteer all weekend. It was a straightforward stint, picking my way through the field. This season we’ve had highs and lows, but I think Rob did a great in his first season racing on new tracks in multi-class races. There was a lot to learn but hopefully he will build on what he’s learned this year.”

“We have had a good year in the Le Mans Cup this year. There have been some promising results but it is a shame we couldn’t visit the podium more often. I’m looking forward to another season next year.”

“It was good for our Le Mans Cup drivers to finish the season with top-10 finishes today. We certainly had the pace with both cars to finish higher up the order, but in a race as drama-filled as that sometimes you just have to run your own race and see where you finish. It’s been another enjoyable Michelin Le Mans Cup season for the team, the level of competitiveness has certainly risen once again. We look forward to returning in 2020 and race for the first time with the next-generation LMP3 chassis.”