United Autosports topped off their 2015 GT Cup campaign with a podium at the final round at Oulton Park last weekend (10th October). 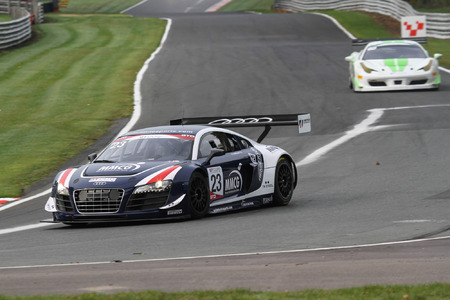 Phil Burgan drove his Audi R8 LMS ultra to a third place finish in the first race of the one-day event at the Cheshire track – at the same event he made his debut with the team 12 months ago.

Phil started his weekend off well, scoring the third fastest time in the morning practice session – the fastest time set by a non-professional driver. He then went on to qualify fourth for the first race of the day. After a great start, Phil was up to third by the end of the second lap and held his position until the chequered flag.

Phil started the second race of the weekend and the final race of the 2015 season, from third on the grid. He made his way up to second by the end of the first lap and was chasing down Richard Chamberlain for the lead. Unfortunately, at the same time, Phil was being chased down by professional drivers Adam Wilcox and Andy Schulz, who ultimately made their way past him and demoted him to fourth. Darren Nelson was also on a charge, challenging for championship points, and passed Phil on the penultimate lap.

At the end of the 22-round championship, Phil finished third in the GTO group, scoring 10 podiums, two pole positions and seven front row starts. He also picked up the Sunoco driver of the weekend award at Silverstone.

United Autosports now move to preparing for the Classic 24 Hours at Daytona in November, along with planning their LMP3 testing schedule with their two Ligier JS P3 cars.

“I was pleased with the first race and getting another podium but I qualified badly as we had a slowly deflating tyre. I actually did my fastest ever lap round here, but the other guys were just that bit quicker. I was pleased with how I drove in the second race too, but obviously with two pros taking part, they were bound to make their way through and fifth is always where I was going to be – I tried to do better but it just wasn’t to be. Darren Nelson recovered well and did a mega quick lap so fair play to him.

“The year as a whole has been great. The best thing has been the team, meeting the people I’ve met and the fun we’ve had. I couldn’t have wished for a better bunch of people to work with. It’s been tough with having eight years off from racing and elevating myself to the level these cars perform at has been challenging, but the team have helped me to get up there to do it. I can see a difference too – I was four and a half seconds quicker this weekend than I was this time last year when I made my debut with the team. I have to accept reality though, and at 63 I’m quite proud of myself to get the results I have.”

“Phil has done really well over the course of the year. To see him progress has been a pleasure and we have loved working with him all year. Phil is a hugely competitive person but manages to be a true gent at the same time. He pushes himself extremely hard, probably harder than he should at this stage in his career. He has done remarkably well this year.

“The standout moment for me was his pole position lap on the demanding Brands Hatch GP circuit. That was a true measure of his ability. It was always going to be a challenge for him after an eight year break from competitive racing, and this year’s GT Cup season has certainly been competitive, but I think he can come away very proud of the results he’s achieved.”