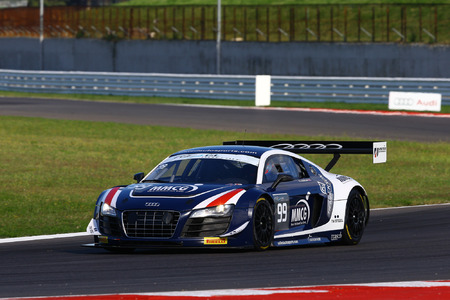 Phil Burgan drove his Audi R8 LMS ultra to third place in the Iron Cup class in both races at the Italian circuit.

Phil qualified the Audi ninth for the qualifying race on Saturday evening. Phil held his position well during the 25-minute race and brought the car home third in the Iron Cup class – setting him up for his ninth-place start on a wet Sunday morning.

After a storming start to the 40-minute race on Sunday, Phil had reached third overall by the end of the first lap and was leading the Iron Cup class. He had a hectic first half of the race, dropping to fifth place over the opening laps and battling with the second Audi R8 in the pack. Phil ultimately dropped to seventh overall, as the pace of the two Ferraris behind was too overpowering in the wet for Phil’s Audi. A second podium of the weekend marked the end of the team’s debut in the SRO-organised championship.

The team now head to Oulton Park, Cheshire for the final rounds of the GT Cup Championship (10th October). 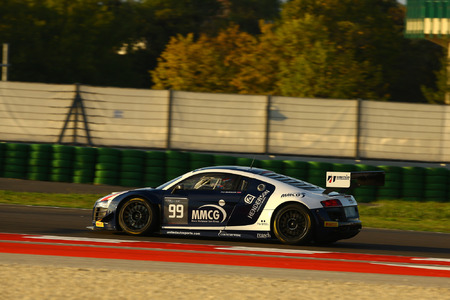 “It was a tough weekend to come to a track we’d never been to before and only have 40 minutes free practice to get used to the layout and how the car works round here. Trying to be competitive against guys who clearly know the track really well was difficult – they were using the kerbs in the wet and I didn’t have the experience to risk it. It’s a very technical track – it has the fastest corner I’ve ever been round flat in sixth gear, with no run off – it certainly catches your attention. Coming away with two trophies is really good though; I had a stonking start up to third from ninth in the second race, which was bit hectic. I dropped to fifth but held onto it for a few laps, but I just didn’t have the pace to hold the other Ferraris off. We’ve got Oulton Park next weekend though, and I’m glad the car will be leaving here in one piece so we can give that our best go!”

“It’s tough to come to a track and be competitive when you’ve not had much running before you’re straight into qualifying. Phil did a great job though and coming home with two trophies is something to be pleased about.

“We’ve had a very busy few weeks, with testing, GT Cup and karting events, and it’s not over yet. The final GT Cup round at Oulton Park next weekend is our focus now – the lads will only have one day to work on the Audi in the workshop by the time it gets back from Italy and we have to load it again for Oulton. We will also be preparing our LMP3 testing schedule with our two Ligier JS P3 cars so it’s all go once we are back in England.”