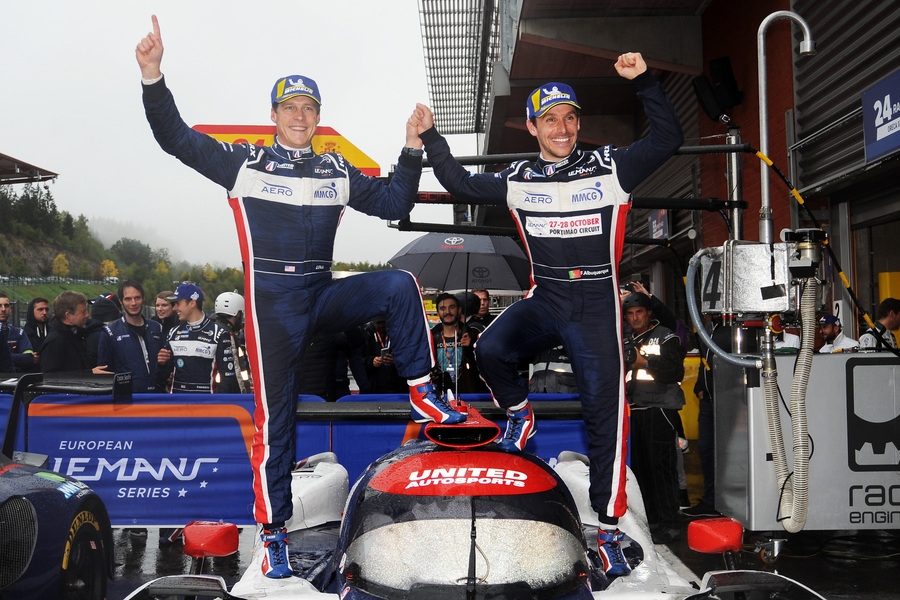 United Autosports recorded a brilliant double victory in a dramatic Four Hours of Spa-Francorchamps in Belgium today (23 Sep). The Anglo-American team led the LMP2 and LMP3 classes before the two-hour mark and due to worsening track and visibility conditions caused by heavy rain, the race was red-flagged with two hours six minutes on the clock. The front row starting #22 Ligier of Phil Hanson (GB) and Filipe Albuquerque (POR) scored a sensational victory to add to their Red Bull Ring rostrum and record the team’s first LMP2 victory of the season at the famous Belgian venue while John Falb (US)/Scott Andrews (AUS) added to United’s joy with a stunning LMP3 win. Will Owen (US)/Hugo de Sadeleer (CH)/Wayne Boyd (GB) finished sixth in LMP2 with Matt Bell (GB)/Tony Wells (GB)/Garett Grist (CAN) recording fourth-place. The result marked United’s third ELMS LMP2 race win – Albuquerque at the wheel of each – and Hanson’s maiden outright international victory in LMP2, the team’s seventh ELMS LMP3 triumph and first for Andrews on his début. United has finished on the Spa LMP3 podium every year since entering ELMS in 2016 with its Ligier sports-prototypes having now achieved 10 wins, 22 podiums in total, from 17 races. The race around the fast, sweeping 4.35-mile track in the Ardennes started behind the Safety Car for 4-laps (15minutes) due to wet conditions almost two hours earlier than had been scheduled in an attempt to miss forecasted thunderstorms. The sixth and final round of the ELMS is held at Portimão (POR) on 28 October.

Albuquerque secured his and United’s second LMP2 ELMS front row start (Silverstone 2017) the previous afternoon while de Sadeleer, who set the ninth quickest time in qualifying, started the #32. Seventh-placed Hanson pitted the #22 after 30 minutes under Safety Car conditions, Albuquerque resuming 12th, with the #32 running seventh when the race re-started. At one-quarter distance, #32 and #22 lay eighth and 10th, with #32 pitting to Boyd (tyres/steering wheel change due to radio malfunction) moments later. The majority of the LMP2 cars also pitted at this time allowing #22, having stopped earlier out of sequence, to take the lead on 66 minutes, Albuquerque setting a searing pace, before pitting for fuel and new wets on 85 minutes with #32 10th. The Portuguese was back in the lead on 90 minutes as track conditions and visibility worsened, on-track incidents bringing out the Safety Car for a third time on 100 minutes with #22 first and #32 sixth with the red flag appearing on two hours, six minutes. With only half points awarded due to the race not running to its full length, United now lie seventh in the Teams’ standings.

Andrews, making his United, ELMS and Spa débuts due to #2 regular Sean Rayhall being unwell, started having commendably posted the eighth fastest time while the #3 of Grist, also a Spa race “rookie”, lined-up behind the sister Ligier in 10th courtesy of Bell’s efforts the previous day. After 67 minutes, #2 and #3 ran third and seventh, Andrews revelling in the treacherous conditions with lap times faster than the class leader. #2 (fuel only) and #3 (full service to Bell) stopped on 90 minutes, resuming first and fifth. Andrews pitted for a full service on 110 minutes under Safety Car conditions with Falb taking over leading #2 with #3 placed fourth prior to the red flag stoppage. With a maximum of 26-points on offer in the final race next month, United are third trailing the leaders by 15 points.

“It’s fantastic to finally get an LMP2 win after some disappointments this season. Our qually performance showed that we also now have very good dry weather pace. The opening laps were tricky but the conditions were the same for everyone. It was a case of judging the grip levels around the track which were changing with every lap as the rainfall varied. Visibility was awful when we were racing. A great strategy from the pit-wall got Filipe in the car and got us track position.”

“I’m so happy. We’ve fought so hard all season with no reward. Today was chaotic racing and often dangerous but I was determined to get this win for United. Eau Rouge was especially difficult when it was really wet. My pace in the wet was also good and I was just focussing on getting a big lead before handing the car back to Phil but of course that did not happen with the race being stopped which was completely the correct call from the race director. The Ligier was very, very good in qualifying – just brilliant in the middle section – and I was very happy to set a time so close to the championship leader who only beat me to pole in the closing seconds of the session.”

“I didn’t get to do today’s race – Portimão can’t come quick enough.”

"The Ligier was great for me. I was very comfortable but was unfortunately stuck behind traffic in which there was some pretty aggressive driving so I needed to be cautious and stay out of it despite being quicker than some of those ahead. The car was also good in qually but I didn’t get the full potential out of it – I underestimated the grip level of the Michelins."

“I never thought I’d complain about racing in the wet but today was something else. I’ve never raced in such bad conditions. I couldn’t see anything on the straights combined with aquaplaning. With a little luck had the conditions improved if the race had re-started, a podium may have been possible. But from how our season has run up until now, Spa has been a massive step forward and gives us confidence heading to Portimão.”

“It was a crazy race. Scott nailed it, driving the wheels off the Ligier. I then got to know first-hand just how treacherous it was out there when I took over from him. I couldn’t see much of anything. The visibility was terrible. Our engineer Gary made a great strategic call and it’s awesome to climb the top step of the podium again.”

“First time with United, ELMS and at Spa. I had very little prep time having jumped on the plane from the States when Sean was taken ill and it took me longer to get my head around the car than I’d envisaged but felt I put together a good lap in qualifying. My opening stints in the race were the hardest stints I’ve ever done. I couldn’t see anything. It was crazy. I was sideways on the straight in sixth gear. That said, I’m privileged to have been here this weekend and couldn’t ask for anything more. My sincere thanks to United for the opportunity.

“The Spa weather lived up to its reputation big time today. As soon as I took over from Garett it was clear to me the race would not run the full four hours. Qualifying was depressing. I felt I’d extracted the maximum out of the car but just didn’t have the pace and struggled with massive understeer.”

“I didn’t get to race. Garett and Matt did a good job in horrible conditions. Roll on Portugal.”

“Conditions were terrible. I was very lucky on my ‘in’ lap to hand the car over to Matt when I almost aquaplaned off the track. Hopefully the weather will be better in Portugal.”

“It’s a great result, an awesome day in the office! The organisers did a good job in bringing the race start time forward and then were correct in red-flagging the race when they did as the track conditions were absolutely dreadful. Our drivers did a fantastic job and I’m proud to have witnessed this great result at Spa.

“Well, this was a wet one! Funnily enough only last week I reflected on the fact that I didn’t really appreciate our previous double class victory [Silverstone 2017] enough at the time so it’s nice to be in a position this time to really appreciate all of the hard work that’s gone on this season finally rewarded on both sides of our garage. It’s great to be going to the final race in with a shout of winning the LPM3 title for a third consecutive year. Obviously we aren’t in LMP2 title contention so the next best thing is to go for race wins. I’m delighted for Phil. He did exactly what was required, kept it clean at a very difficult point of the race when other drivers with more experience were spinning out, while Filipe, as we all know, is a class act. It was a good result for the #32 too while Scott was fantastic fighting his way to the front after a great strategy call from his engineer to short fill their car at his first stop. ”