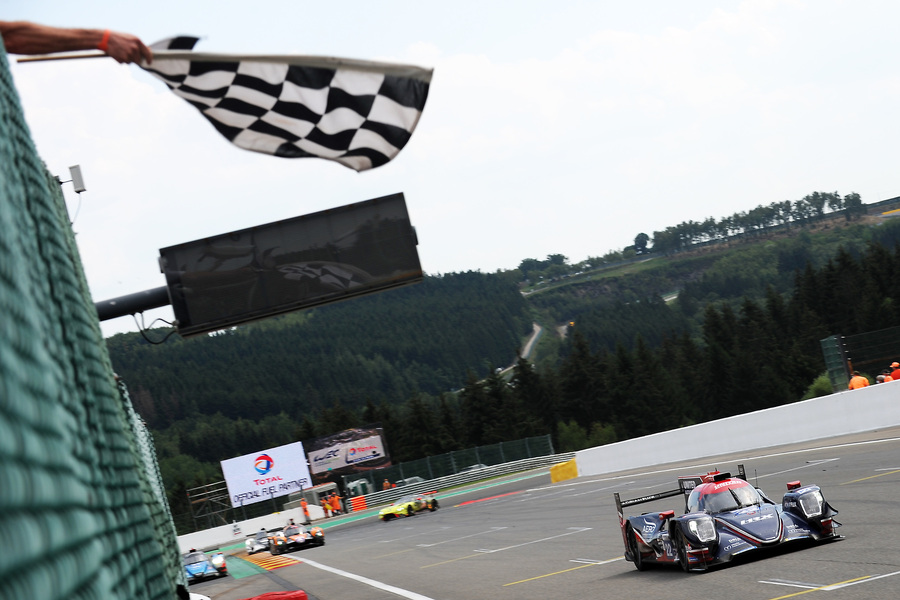 United Autosports have scored their second double win in a row at Spa Francorchamps, Belgium today as Phil Hanson and Filipe Albuquerque won overall in the #22 Oreca 07, while Wayne Boyd, Tom Gamble and Rob Wheldon won the LMP3 class in the #2 Ligier JS P320.

The #32 crew of Alex Brundle, Will Owen and Job van Uitert finished fifth, with the #3 LMP3 Ligier of Jim McGuire, Andrew Bentley and Duncan Tappy finishing fifth in LMP3.

The ELMS team now moves on to the third round of the series at Paul Ricard, France on 28-29 August, but before that United's FIA World Endurance Championship team resumes racing next weekend, also at Spa. (14-15 August).

Our LMP2 cars locked out the front row for the start of the race, after dominating qualifying performances from Filipe Albuquerque and Job van Uitert on Saturday. Phil Hanson lined up on pole position for the second time this year, with Will Owen alongside him in second. Both made a great start, maintaining positions on the opening laps. With 16 minutes gone, the safety car was called out to rescue two LMP3 cars that had gone off track. On the restart, Phil, struggling with grip, dropped to second, with Will in third. After 48 minutes of running, Phil pitted the #22 for fuel only, with Will pitting the #32 on the same lap, also just for fuel. Just short of the one hour mark, a second safety car was deployed to clear a stranded GT car as Will unfortunately picked up a stop and go penalty for contact with a Ferrari, dropping him down to 12th. After 38 laps, both LMP2 cars pitted, Phil in the #22 changing to Filipe Albuquerque and Will in the #32 handing over to Job van Uitert. With just over two hours left to run, Filipe passed the #26 to retake the lead of the race, while Job began to make places up in the #32. Both LMP2 cars then pitted within a lap of each other, shortly before an FCY was thrown. The #32 re-joined in eighth with Alex Brundle now behind the wheel. With less than an hour left to run, Filipe was passed by the #26 just as the rain started to fall. Shortly after that, the #26 crashed into the tyre barrier as Filipe pitted to hand the #22 back over to Phil once again, changing tyres but sticking with slicks. Alex pitted the #32 with 41 minutes remaining and made his way back out again. With 27 minutes remaining and a one minute 27 second lead, Phil brought the #22 into the pits for a splash of fuel and re-joined comfortably in the lead. He remained in the lead until the chequered flag taking the #22 crew’s third consecutive Spa race win along with fastest lap of the race.

Our LMP3 team continued where they left off at Paul Ricard with a second consecutive pole position for Wayne Boyd in the #2 Ligier JS P320. Duncan Tappy qualified the #3 fourth on the grid. Rob Wheldon started the #2 Ligier JS P320, while Andrew Bentley started the #3 Ligier. Rob made a great start, pulling a four second lead to the second placed car in the opening laps, but the safety car after 16 minutes ruined Rob’s lead. On the restart, Rob maintained the LMP3 lead, while Andrew had moved up a spot to third. After one hour and 10 minutes, and a fantastic opening stint, Rob pitted the #2 from the lead. Andrew Bentley momentarily took the lead of the race in the #3 Ligier before pitting to hand over to Jim McGuire. Unfortunately, not long after starting his stint, Jim had to pit again with a steering wheel issue. Rob pitted the #2 Ligier just short of the two-hour mark, handing over to Tom Gamble. With 1 hour and 45 minutes left to run, Duncan Tappy took over the wheel of the #3 Ligier from Jim McGuire. Tom in the #2 pitted for fuel only just as the skies began to get darker and rain was incoming. With under an hour to go, Wayne jumped on board the #2 as Tom pitted, just as the rain began to fall. He went back out on slicks to re-join in the lead of the race. Duncan in the #3 meanwhile was running fourth with 37 minutes remaining after a great couple of stints by him, but with 29 minutes remaining he pitted again for the final time for fuel dropping him back to seventh. At the end, Duncan finished fifth with Wayne crossing the line to take their second consecutive win of the 2020 season. The #2 Ligier also scored the fastest LMP3 lap of the race.

United’s #2 car now leads the championship by 29 points with three rounds to go. The #3 car lies seventh in the standings. 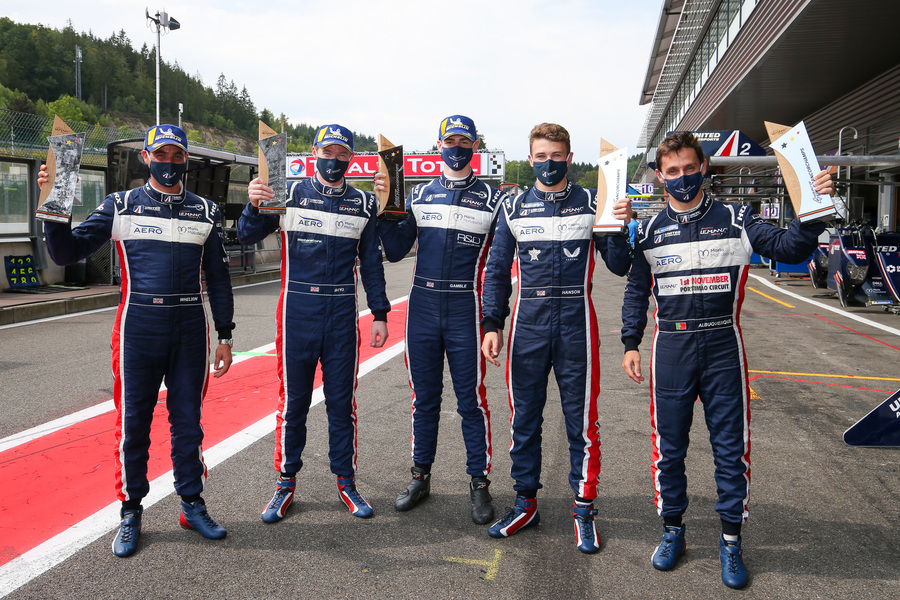 “It was a really good race. It looked like it was going to be a tough battle between us and the #26 but the first rule of the game is you’ve got the stay on the track. I think it shows the level of experience coming from the team on our side of the garage because Filipe and I have worked together for over two years now and the engineers and mechanics haven’t really changed in that time, so when we are hit with unusual circumstances, we manage to deal with it better and adapt. If we can find more pace, which I think we can, then we can only get stronger.”

“It’s crazy how much we are enjoying the ride now at United. The momentum is great. A second consecutive double win for the team and for us it’s the third time we have won at Spa. What can I say? It was a great win and a great fight. But we never take anything for granted. The chaos of FCYs and safety cars can mix it up a lot, but we took care of that. It was a great win. Phil and the team did a mega job. Congratulations to the whole team as its been a fantastic beginning to the year for them. For me personally, it’s a very satisfying win as it has been a hard few weeks and I want to dedicate this win to my Dad."

“Not the best race for us. It shows how much our expectations have moved since winning the first event but I’m pretty unhappy with fifth. Will had some bad luck with the contact and it was really a recovery race from there. We rolled the dice towards the end trying to make the stint longer with fuel, but then the FCY was brought out which ruined our hard work and summed up the day really. All we can do is say that we tried hard and move on to the next one.”

“It was a tough race in many aspects but it was a good recovery to finish P5. While I was running third, my pace was ok but not enough to be fighting the guys in front. I then made an error that got us a penalty but from then on, I struggled a bit. We had a good strategy call and we managed to jump a few places but then the FCY came out and the others pitted so we lost out a bit there. We’ve got to keep it clean for the championship going into Paul Ricard.”

“In general I think we did pretty good damage control after a debatable stop and go penalty for Will. In the end, we were always catching up and we had to take some risks, some worked out and some didn’t. In the end to finish fifth after such an eventful race is not good, but not bad either, but I’m happy with the points.”

“Another really good weekend for us. Obviously, the pole for us yesterday gave us the perfect start. Rob had a clear track at the start of the race and he did an absolutely fantastic double stint, he deserves a lot of credit for this. Tom did a great job too creating me a big lead so it was just a case of bringing the car home. It just shows how good our car is, it has been unbelievable all week so a massive thanks to the boys and all of United.”

“The car was fantastic all weekend. Wayne did the first bit by putting us on pole yesterday then Rob did a phenomenal stint building us an advantage. I jumped in the car in the lead and built a bit more of a gap. Wayne did a great job bringing it home. Full credit to the team for giving us a fantastic car and now I’m looking forward to going back to Paul Ricard where we know we’ve got a good car.”

“It was a really good weekend for us. I had a good opening stint and was pleased I could build up a lead for Tom and Wayne. Our second win in a row is a great feeling and I’m looking forward to getting to Paul Ricard where we know we can go well there.”

“I’m really excited for our top five finish. That was our goal for the weekend really. I had a challenging stint with the steering wheel issue but we persevered, changed the wheel, kept going, stayed in the game and Duncan brought it home in fifth so can’t ask for more than that.”

“I think if you had told us we would get P5 at the beginning of the week then we would probably have taken it. Jim did a really good job today even though we had to come in and change the steering wheel. All in all, we managed to bring in a result so we will see where we are at Paul Ricard.”

“We had a really good race. I really enjoyed it. It has been a strong weekend for us and we have shown our pace really well. The team have put together a really good car and we have worked hard to get a good car by the end of the weekend. I think the car was at its best during the race. My stint was good but unfortunately a couple of safety cars ruined that. Jim had a couple of issues with the steering wheel but I’m not sure how much it affected the result. Ultimately, we had a great weekend. I think we could have been on the podium but we have just got to keep hunting.”

“Another fantastic race weekend for the team. I’m very proud that we are leading both championships after two rounds. Awesome effort by the whole team. I’m looking forward to seeing how we get on for the rest of the season now.”

“What can I say? Another double win. And a third consecutive win at Spa for Phil and Filipe. The team have done a great job over the weekend and to have all four cars finish in the top-five is really good. The #32 and #3 were unlucky today but they both still had good results and scored good points towards the championships. I’m pleased we are still leading both championships going into the second half of the season. Let’s see how we get on at Paul Ricard next time out. And the Spa WEC race next weekend.”