Scotland’s retired race ace Franchitti on tour in the Highlands 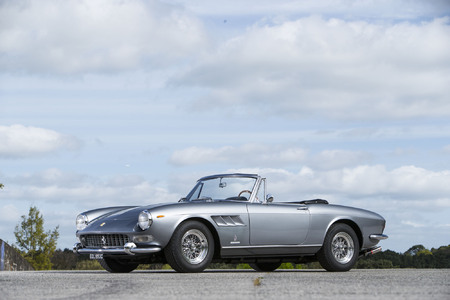 Retired race ace Dario Franchitti is eagerly looking forward to a two-day “Highland Tour of Scotland” before arriving at the Palace of Holyroodhouse in Edinburgh for this year’s Concours of Elegance (4-6 Sep).

Franchitti was born in Bathgate, West Lothian, and having been based in the U.S. enjoying a stunningly successful career, only recently returned to his native Scotland. Dario will share the driving duties of a very rare Ferrari 275 GTS owned by American marketing entrepreneur Zak Brown.

A four-time IndyCar Series champion and three-time winner of the famous Indianapolis 500, Franchitti, a former pupil of Stewart’s Melville College in Edinburgh, was appointed Member of the Order of the British Empire (MBE) in the Queen’s 2014 Birthday Honours for services to motor racing.

Franchitti and Brown will drive in a non-competitive convoy of around 60 cars on Wednesday and Thursday (2-3 Sep) in the latter’s 1965 Ferrari of which only around 200 examples of the 155mph 275 GTS roadcar were ever built. Wednesday’s 140-mile route starts and finishes at Cameron House on Loch Lomond via Inveraray Castle and Killin. On Thursday, the convoy drives from Loch Lomond to Edinburgh taking in Dunblane, Gleneagles Village, Dollar, Knockhill, the Crook of Devon, Kinross and Dunfermline in an 80-mile loop.

Brown, founder of Just Marketing International (JMI) and currently Group CEO of CSM Sport & Entertainment that acquired JMI in 2013, has an undiluted passion for motorsport and is a keen collector of road and racecars that are stored and maintained at the United Autosports raceshop in Leeds. Zak will also have his 1982 Lamborghini Countach 5000S on show at the event.

Franchitti himself will be displaying the three “pace” cars at the Concours that he won for his Indy 500 victories – a long-standing tradition being that the race winner takes home the pace car from that particular event. Dario will be exhibiting a 2007 Chevrolet Corvette, 2010 Chevrolet Camaro and 2012 Chevrolet Corvette 427 and additionally his ex-Jim Clark 1964 Lotus Cortina that won the British Saloon Car Championship that year.

The Concours will also pay tribute to another of Scotland’s finest racing drivers, Sir Jackie Stewart. On display will be all three of the cars that Sir Jackie, who is managed by JMI, drove to his three Formula One Driver’s Championships, along with the helmets he wore when he won them.

Only 60 of the world’s rarest and highest calibre cars are invited to take part in the main Concours but around a hundred other models will also be on display at the Palace of Holyroodhouse. Established in 2012, the inaugural event was held at Windsor Castle with subsequent events staged at the Royal Palace of St James in London and Hampton Court Palace. Money raised at this year’s event will go to the Walking with the Wounded, Action on Addiction and Sir Jackie Stewart’s charity, Springfield Motor Racing’s Club for Young People charities. Over the course of the three past events, Concours of Elegance has raised more than £600,000 for charity. 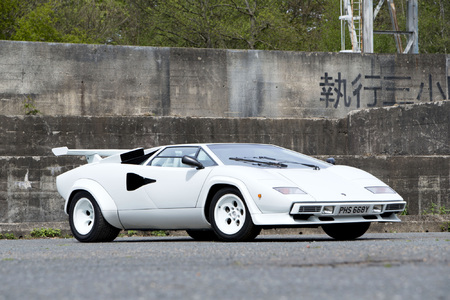 Pininfarina built 200 275 GTS Roadsters for the American market (including 14 in right-hand drive) from 1964-1966 with entirely different bodywork to the standard 275. It was intended to be more of a GT car and less of a sports car than its GTB brother. The 275 GTS was replaced by the 330 GTS, leaving no 3.3 litre convertible in the range until the creation of the 275 GTB/4 NART Spider.

The first Countach appeared in 1974 and the model stayed in production until 1990. Lamborghini produced 2,042 examples in various specifications and it quickly became the iconic supercar of the era. The wedge-shaped body and “cabin-forward” design to accommodate the large V12 engine set the tone for supercar design for years afterwards.

“I’m delighted to get the opportunity to be involved in a world-class Concours event taking place at home in Scotland. I’m really looking forward to going for a blast in Zak’s Ferrari 275 GTS. He and I are old pals and I’m looking forward to showing him around some parts of Scotland. As a Porsche fanatic, I’m showing one or two of those as well. It’s not competitive so I can just relax and enjoy myself along with some great people. There will be some amazingly rare road cars there. It’ll be cool to display my three Indy 500 race winning pace cars at the Palace. I’m also showing Jim Clark’s ‘64 Lotus Cortina – I’m very proud to own it and to look after that car. It’s a real honour to be able to contribute to celebrating Scotland’s successful history in motor racing – including that of my mentor Jackie Stewart. From a purely personal point of view I’m looking forward to catching up with a lot of friends who are in town too.”

“Dario is one of the few ‘super nice and super quick’ guys in motorsports. I’m privileged to have him as a friend and to have witnessed what can only be described as a fantastic career. Dario and I raced against each other in the 1994 British Formula Three Championship, or to be more frank, we were on the racetrack at the same time! He was on a different planet. In more recent years with my role at JMI, I attended a number of IndyCar and Indy 500 races that Dario contested. He’s not only an immensely gifted driver but a great character outside the cockpit of a racecar which I’m sure the spectators at the Concours in Edinburgh will quickly realise.”