Schumacher Benetton on display at Goodwood Festival of Speed 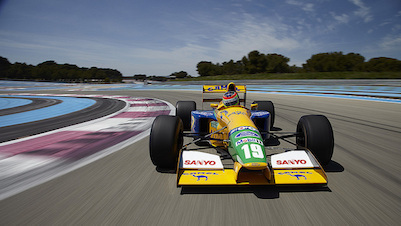 Michael Schumacher’s 1992 Benetton B191B will be on display at the prestigious Goodwood Festival of Speed this weekend (26-29 June).

Schumacher achieved his first two podium finishes by coming third in this car at the 1992 Mexican and Brazilian Grands Prix. Nelson Piquet drove it in his final Grand Prix at Adelaide in 1991 and Martin Brundle drove the same chassis for his Benetton debut in South Africa in 1992.

The car is now owned by Zak Brown, founder and CEO of Just Marketing International (JMI), the world’s largest motorsport marketing agency. It is prepared and raced by United Autosports at historic events around the world.

The Goodwood Festival of Speed is set in the grounds of Goodwood House in West Sussex.

“The Schumacher car is a great car and I’m glad we can bring it to Goodwood for the Festival of Speed. It’s such an amazing event, with a fantastic atmosphere so to be part of it with one of my cars is very special.”