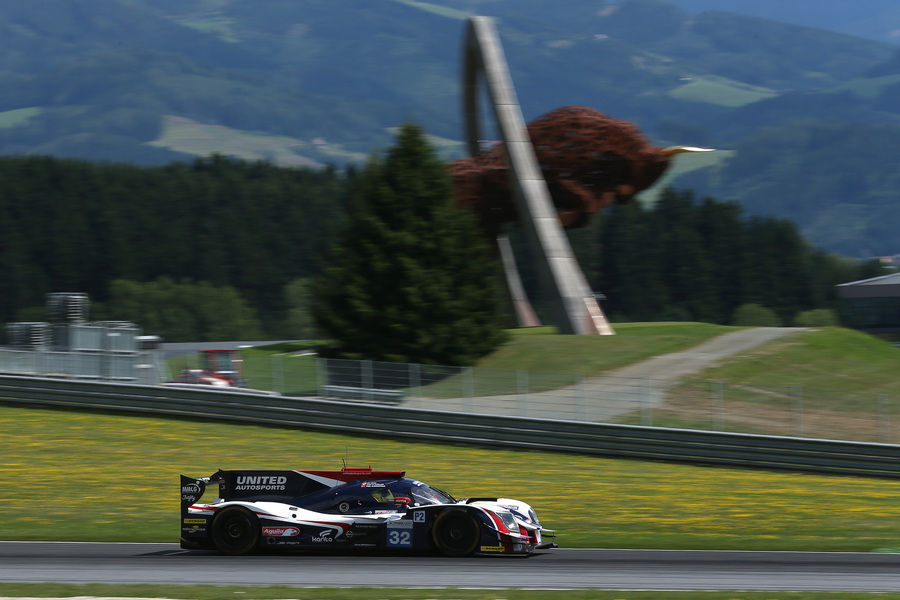 United Autosports return to Austria this weekend (20-22 July) to take on the Red Bull Ring in round three of the European Le Mans Series and round four of the Michelin Le Mans Cup.

The United Autosports LMP2 team are hoping to replicate their win from 2017, when Filipe Albuquerque, Will Owen and Hugo de Sadeleer brought the #32 Ligier JS P217 home for their second victory of the season. Carrying on from their fantastic third place finish at the Le Mans 24 Hours last month (results still provisional), Will and Hugo, along with Wayne Boyd in the #32 and Phil Hanson and Filipe Albuquerque in the #22 are both setting their sights on an Austrian victory.

In the LMP3 team, the goal is the same. John Falb and Sean Rayhall scored two second place finishes during the Road to Le Mans race last month and finished second at Red Bull Ring in 2017. They are aiming to take their first win of the season this time round, after cruel luck in Monza saw them knocked out of the race lead with only seven laps to go. Tony Wells, Garett Grist and Matt Bell are also hoping to improve on their third-place finish at Monza in the #3 Ligier JS P3. The trio are currently lying fourth in the ELMS LMP3 standings, only one point ahead of team mates John and Sean in sixth.

Over in the Michelin Le Mans Cup team, all three cars are hoping to improve on their Road to Le Mans results. Matt Bell and Jim McGuire in the #22 AERO Ligier JS P3 suffered unfortunate luck with a mechanical issue before the first race in Le Mans, after a solid fourth place qualifying effort from Matt. Colin Braun and Naj Husain also fared well at Le Mans with good qualifying sessions from both drivers in the #32 Ligier JS P3. They will be hoping to add more points to their inaugural European championship challenge. Richard Meins will be rejoined by Christian England in Austria after racing with Shaun Lynn at Le Mans. Richard and Christian have had a promising but unlucky start to the year after a puncture hampered their progress in Paul Ricard and a power failure issue caused by debris, ruined their top-five finish at Monza.

“I’m really excited to get back out racing in Europe. Red Bull Ring is one of my favourite tracks on the calendar as it always makes for good racing. There’s always a lot of traffic to judge throughout the race too. After all the tough luck we’ve had at the start of the year, I hope we can finally have a clean weekend and get on the podium as I think we have missed out a few times this season after running strong for the most part.”

“I can’t wait for Red Bull Ring. It’s a track that I really like and it will be the first time we will drive with full downforce this year. Normally we are much closer when it comes to high downforce tracks so my expectations are high. I know we didn’t start the season as we would like, but that changes nothing for the next race because the aim is always the same, to do our best and our best is to win!”

“This ELMS season has been challenging so far, and we have not achieved the results we would have liked.  Both United Autosports cars have the potential to get great results at the upcoming four races, so it's time to focus and build on what we have learned. I am excited to continue the ELMS season with the momentum from a good result at Le Mans.  I have learned a lot about myself as a driver in the past two months since Monza. Hopefully what I have learned will help me contribute even more our team's performance. Red Bull Ring is a fun track in a pretty location, and the schnitzel in Austria is always a nice treat too.”

''Red Bull Ring is one of the strongest tracks for the whole team and suits our Liger perfectly, so we're hoping for a strong result like last year.''

“I can’t wait for Red Bull Ring. It’s one of my favourite tracks on the calendar and I’ve always had good pace there in LMP3 so I’m sure that will transfer over into LMP2. Our season so far hasn’t had the results that we’ve wanted but I feel this track should suit us down to the ground. We will definitely be pushing for the win here to get our championship back on track.”

“Red Bull Ring is a seemingly simple track but it is one of the best for creating great racing. It is the bull ring of auto racing and I can’t wait to get back there. We have some unfinished business from last year after a post-race penalty stripped away our hard-earned win. The season is set up for us to work harder than ever over the next four rounds and I am excited for it!”

“I am extremely excited to get back to the Red Bull Ring with United Autosports. I think we finally got rid of our bad luck at the Road to Le Mans race and at the right time to try to win the European Le Mans Series Championship again. I believe our team is strong enough to come back and be in the fight for this title.”

“I’m looking forward to resuming ELMS after a bit of a break. We’ve done some testing since Monza and feel we’ve made some gains and our performance at Le Mans seemed to verify that so we’ll be targeting the top step in Red Bull Ring for sure.”

“It seems a long time since we raced in Monza and got our first podium of the year, but I am looking forward to getting back in the car at Red Bull Ring. We had a good test at Spa last week so fingers crossed we can aim for a few steps higher up the podium this weekend.”

“I think Red Bull Ring should be a very good weekend for us. Coming off a podium at Monza and some solid testing, I think we are the best we have been. A lot of things haven't gone our way so far this year, but we are still in the hunt and in a great position for the final four races. I am looking forward to a great weekend with Tony and Matt.”

“This season has been exciting—the field has been massive and the tracks are legendary. Driving with Matt has been great. Obviously we want to be higher in championship points, but we’ve put in a solid effort in our AERO-painted Ligier JS P3. Paul Ricard, Monza, and Le Mans are all behind us and now I’m looking forward to the Red Bull Ring in Austria. It should be great. There are some nice, fast straights from start/finish to turn four, which should allow for an exciting start and 120 mins of great racing! After that, we get a nice summer break before heading to Spa and Portimão to finish out the season. Overall, I’ve been quite happy with the performance of the AERO-painted LMP3 United Autosports has put together for Matt and me. We’re going to push hard for these last three races and hope to score some good points for ourselves and for the team.”

“We had great pace at Le Mans and Jim was the fastest he’s been which was great to see, we just had some bad luck which hindered our results. Red Bull Ring was new to Jim last year, the lack of track time plus the tricky nature of the circuit hurt us but the experience of a second year plus the pre-event test should put us in good shape.”

“We're going back to another great track, the Red Bull Ring where the location and atmosphere are unique. After a rather frustrating time at Le Mans where I seemed to spend a lot of time behind a safety car, this will hopefully see us get back to continuing the progress we have made at each race this year. It was good to be back with Shaun for the Le Mans event and this weekend I am back with Christian when hopefully we can build on our strong performances at Paul Ricard and Monza. We are now starting the second half of the season and this has certainly been one of my most enjoyable years of racing with the United Autosports crew and hopefully luck can go our way for the balance of the year.”

“It feels like forever since I was last racing in the Michelin Le Mans Cup. We are now into the second half of the season and so far we have shown some great pace but have had some unlucky moments in the races. I love the Red Bull Ring and if we can have a clean race with no issues, then we have a great chance of a podium result.”

“I am really excited about driving at Red Bull Ring with Colin. This year has been a great learning experience for me and now it’s time to put it all together. The race weekends are always fun and exciting with United Autosports and I can’t wait to get back in the car after what feels like a long break since Le Mans.”

“It has been a fun start to the season. I am determined to get a result that I feel represents the efforts and performance we have shown so far. I think for both Naj and I we have been getting more comfortable with the car and the style of racing in the MLMC at each event, but we have lacked a bit of luck that we need to get a great result. Red Bull Ring would be a great weekend to put all the pieces together and execute a brilliant event that I know we are capable of. Naj has been working hard on the simulator and our engineer, Andi has been hard at work preparing for the race weekend. I am very excited to get back in the car!”

“Red Bull Ring should be a good race weekend for us. Both our LMP2 and LMP3 cars went well there last year so fingers crossed for another good weekend there.”

“I’m feeling positive ahead of the Red Bull Ring weekend after the success we had last year in both LMP2 and LMP3. Our teams have had some back luck so far this year so I’m hoping for a turnaround in our fortunes in Austria. We have shown we have the pace to win races in both the ELMS and Michelin Le Mans Cup, we now just need to convert that into a result.”