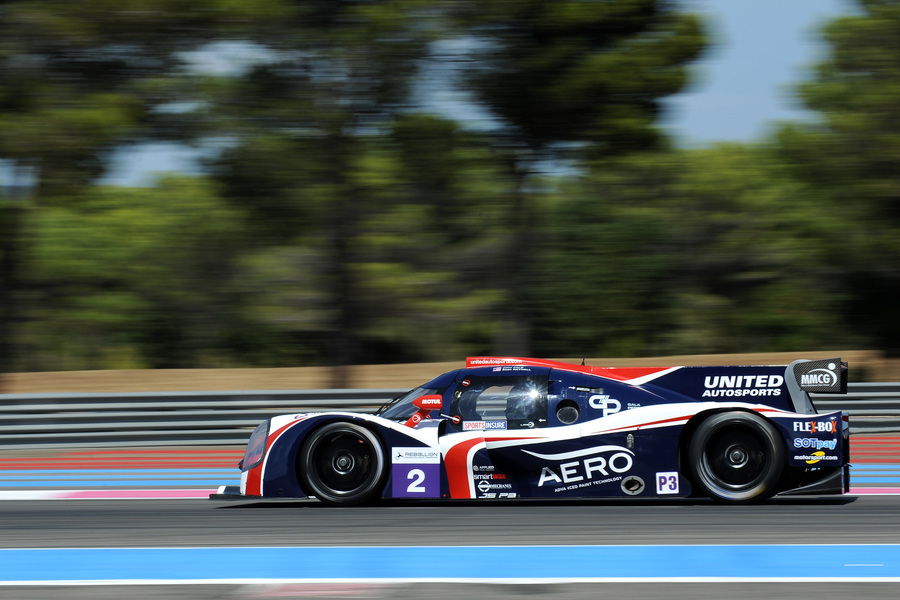 United Autosports heads to the penultimate round of the European Le Mans Series next month having extended its LMP3 Teams championship lead and consolidated second in the LMP2 standings. John Falb and Sean Rayhall claimed LMP3 honours for the second time this season – their third podium having been denied victory at the Red Bull Ring after a post-race penalty – while Filipe Albuquerque, Will Owen and Hugo de Sadeleer swept their Ligier JS P217 to third place in the latest 4 Hour race at Paul Ricard in France today (27 Aug).

The only negative for the Anglo-American team in the fourth round of this year’s six-event series that sees United competing in LMP2 for the first time and attempting to successfully defend its ELMS P3 title, was the retirement of the Wayne Boyd, Christian England and Mark Patterson Ligier early on. United starts the penultimate round of the ELMS staged at Spa-Francorchamps in Belgium on 24 September leading LMP3 by 12-points and trailing in LMP2 by seven-points.

“With just two races to go we’re in contention to retain the LMP3 title and winning the LMP2 ‘crown’ in our first year at this level which is absolutely awesome. All the guys drove their hearts out today to achieve these fantastic results. Additionally, we enjoyed this success with some top-end strategy in the pits so it was a big, big team effort. Hopefully the #3 car will get a roll of the dice at Spa – they deserve it.”

“I feel massively [sorry] for the #3 car guys – they don’t get any luck and fully deserve to be fighting at Spa and in Portugal for a class win. It was a great drive by Sean [Rayhall] and John [Falb]. It was tight and nerve wracking as different strategies played out while the #2 Ligier gambled on what could have been considered a risky set-up. It looked like our race with the LMP2 Ligier was over after the opening corners having been hit and spun around. But what a comeback! Really fantastic fighting spirit and perfect drives from all three drivers combined with brilliant pit-wall strategy.”

Qualifying on Saturday afternoon needs an explanation. As at Le Mans, the Ligier JS P217 found itself at a disadvantage compared to the straight-line speed of its chassis rivals around the ultra-fast Paul Ricard track even taking into account the installation of a chicane on the Mistral Straight. So, a fifth quickest time achieved by Albuquerque, just 0.769 seconds off pole, was a fantastic performance by the Portuguese and team. The same applied to the efforts of Rayhall who recorded the fifth fastest time in LMP3. And Boyd, the Northern Irishman having previously achieved four front row starts including two poles in his ELMS career with United. A totally unrepresentative 13th place came about after a spin at Turn 6 – having just set the best LMP3 Sector 1 time of the session.

The race got underway at 12 noon today under a cloudless blue sky and an ambient temperature of 31C with de Sadeleer, Rayhall and Boyd at the helm. Hugo made a good start up to fourth but was spun down to 15th and the back of the LMP2 field midway around the opening lap by another car which was later penalised for the clash. Rayhall was shuffled down to eighth just ahead of Boyd in LMP3 before the latter disappointingly retired with an engine issue at 13 minutes.

De Sadeleer stopped for fuel after 44 minutes, resuming eighth, while Rayhall, lying seventh in LMP3, pitted under Full Course Yellow conditions at one-quarter distance – the #32 taking the opportunity of swapping to Owen plus a splash of fuel and three new tyres under the caution period. Sean surged in to the lead of LMP3 on 85 minutes while Owen moved up to eighth in LMP2 one lap later. The scheduled pit-stops of the LMP2 cars were now out of phase with Owen actually taking the lead after 110 minutes before pitting for fuel.

Owen ran fifth overall at mid-distance with Rayhall 19 seconds ahead in LMP3 before he pitted for a full service to Falb. Albuquerque took over the #32 with 84 minutes remaining just as Falb re-took the LMP3 class lead and with an hour to run, Filipe lay fourth but catching the third-place car, with John well clear out in front in LMP3. Albuquerque was up to third with 42 minutes to the finish before making his final stop for fuel as did P3 class leader Falb six minutes later – the United duo taking the chequered flag after 116-laps third overall and first in class respectively.

“Hugo getting taken out on the first lap destroyed our race – we could have put more pressure on the eventual winners and definitely challenged for second place. My stints were fun. Initially I was benefitting from grip but in the closing stages I was struggling. We are in a striking position for the championship. It’s Game on! I was pretty happy with P5 in qualifying. We’d had an imbalance in practice but made a good step forward making the car quicker and enjoyable to drive. We just don’t have the outright pace compared to the Oreca especially.”

“The pressure is now on for the championship and we will really have to push at Spa and do our very best! I took over from Hugo during the FCY, on new tyres, and when I got in it was superb. I pushed and battled really hard and finally got ahead of a bunch of cars. The second stint got pretty tough because I pushed hard at the beginning and the tyre grip fell away. The Dunlops performed super well but no matter what you do here, in this heat, it's going to be difficult.”

“I started and my stint was all about tyre management which was necessary looking ahead to the entire race but hugely frustrating. A car on the inside of me hit me at the chicane causing me to spin. Thankfully it didn’t cause damage. My pace was good considering I couldn’t push hard and then I stopped earlier than planned when we stopped during a FCY."

“We felt really good and had a good strategy in place but 15 minutes into the race I thought we were in trouble. But A FCY helped us and everything worked out well for us. The heat didn’t bother me too much but it’s a physical and mentally challenging track.”

“We decided to go low downforce for this race and that did not seem like a great idea in the early stages but we definitely benefitted from having the extra tyres available to us when our rivals were struggling with grip. My second stint came to me but I was still surprised to be told over the radio that I was leading by over 20 seconds at one point. It was a risky strategy but United did an amazing job. We’d saved our tyres I was very happy with the Ligier in qualifying. To claim P5 in qualifying says a lot about the team and the car.”

“I heard an unusual [engine] noise during the race and the rear tyres must have become coated with oil causing me to spin. We knew that we needed to get the best from the tyres in the first couple of laps in qualifying. I went purple in Sector 1 but then pushed too hard at Turn 6 and lost the rear. One to forget I’m afraid."

“We haven’t had the luck at the moment but hopefully things can turn around for the last two races. I love Spa and after this weekend, already looking forward to getting to Belgium.”

“Paul Ricard has been hugely disappointing but on we go to Spa where hopefully our bad luck disappears! The great pace shown by our ‘sister’ car underlined where we could have been here today.”