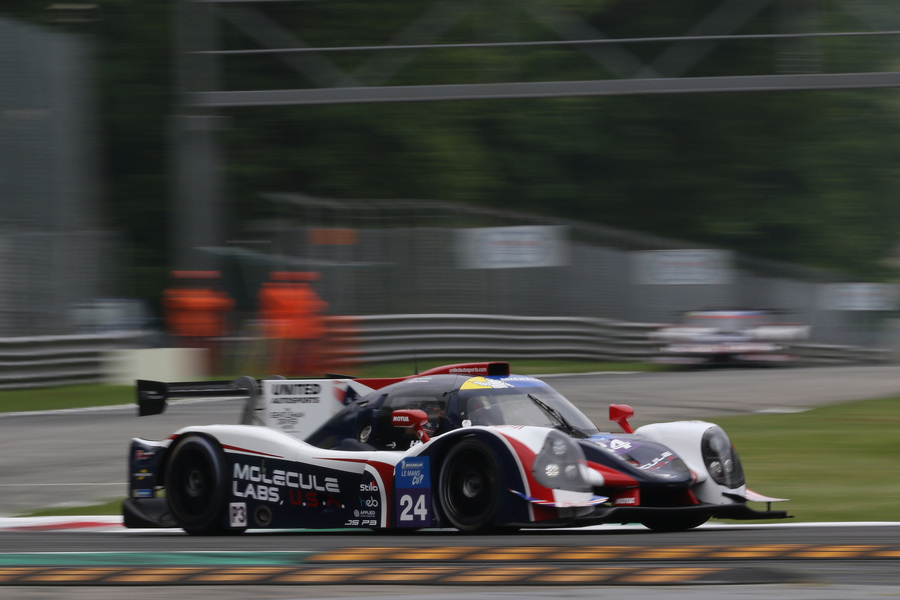 United Autosports have once again scored a double top-ten finish in the 2019 Michelin Le Mans Cup as Mike Guasch and Wayne Boyd finished sixth and Jim McGuire and Matt Bell finished eighth in what was a dramatic ending to the second round at Monza, Italy.

The race began this afternoon under sunny skies with all three United Autosports Ligier JS P3s lining up together on the grid. In qualifying earlier in the day, Rob Hodes put the #23 Ligier in 13th, Mike Guasch (on his Michelin Le Mans Cup debut) qualified the #24 14th, while Jim McGuire lined up the #22 AERO Ligier JS P3 15th on the grid.

As the race got underway all three drivers fought hard with the surrounding GT cars, making their way through the pack and picking up places. Mike made his way past Rob during the opening laps, but was ultimately punished for jumping the start, earning himself a drive through penalty. After making good progress, while battling with other competitors, Rob spun dropping down to 19th. Mike also had a spin just before pitting to serve his drive through penalty. Jim meanwhile kept the #22 Ligier on track and had a hassle-free stint picking up places from his start position.

Rob was the first of the United Ligiers to pit at the half way point of the race and handed the #23 over to Garett Grist in 16th. Jim followed him in and passed the #22 to Matt Bell in P12, while Mike pitted a lap later to hand over to Wayne Boyd.

After all the pit stops had been completed, the three United Ligiers were 10th, 11thand 12th on track, catching each other as well as the leaders. With 24 minutes remaining the sky turned black and the thunder started, with rain threatening overhead. At 22 minutes Matt was up to eighth place, while Wayne had caught Garett, with the pair less than a second apart. Minutes later, it began to rain and Matt and Garett decided to pit to change to wet tyres. With 11 minutes of the race remaining, Wayne too pitted for wets, luckily for the #24 crew under an FCY that had been called moments before. The race went green with six minutes left on the clock with Wayne now in sixth, Matt in eighth and Garett down in 13th after a pit stop delay. Garett moved up one spot at the chequered flag, finishing 12th, with Wayne and Matt crossing the line sixth and eighth respectively.

The Michelin Le Mans Cup now moves onto Le Mans in France for the Road to Le Mans race – the support race to the 24 Hours of Le Mans – on 13-15 June.

“I said I’d keep it on the black stuff and that’s exactly what I did! I had a really good first stint, I’ve had a good time and I gave the car to Matt in one piece. Unfortunately Matt pitted for wets under green and it cost us potentially a top-five finish but it is what it is so onto the next one.”

“It was an eventful race. I thought Jim was a bit unlucky at the start of his stint. He got held up in some carnage but after that I think that’s the best stint he’s done in the Le Mans Cup since we started in 2017. He got his head down and was really positive through traffic, had improving lap times and I was really happy with the job he did. He’s definitely made steps forward. In my stint, it was a case of getting my head down. We knew rain was coming but we didn’t bank on how much would come all at once! As it started to fall, I was in two minds as to whether to pit or not but I thought it was worth the gamble to be the first one to stop. We stopped on the perfect lap if the FCY hadn’t come a lap later and that unfortunately unravelled the plan. It didn’t cost us any places but we also didn’t make any up either and there were big sways in the grid around us with people benefitting and losing out. I stand by the decision. I think it was worth the gamble but I just had to survive till the end of the thunderstorm, which was certainly interesting. I’ve never been on a race track before when there’s been lightening.”

“We had a good beginning to the race. My first stint started great and I moved up a few spots and was challenging for positions and moving forward. I got caught up in an incident while fighting for another place which put us back a little bit but I handed the car over to Garett just outside the points which is what we were aiming for this weekend. Unfortunately we had a bit of a delay in the pit stop which lost us some time. Garett did a great job charging through the field making up places before the rain hit. It’s unfortunate we were just outside the points but we have a good result coming to us.”

“The last section of the race was crazy. Rob had a great start but unfortunately he had a spin which lost us a few places but it’s his first time racing over in Europe and he’s doing a great job learning it all. Then I got in, I was quite happy with my pace. I caught traffic in one or two bad places, a couple of people I got by well but then there were a few others I think I could have done a better job at passing. I was really happy with the car, but when the rain started to fall I turned on the wipers and the screen smeared really badly and I could barely see so I was really glad to pit. We had an issue in the pit stop which cost us a bit of time. Overall a tough race but I’m also happy with how we got on. "

“My first Le Mans Cup race was actually a lot of fun. It is a really good little series and the competition is great. I didn’t do too well in my qualifying but we started well. Apparently I jumped the start so I got a drive through penalty. But I think my pace was good and I came through the field after that and just battled with the cars around me. Then Wayne got in and we got lucky with some rain and the pit stop under FCY but P6 – we will take that!”

“Our dry pace was really good and we were able to pick off a few cars. I caught up with Garett and it’s always difficult when you catch your team mate because we were very close in pace but it has to be a clean move if you’re going to try and make a pass, but then it started raining which was good because it split us up! We opted to go for another lap which was a bit sketchy but ultimately a good call by our engineer as we were able to pit under FCY. So P6 from where we were earlier on in the race is great, especially in Mike’s first Le Mans Cup race.”

“What a great result for our Le Mans Cup team in challenging conditions towards the end. It’s a shame Garett had the issue in the stop as they too could have been on for a points finish. But still a great effort by everyone.”

“It’s been a tough weekend finding the pace to match the Norma around Monza. However, the drivers and team have kept focused on preparing the best solutions for the race and we ultimately could have had all three cars comfortably in the top-ten. The weather made things exciting but all the drivers have had good personal stints and have certainly enjoyed the race here. Unfortunately, Rob and Garett lost time in the pit stop with an air jack failure which cost them a result they deserved.”