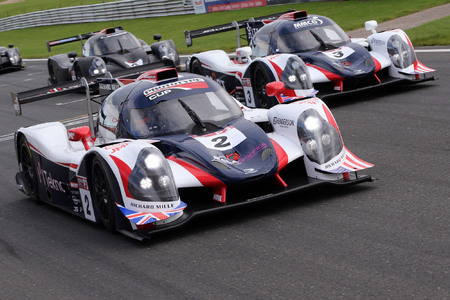 United Autosports also scored a fourth place finish with the #3 Ligier of Jacques Duyver and Charlie Hollings, with a fifth place finish for American duo Patrick Byrne and Guy Cosmo in the #32 Ligier. Shaun Lynn, who piloted the #23 Gulf liveried P3 car finished in seventh.

Five minutes before the start of the race, the rain began to fall making the track slippery, but not wet enough for wet tyres. Unfortunately, Shaun Lynn had a spin on the parade lap, dropping him from second to the back of the grid. Jay Palmer also had a spin on the first lap of the race, which dropped him to the rear. Patrick Byrne, who has never driven an LMP3 car before this weekend, made his way from sixth on the grid to third by the end of his stunning half an hour stint. As the pit window opened, all the drivers stopped to make their driver changes – with the exception of Shaun Lynn, who served his mandatory 70-second pit stop before heading back out again. Wayne Boyd, Charlie Hollings and Guy Cosmo made their way out for the final half of the race, with Wayne setting fastest lap after fastest lap as he closed the gap to the leader by more than a second a lap. Charlie Hollings and Guy Cosmo had an inter-team battle, Charlie ultimately emerging one place ahead of the LMP3 Le Mans lap record holder, Cosmo.

Tockwith Motorsports and their drivers Phil Hanson and Nigel Moore won the first ever Prototype Cup race from pole position, while United Autosports’ ELMS driver, Christian England finished second in the Team West-Tec-run Ligier JS P3. After the race, Wayne was awarded the Sunoco fastest lap of the race award for a Pro driver. Christian England received the same award, but for an Am driver.

The Prototype Cup is organised by Bute Motorsports, promoters of the successful GT Cup. The organisers are working on a full season of racing for 2017, with the calendar to be announced soon. For more information on the championship, visit www.prototypecup.com

United Autosports now head to Estoril, Portugal, for the final round of the 2016 European Le Mans Series on 22-23 October.

“It was a good result for Wayne and I. I did have a spin on the first lap of the race, but I don’t think we could have done much better, given the other driver pairings that were out there today. Great first race and I’m pleased with the result.”

“The race and the whole weekend went very well. Unfortunately Jay had a spin on the first lap, which dropped him back quite a bit from the pack, but he drove really well and did a great job getting back up to the pack for when I was to get in the car. When I jumped in, I was able to get past a few drivers quite quickly and then after that it was just a matter of seeing what our pace was like. We knew the car was very, very good and it wasn’t hard on its tyres, so we knew we could do some good times. We just tried to see what we could get down to during the race and it was nice to be a bit quicker than everyone else.”

“I’ve had a fantastic weekend. I’ve been in the same paddock as United before and I’ve always thought they were one of the most professional teams and they are exactly that – the team is great. I was taking the race steady – I was probably taking it a little too easy, but I’m glad, I enjoyed it. I learnt what the car could do and hopefully the next time I’m in the car – and I really hope I’m in the car again – we can move on from here.”

“It was good fun this weekend. I had a bit of overtaking with Guy in the other United car. I think it’s been a good start for the championship and I think next year it will really take off. I know a few people that are already interested in it so we will have to see what happens.”

“My race was fantastic, I thoroughly enjoyed it. I made some rookie mistakes but that’s to be expected I suppose. My pace was really good and the car was amazing. I was really surprised how the car didn’t take too much out of me. It was really smooth; the brakes were fine, the tyres were fine, the car was easy to drive. I must admit, the whole experience of the weekend with United has been great. I’ve felt really looked after the whole way through – I’m very, very happy. Doing a whole stint on my own was great for me to see how my fitness levels were and I managed it so I’m happy with that.”

“I had a fantastic race. United Autosports really set the car up well, I couldn’t have done it without those guys. Flower (Paul Haigh – #32 engineer) is incredible, he helped us and made us laugh all weekend. The mechanics worked so hard on the car too, the whole set up of United is amazing. The series is epic and I think it’s really going to take off.”

“I have loved my trip to the UK and joining United Autosports again. It was all about Patrick this weekend and getting him acclimatised to this style of car that he has never driven before – he’s done a great job so he learned a lot about downforce and driving on the other side of the race car. The race was fun for me too, I love driving the Ligier. The weather set us back from getting more track time earlier in the weekend but I’m really looking forward to hopefully coming back again next year.”

“It’s been a great weekend. All the drivers have loved it and it was great to have the support of Onroak Automotive/Ligier here too. We’ve proven that the Prototype Cup is real and it is going to happen and the interest already is incredible – it’s even surprised me! We sold a car here that I wasn’t expecting and we’ve taken so many inquiries about cars that are all for the British series so it’s only going to grow. I’m more positive than ever that there is room for a Prototype Cup in the UK.”